The text and photograph on this page are excerpted from a four-volume series of books titled Oncology Tumors & Treatment: A Photographic History, by Stanley B. Burns, MD, FACS, and Elizabeth A. Burns. The photo below is from the volume titled “The X-Ray Era: 1901–1915.” The photograph appears courtesy of Stanley B. Burns, MD, and The Burns Archive. To view additional photos from this series of books, visit burnsarchive.com.

Prior to the 20th century, there were very few specific therapies for disease. Many diseases, especially cancers and infections, resulted in accumulations of fluid or pus in body cavities. Physicians had to become masters of the trocar, needle, and catheter. They learned to artfully remove fluid from various body cavities. Abscesses of the lungs, abdomen, and body joints had to be drained. Testicular hydrocele and hydrocephalus were also treated by direct puncture. Puncture of the pericardium and thoracocentesis were routinely performed. Suprapubic drainage of the bladder was often necessary in cases of blockage due to prostatic disease or infections.

Throughout much of the 19th century, large ovarian cystic tumors were drained through the abdominal wall, often with disastrous effects when infection set in. By the end of the 19th century, physicians learned to use a small cannula and remove the fluid slowly, otherwise “dangerous venous hyperemia” and cardiac complications occurred.

In 1891, Heinrich Quincke, MD, introduced lumbar puncture to relieve hydrocephalus and serous meningitis. By the end of the 19th century, physicians had learned to remove fluids and pus from most of the body’s organs and cavities. The advent of antiseptic technique made these procedures safe. The accumulation of serous fluid in the peritoneal cavity accompanied numerous diseases, and its removal was a routine procedure.

Ascites is the symptom of numerous diseases, especially neoplasms. Dozens of diseases, many since conquered, caused the condition. At the turn of the century, tuberculosis (often termed tubercular hydrops), severe anemia, cardiac failure, peritonitis, and a variety of diseases of the liver, kidneys, and intestines were among the frequent non-neoplastic causes of the condition. Ovarian cysts and abdominal cysts due to infections, as well as distended bladders, were some of the differential diagnostic possibilities.

Regardless of the primary diagnosis, abdominal fluid still had to be removed; if it were not removed, the fluid usually caused death by cardiac and respiratory decompensation. This photograph, published in [Nicholas] Senn’s 1901 text, Practical Surgery for the General Practitioner, depicts a patient in the proper position for tapping for ascites. A black spot marks the area to be punctured. Dr. Senn describes his method of puncturing the abdomen to relieve ascites: 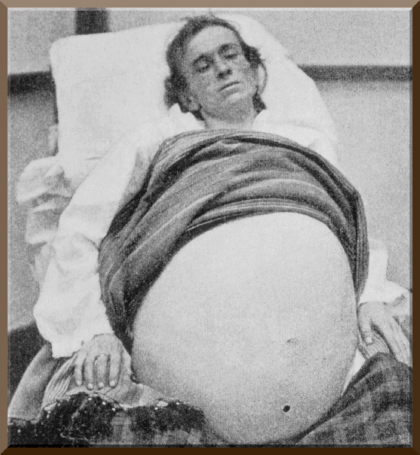 The bladder should be emptied at the time the puncture is made. The patient should be placed in a semi-reclining position, and the abdomen is supported by passing a towel or broad bandage twice around it, crossed in region of the umbilicus, traction being made on the ends by an assistant standing behind the patient. The trochar is sterilized by boiling in a soda solution, and the skin is disinfected in the usual way. The puncture is made in the median line half-way between the pubes and umbilicus. Before the puncture is made, the level of fluid is ascertained by percussion, the tympanitic space above indicating the intestines floating on the fluid.

With one quick movement the instrument is plunged through the entire thickness of the abdominal wall.... The fluid should be withdrawn very slowly.... As the abdomen relaxes, the bandage is drawn sufficiently tight to secure the necessary mechanical pressure. Should the heart’s action at any time show evidence of inefficiency, stimulants are given.... After the completion of the operation, the puncture is sealed with iodoform collodion.... Tapping for tubercular ascites should be followed by injection through the cannula of two or three drams of iodoform glycerin emulsion.... [Dr. Senn notes that this] intraperitoneal iodoform injection on occasion cured the condition after laparotomy and drainage procedures failed.

At the turn of the century, pioneer oncologists attempted to find the answer to carcinogenesis through examination of the ascitic serum of various cancerous conditions. They also attempted to identify the source of the cancer by examining the fluid, testing for cells as well as specific substances produced by various organ systems. Some scientists inoculated laboratory animals with the fluid, attempting to see if “the extract” would develop into cancers. As this was the “age of serology” in immunology, some believed a vaccine could be developed. By 1950, serology and vaccine development proved a relative dead end in immunology. It would ultimately be cell-derived substances that would prove to be of greater benefit in cancer and immunologic therapy. ■