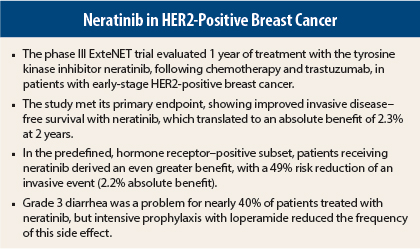 At the time of the study design, there was no protocol-mandated antidiarrheal prophylaxis put in place, but currently three studies have shown that an intensive loperamide prophylactic regimen can successfully reduce the rates of grade 3 diarrhea to 0% to 17%.

Patients with early-stage HER2-positive breast cancer who received neratinib as extended adjuvant therapy demonstrated improved invasive disease–free survival, with an absolute benefit of 2.3% at 2 years.1 However, these results of the ExteNET trial, previously presented at the 2015 ASCO Annual Meeting, are only part of the story. According to secondary data introduced at the 2015 Breast Cancer Symposium, certain subsets derived even greater benefits,2 including those with hormone receptor–positive disease and those pretreated with trastuzumab (Herceptin) sequentially.

“ExteNET is the first study to show a statistically significant improvement in invasive disease–free survival in the intent-to-treat population,” said Arlene Chan, MD, of the Breast Cancer Research Centre, Western Australia, and Curtin University in Perth. “Furthermore, in the centrally confirmed HER2-positive cohort, we are now seeing absolute benefits on the order of 4.1% to 8.6%, depending on the subset.”

The positive results, however, were not met with total enthusiasm by a number of listeners, who considered the toxicity of the drug to far outweigh the benefit.

Neratinib is an oral tyrosine kinase inhibitor of HER1, 2, and 4. In xenografts, neratinib produced dose-dependent and sustained tumor growth regression,3 and in a phase II trial, responses were observed in 24% of patients previously treated with trastuzumab and 56% of trastuzumab-naive patients; 16-week progression-free survival rates were 59% and 78%, respectively.4

The ExteNet trial is an international, multicenter study that enrolled 2,840 patients with locally defined, HER2-positive disease who had been pretreated with adjuvant trastuzumab and chemotherapy. In addition, the estrogen-receptor status of the primary tumor was required for inclusion in the study.

Patients were randomly assigned on a 1:1 basis to receive either neratinib at 240 mg/d for 12 months or placebo. ExteNet’s primary analysis was the invasive disease–free survival for all patients treated who had completed 2 years of follow-up.

The primary endpoint, reported at the 2015 ASCO Annual Meeting, was met in the intent-to-treat population, showing improved invasive disease–free survival for patients receiving neratinib (93.9%) vs placebo (91.6%).1

At the 2015 Breast Cancer Symposium, Dr. Chan presented further data, showing that disease-free survival in the ductal carcinoma in situ subset was also significantly improved, with a hazard ratio of 0.63 and a 2.9% absolute benefit. Also, in the predefined hormone receptor–positive subset, patients receiving 1 year of neratinib derived a 49% risk reduction of an invasive event, translating into a 4.2% absolute benefit.

“In terms of invasive disease, I want to draw your attention to the magnitude of benefit in the distant metastatic disease,” said Dr. Chan. “In the centrally confirmed HER2-positive population, there was a 4.1% absolute difference in the number of patients developing metastatic disease.”

Patients who were both centrally confirmed HER2-positive and hormone receptor–positive derived a significant absolute benefit of 8.6% at 2 years (hazard ratio = 0.25) for invasive disease–free survival, remarked Dr. Chan, although only 765 patients have been evaluated to date.

Further analysis showed superiority in the neratinib arm as well for patients who had received prior trastuzumab sequentially and for patients with both premenopausal and postmenopausal status.

Despite these significant benefits, Dr. Chan acknowledged neratinib’s safety concerns. The predominant side effect was diarrhea, with up to 40% of patients experiencing a grade 3 event.

“We’re very cognizant that this is a side effect that we need to address,” admitted Dr. Chan. “It’s noteworthy that at the time of the study design, there was no protocol-mandated antidiarrheal prophylaxis put in place. Only 1.4% of patients were actually hospitalized for this side effect,” she added, “and there was no difference in other adverse events between neratinib and placebo groups.”

Dr. Chan suggested that loperamide might provide a solution to this side effect. “Currently, three studies have shown that an intensive loperamide prophylactic regimen can successfully reduce the rates of grade 3 diarrhea to 0% to 17%,” she indicated. “With a mandatory, intensive loperamide program in the first 30 days of neratinib, we’re confident that we can reduce this side effect very significantly,” Dr. Chan concluded. ■

Disclosure: Dr. Chan has consulted for Pfizer; has been on the speakers bureau for Pierre Fabre, Amgen, and Novartis; and has received travel funds from Pierre Fabre.