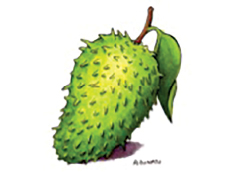 The use of dietary supplements by patients with cancer has increased significantly over the past 25 years despite insufficient evidence of safety and effectiveness. Finding reliable sources of information about dietary supplements can be daunting. Patients typically rely on family, friends, and the Internet, often receiving misleading information.

The ASCO Post’s Integrative Oncology series is intended to facilitate the availability of evidence-based information on integrative and complementary therapies commonly used by patients with cancer. We chose graviola for this issue because of the growing interest of cancer patients in the herb’s anticancer potential.

A small, evergreen tree that belongs to the custard apple family, graviola is a native of the tropical areas in Central and South Americas and the Caribbean. Graviola produces heart-shaped edible fruits, the pulp of which is used to make drinks and sherbets.

Graviola also has a long history of medicinal use for treating inflammatory conditions, diabetes, hypertension, insomnia, parasitic infections, and cancer. All parts of the tree including the bark, leaves, fruits, and roots are used in herbal medicine.

Interest in graviola as a potential anticancer agent surged following the discovery of its cytotoxic property in a 1976 plant-screening program by the National Cancer Institute. Annonaceous acetogenins, extracted from different parts of the tree, were found to have cytotoxic effects. These observations have yet to be confirmed in clinical trials. Nevertheless, despite lack of substantial evidence, graviola is heavily promoted as a cancer-fighting herb.

Products containing graviola are available in health food stores and via the Internet in the form of capsules, liquid extracts, juice blend, teas, and tinctures.

In a rodent model of hepatic cancer, bullatacin, an acetogenin derived from graviola, caused hepato- and nephrotoxicity by increasing calcium concentration, reactive oxygen species production, and expression of the apoptosis regulator Bax and the Bax/Bcl-2 ratio.12

Of concern are findings that alkaloids extracted from graviola can cause neuronal dysfunction and degeneration.14,15 Graviola also may decrease the uptake of radiopharmaceuticals used in nuclear imaging.16

Antidiabetics and antihypertensives: Graviola may have additive ­effects.7,17 ■

The Integrative Medicine Service at Memorial Sloan Kettering Cancer Center developed and maintains a free website—About Herbs (www.mskcc.org/aboutherbs)—that provides objective and unbiased information about herbs, vitamins, minerals, and other dietary supplements, and unproved anticancer treatments. Each of the close to 300 and growing number of entries offers health-care professional and patient versions, and entries are regularly updated with the latest research findings.