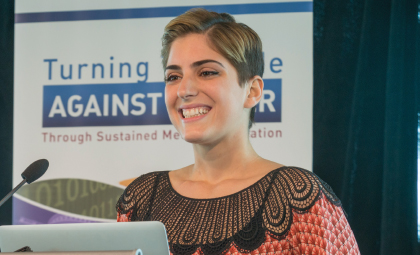 Suleika Jaouad addressed the unique challenges and issues faced by young adults with cancer at the “Turning the Tide Against Cancer Conference.” Photo by Liz Roll.

Whether we’re too embarrassed or shy—or worried that a discussion about cost might affect the quality of our care—it’s clear that both doctors and patients need to do more communicating. We talk about everything else, so why shouldn’t cost be a part of that conversation?

Suleika Jaouad, a journalist, was 22 and had just gotten her first chance to cover a major news story—the revolution underway in Tunisia—when she was diagnosed with myelodysplastic syndrome that had evolved into acute myeloid leukemia (AML).

Months into her treatment, she began to write again, but this time with a strong focus on the unique challenges—psychosocial, clinical, and financial—that confront young adults with cancer. “Nine months, eight hospitalizations, and seven chemotherapy treatments later, I’m realizing that age is an inextricable component of how we experience cancer,” she wrote in one of her first columns in the series “Life, Interrupted,” published in The New York Times.

Now 26 and a cancer survivor, her work is reaching not only fellow patients and the general public, but also cancer professionals. At a recent meeting in Washington, the second national conference on Turning the Tide Against Cancer Through Sustained Medical Innovation, she spoke to oncologists and policy experts about the special challenges of young adults with cancer.

Twenty-somethings are oncology’s ‘tweens,’ she said. They don’t fit in the pediatric cancer world with its many dedicated centers or in the cohort of older adults who oncologists see most often. Their survival rates have improved little over the past decades compared with the rising rates in childhood and some common adult cancers.

Most important, many of the issues they care most about—independence, relationships, developing careers, the long-term health effects of treatment—inform and influence their interactions with their oncologists.

Turning the Tide Against Cancer was convened by the Personalized Medicine Coalition, the American Association for Cancer Research, and Feinstein Kean Healthcare to explore two major themes: patient-centered care and how to address cost and value in ways that align with patient-centeredness. Ms.
Jaouad’s insights into the world of young adults with cancer clearly underlined the importance of both issues.

“Where cancer is concerned, it’s safe to say there’s no such thing as good timing. But having a life-threatening disease in your 20s carries a special set of psychological and social challenges,” Ms. Jaouad wrote in one of her early ­columns.

“Overnight, I lost my job, apartment, the opportunity to cover the revolution in Tunisia,” she said at the meeting. “I moved back home, into my childhood room.”

After a cancer diagnosis, relationships are altered, with both friends and family. In an award-winning video series, also titled “Life, Interrupted,” Ms. Jaouad’s mother says, “As a mother of a young adult with cancer, you have to learn to stand back…. I wanted to do everything for her; that was not what she wanted.” She and her brother, who would be her bone marrow donor if she were able to have a transplant, describe the complexity of their feelings in another video in the series. Relationships with friends became, at least initially, awkward in some cases, the subject of another column.

And then there was the relationship with her doctors. Like many patients of all ages, Ms. Jaouad soon found herself immersed in a world of unfamiliar terms and concepts. “I made it my job to learn as much as I could about AML,” she said. “But it was a bigger challenge than expected. My doctor was one of the best, but I was lost in any conversation.”

The vitalness of communication became painfully clear when she learned, by using Google, that the chemotherapy she was to undergo in less than a week would make her infertile.

“I don’t want to criticize, but the absence of information felt like a breach of trust,” she told the meeting. “I understood that receiving chemotherapy was the priority and that fertility preservation wasn’t always a possibility, but I wanted to be part of the conversation.”

‘Something Called a Clinical Trial’

After fertility treatments, Ms. Jaouad went ahead with chemotherapy. But it soon became clear that the standard regimen was not working, and the cancer was growing more aggressive. She then “learned about something called a clinical trial,” and despite feelings of terror at being a guinea pig, decided with her doctor to go ahead.

“At a time when everything seemed so uncertain, I craved hard facts, statistics, and proof that my cancer treatments were worth the havoc they wreaked on my mental and physical health,” she wrote in her column. “My doctors had no certain answers for me. After a few sleepless nights, I hesitantly agreed to try it. After all, I had very few other options left….”

The cost of treatment is another issue with a special overlay for her age group. Like many young adults with cancer, she relied on her parents’ health insurance. But she would lose that at age 26. Even with that insurance, out-of-pocket costs were high, and the time was approaching when they could get much higher.

The idea of discussing finances during a doctor’s appointment made her uncomfortable, she wrote. She found that she was not alone. But she also found a study suggesting that when patients do talk to their doctors about costs, ways are often found to reduce them.

“Whether we’re too embarrassed or shy—or worried that a discussion about cost might affect the quality of our care—it’s clear that both doctors and patients need to do more communicating,” she wrote. “We talk about everything else, so why shouldn’t cost be a part of that conversation?”

For 4 of the 8 months, Ms. Jaouad was hospitalized with infections, including septic shock. But the decision paid off. Her condition improved enough to make it possible to receive a bone marrow transplant (BMT). And from the BMT unit, she saw her first “Life, Interrupted” column and video published in The New York Times.

In one column, she explained her decision to write about the world of young adults with cancer: “Isolated in the oncology ward, I began to think about my dream to become a writer. What could I possibly write about now? Where could I travel if I was stuck to an IV pole? Maybe the story wasn’t in a faraway land but right in front of me. I hadn’t chosen this story—it had chosen me. But I decided to accept the challenge.” ■