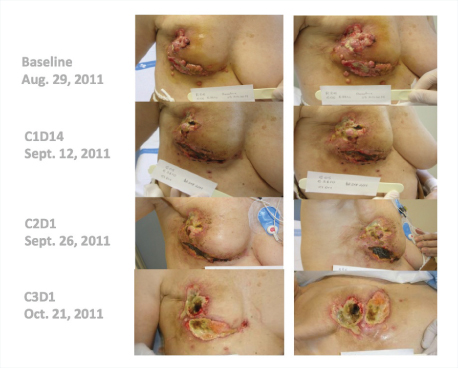 Several sessions at the 2012 European Society for Medical Oncology (ESMO) Congress in Vienna focused on novel targeted therapies in various stages of development. Summarized here are data on two promising drugs for breast cancer and two for prostate cancer.

Aberrant fibroblast growth factor signaling can promote tumor development by directly driving cancer cell proliferation and survival and by supporting tumor angiogenesis, explained Rodrigo Dienstmann, MD, of Vall d’Hebron University Hospital in Barcelona. FGFR1 (8p 11-12) amplification is observed in 10% of breast tumors, predominantly those of the luminal subtype, and is often associated with resistance to endocrine treatment and poor prognosis. Additionally, fibroblast growth factor 3 (11q 12-14) amplification is seen in 15% to 30% of breast tumors and is associated with aggressiveness.

The study evaluated E-3810 (15 and 20 mg) in 15 patients with breast cancer who had received a median of four prior lines of therapy. Among them, 12 patients had fibroblast growth factor–positive tumors with FGFR1 or 11q amplifications while the other three had previous treatment with antiangiogenics.

Toxicities of E-3810 were mostly related to antiangiogenic effects, and these were manageable and reversible upon dose reductions.

BKM120 Plus Trastuzumab in HER2-positive Disease

In another global phase Ib/II study, patients with HER2-positive advanced breast cancer resistant to trastuzumab (Herceptin) received the pan-PI3 kinase inhibitor BKM120 in combination with trastuzumab.2 PI3K/mTOR pathway signaling is important for the oncogenic function of HER2. Activating alterations of this pathway are frequently observed in HER2-positive breast cancer and generally herald a poor response and resistance to trastuzumab, explained Barbara Pistilli, MD, of the Macerata Hospital in Macerata, Italy, who presented the findings.

Among the 50 patients, who had received a median of 2.5 prior lines of HER2-directed therapy, the experimental combination yielded an overall response rate of 10%, including 1 complete response (2%) and 4 partial responses (8%); stable disease was observed in 21 patients (42%), for a disease control rate of 52%, she reported. Preliminary evidence of clinical activity in the brain was also observed, as all three patients with target brain lesions at baseline achieved stable disease. “One such patient is still on the drug at 30-plus weeks,” Dr. Pistilli noted.

Adverse events were generally manageable and reversible. Mood alterations have been observed, but it is unclear whether these are drug-related, she said.

ODM-201 is a novel androgen receptor antagonist currently in phase I/II development. Preclinical data suggested that the drug does not penetrate the blood-brain barrier and does not exert partial agonist activity, as does bicalutamide. At the ESMO meeting, a proof-of-concept, first-in-man, dose-escalation study showed promising results with the new agent. ODM-201 reduced the levels of prostate-specific antigen (PSA) in men with progressive metastatic castration-resistant prostate cancer.3

Among 15 evaluable patients, 13 (87%) had a decrease of 50% or more in PSA level at 12 weeks; all 6 patients pretreated with docetaxel achieved a PSA decline at 12 weeks. At 12 weeks, partial response or stable disease was seen in all patients, and stable disease in bone was observed in 90% of patients.

In 21 treated patients, ODM-201 has been well tolerated, with no major treatment-emergent adverse events. No dose-limiting toxicities were identified. The most common adverse events were grades 1 and 2 gastrointestinal problems, such as diarrhea and nausea.

“The numbers of patients are few, and it is not clear what the recommended dose should be for phase II and III trials,” Dr. Carles commented.

Speaking about ODM-201 and OGX-427, Dr. Carles said that both drugs represent potential new agents for the treatment of castration-resistant prostate cancer. If these drugs are approved, the challenge will be how to integrate them with other newly approved drugs in this setting to identify the best combinations and optimal sequencing. ■

Disclosure: Dr. Turner has consulted for and received honoraria from Novartis and EOS. Dr. Chi has received research funding from OncoGeneX. Drs. Dienstmann, Pistilli, and Carles reported no potential conflicts of interest.

Commenting on the studies evaluating novel agents in breast cancer, Nicholas Turner, MD, PhD, of the Royal Marsden Hospital in London, observed that for BKM120 plus trastuzumab (Herceptin), the “benefit appears to be in only a relatively small proportion of patients, but in those patients there is...