Treatment Goals, Molecular Monitoring, and the Role and Use of Guideline Recommendations 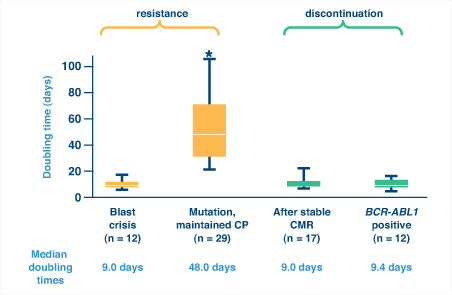 Fig. 1: BCR-ABL1 doubling times according to clinical context. The kinetics of the rise can be measured as the number of days over which BCR-ABL1 doubles. *Significant differences between the doubling times (P < .0001), compared with the blast crisis, discontinued in CMR and complete interruption groups. CMR = complete molecular response; CP = chronic phase. Reprinted with permission from Branford S et al.6

Rapid rise and fall [of BCR-ABL1 levels] is very characteristic of a patient with poor compliance.

The importance of achieving a certain level of response with imatinib (Gleevec) by 3 months in patients with chronic myeloid leukemia (CML) had previously been established in the IRIS (International Randomized Study of Interferon and STI571) trial.1 Analysis of data from this trial showed that patients who had BCR-ABL transcript levels of 10% or greater at 3 months had a low chance of achieving a major molecular response. It has since been demonstrated that early BCR-ABL transcript levels are also predictive of future molecular response and long-term outcomes in patients treated with nilotinib (Tasigna) and dasatinib (Sprycel).2,3 For example, a landmark analysis of the ENESTnd (Evaluating Nilotinib Efficacy and Safety in Clinical Trials—Newly Diagnosed Patients) trial demonstrated extremely good 3-year progression-free survival in patients receiving nilotinib who had BCR-ABL levels of 1% or lower at 3 months compared with those having levels greater than 10% (95.6% vs 82.9%, P = .14).2

Timothy Hughes, MD, MBBS, Clinical Professor, Department of Medicine, Centre for Cancer Biology, in Adelaide, South Australia, introduced a case of a young man with high-risk chronic-phase CML to illustrate the importance of molecular monitoring. The patient initially received imatinib, but was switched to nilotinib after 1 month due to intolerance and subsequently achieved a rapid reduction in BCR-ABL level (according to the standardized International Scale) to less than 1% within 3 months of starting nilotinib. One would thus expect this patient to have a good response; this was supported by a very steep ongoing decline in BCR-ABL transcripts at 6 months and continuing at 9 months, at which point BCR-ABL was undetectable. In fact, according to European LeukemiaNet criteria for optimal response to imatinib (ie, achievement of major molecular response by 18 months),4 the patient was ahead of schedule having achieved this milestone within 6 months of starting therapy.

Continued molecular monitoring demonstrated a 2-log increase in transcript levels to 0.1% by 15 months, and when asked how to proceed, the majority of audience respondents indicated that they would repeat quantitative reverse-transcription polymerase chain reaction on a monthly basis and perform a mutation screen. According to European LeukemiaNet recommendations4 and National Comprehensive Cancer Network Clinical Practice Guidelines,5 both strategies are recommended in cases of such increased transcript levels. After a decline to 0.01% by 18 months, a rapid rise to above 1% was seen by 21 months, triggering a mutation screen and cytogenetic analysis. No mutations were detected. The patient had experienced a cytogenetic relapse (8/20 Philadelphia chromosome–positive cells) but was still in chronic phase.

Based on these findings, the majority of respondents would switch to another second-generation tyrosine kinase inhibitor with or without an allograft within 3 to 6 months due to the loss of complete cytogenetic response. However, further questioning of the family identified nonadherence as the cause of the fluctuating BCR-ABL levels.

“The hint in this patient was this fluctuating level up and down, because you virtually never see that sort of pattern in a patient,” noted Dr. Hughes. “You do not have a log rise and log fall in a patient who has acquired resistance.” With medication monitoring by the patient’s mother, the patient again achieved a deep molecular response.

So how can one distinguish between nonadherence and resistance as a cause for a lost response? A recent study of BCR-ABL kinetics demonstrated that BCR-ABL doubling time could help distinguish nonadherence from resistance and was actually more reliable than fold-rise in BCR-ABL transcripts.6 Rapid kinetics (ie, short doubling times) can indicate blast crisis or, interestingly, relapse after imatinib discontinuation, either after complete molecular response or while BCR-ABL is still detectable. Both suggest complete loss of kinase inhibition (Fig. 1). In contrast, slow kinetics (ie, long doubling times) are typical with the emergence of BCR-ABL mutations in patients who maintain chronic phase, suggesting partial loss of kinase inhibition.