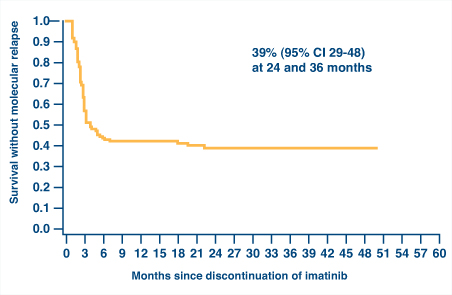 Fig. 1: Overall probability of complete molecular response maintenance after discontinuation of imatinib in STIM trial. Molecular relapse occurred in 61 patients, with 58 relapses occurring during the first 7 months and 3 late relapses at month 19, 20, and 22, respectively. Reprinted with permission from Mahon F-X et al.1

In the confines of a closely monitored clinical trial, where you have documented stable complete molecular response for 24 months, [and] follow them with monthly polymerase chain reaction with a sensitive test, it seems to be appropriate and safe to stop therapy and watch those patients.

In chronic myeloid leukemia (CML), continued long-term therapy that prevents both progression to accelerated-phase disease and the emergence of resistance may be thought of as an “operational” or “functional” cure. However, long-term disease control without the requirement for continuous treatment is currently being sought, and there is much ongoing investigation in developing strategies to eradicate leukemic stem cells.

Timothy Hughes, MD, MBBS, of the Centre for Cancer Biology, Adelaide, South Australia, introduced this discussion with a case of a 30-year-old female patient with CML. She is currently receiving imatinib (Gleevec) at 600 mg/d and had achieved a complete cytogenetic response by 18 months. However, she has not yet achieved a major molecular response. The patient hopes to start a family soon, and was looking to her clinician for guidance as to when it would be safe to proceed. She questioned if switching to nilotinib (Tasigna) or dasatinib (Sprycel) would provide a greater chance of achieving a stable response, offering an opportunity for her to stop therapy while attempting a pregnancy.

It is desirable to achieve a deep molecular response in this situation based on observations from the French STIM (Stop Imatinib) study (Fig. 1)1 and the Australasian Leukaemia & Lymphoma Group CML8 trial of imatinib withdrawal.2 Both studies have shown that about 40% of patients who achieved a stable complete molecular response of at least 2 years duration could maintain that response after discontinuation of imatinib. Thus, these data may provide both hope and guidance for the patient.

“I think that in the confines of a closely monitored clinical trial, where you have documented stable complete molecular response for 24 months, where you follow them with monthly polymerase chain reaction with a sensitive test, it seems to be appropriate and safe to stop therapy and watch those patients,” Hughes noted. “But that should not be translated into stopping in a situation where you have suboptimal molecular monitoring or it is not possible or realistic to monitor those patients very, very closely.”

Jorge Cortes, MD, asked whether one could just increase the dose of imatinib in this case. Dr. Hughes agreed that, based on data from the ENESTnd study, it could increase the probability of achieving a major molecular response. There was some discussion, however, regarding the need to consider the speed of obtaining the response, with imatinib acting more slowly. Use of interferon always remains an option during pregnancy. ■