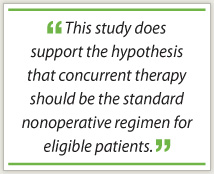 “There were statistically significantly higher rates of acute esophagitis in both concurrent arms than in the sequential arm, with grade 3 or worse rates of 4%, 22%, and 45% for arms 1, 2, and 3 respectively,” the investigators reported. “Of interest was the lack of difference in late esophagitis rates among these arms, with rates of 1% to 4% among the three arms.

The authors pointed out that most patients with stage III NSCLC have functional status and comorbid conditions that would disqualify them from participating in the study and less able to tolerate the severe esophagitis observed with concurrent therapy.

“This study does support the hypothesis that concurrent therapy should be the standard nonoperative regimen for eligible patients,” the authors also noted. “Promising phase II reports of newer chemotherapeutic regimens, including taxane-based regimens, delivered concurrently with [thoracic radiotherapy] continue to be published and will require additional testing to define the optimal regimen.” ■