On June 5, 1981, the CDC issued a warning about a rare type of pneumonia discovered among a small group of young gay men in Los Angeles, later determined to be AIDS-related, ushering in the HIV/AIDS epidemic. Early on, AIDS-related malignancies brought the oncology community into this formidable socio-clinical puzzle. One of the first oncologists on the front lines of the nascent AIDS phenomenon, internationally regarded AIDS/lymphoma expert, Alexandra Levine, MD, MACP, Chief Medical Officer of City of Hope Comprehensive Cancer Center in Duarte, California, shared her experiences with The ASCO Post.

What prompted your introduction into HIV/AIDS research and treatment? 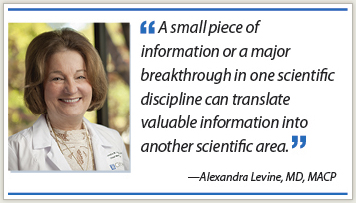 In 1982, a young man came to my University of Southern California county hospital office with enlarged lymph nodes. I thought he had Hodgkin disease, so I arranged a lymph node biopsy. I remember looking at the tissue under a microscope with Dr. Robert Lukes, Head of Hematologic Pathology at USC. Dr. Lukes had a magnificent eye, seeing things that others could not. To my surprise, he said this pathology was something he’d never seen before.

I went back to the patient and got a detailed background and history. He was a young gay man, and from our conversation it was obvious that he’d had a multitude of potential pathogenic exposures. I asked if he would let me follow-up with him on a routine basis. I didn’t know what the diagnosis was, just that it was a lymphoid reaction to something, and not a malignancy. The next day he returned to my office with one of his prior sexual partners who also had enlarged lymph nodes. I biopsied him and it was the exact same “unidentified” clinical issue.

Within a month there would be a group of about 20 young men waiting at my office in the morning, all with grossly enlarged lymph nodes. At that point, I was faced with an unbelievably difficult and interesting clinical puzzle. I began to follow all of these men.

About that time, I also saw my first case of what turned out to be AIDS-related lymphoma in a young gay man with extremely aggressive disease, disseminated in multiple organs throughout his body. It turned out to be B-cell lymphoma. AIDS was not yet described at the time, and was instead called GRID (gay-related immune deficiency).

I sent out a grant to the NIH to study these patients. The hypothesis again was that this reaction, which later became known as persistent, generalized lymphadenopathy—one of the initial AIDS-related complex type of illnesses—was a prodrome to the development of B-cell lymphoma, and that by following the patients carefully with repeat biopsies I might be able to find (and understand) the moment of transformation to malignant lymphoma. And that’s how I entered the AIDS era.

Learning from the AIDS Experience

What can the cancer community learn from the AIDS clinical and research experience?

There are so many lessons. From a nonscientific perspective, I learned about the importance of activism. If not for the early AIDS activists, the cancer community would have been much slower in gearing up its own advocacy efforts, which drive research funding and force the scientific community to gear up its efforts. After all, we are all in this together. 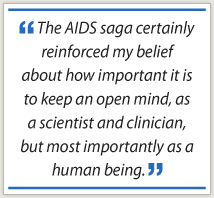 Also, a small piece of information or a major breakthrough in one scientific discipline can translate valuable information into another scientific area. In the AIDS experience, aside from mechanisms of oncogenesis, the knowledge I gained treating HIV-infected patients was invaluable to my current treatment of immunosuppressed patients with lymphoma and other malignancies. Many cancer therapies cause severe T-cell depletion, and patients receiving such treatment are at risk for many of the infections we saw during the AIDS epidemic.

I was able to take from that experience knowledge about the use of prophylactic antibiotics, incorporating them into the treatment of patients with various hematologic malignancies whose treatment caused T-cell deficiency and therefore had increased risk of infections. The use of various anti-infectives in HIV-infected patients was a big take-home lesson that has carried over into the practice of oncology, especially in immunosuppressed patients.

The antiretroviral drugs seemed miraculous when they were first developed, and some of those drugs have been used with success in lymphoproliferative malignancies. Learning how to apply combination drugs in a targeted way, such as highly active antiretroviral therapy (HAART), is an example of therapy taken from the oncology community and applied in the AIDS population with great success. So, passion, cutting-edge science, and the expanded knowledge from one condition to another all worked together in a way that has helped us care for many different conditions.

Man of Thousands of Ideas

You had the privilege of working in the laboratory with the distinguished virologist Jonas Salk. Please give us a sense of that experience. 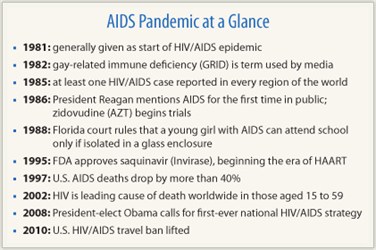 That period was one of the blessings of my life. Jonas was a man of thousands of ideas, and he’d call me at all hours of the night to share them. Some of his ideas bordered on crazy, but others were sublime in their crystalline vision. He was alive in a way that most humans only dream of.

Sadly, he didn’t get the respect he deserved from the scientific community. He was working on an AIDS vaccine, which wasn’t given proper testing by the FDA. Supposedly the agency’s concern was the possibility that a live virus might somehow become a biohazard, although studies disproved that premise.

We presented the data at various meetings, but in the end, the FDA did not allow us to proceed. Jonas was employing concepts he used in developing the polio vaccine, and the younger scientists were dismissive, saying that they had genetic engineering and other high-tech tools at their disposal that were far more effective than older methods.

Now, we are more than 30 years into the AIDS pandemic and still no vaccine exists, leaving me to wonder if Jonas’s might have worked. I wish that we could have tested the vaccine in an appropriate way. During a PBS interview, Bill Moyers asked Jonas if he thought we would ever find the cure for AIDS. And Jonas said with casual aplomb, “Yes, we have the answer.” Moyers sat bolt upright and said, “You have the answer?” Jonas said, “Yes, it’s right here in nature; we’re just not asking the right questions, but when we do, we’ll find the cure.” That was Jonas.

What are your current research interests?

I’m very interested in the relationship between chronic inflammation and infections in the oncogenic process. That whole area of research is beyond fascinating to me, so that’s where much of my efforts will go.

As a humanitarian, any last thoughts?

The AIDS saga certainly reinforced my belief about how important it is to keep an open mind, as a scientist and clinician, but most importantly as a human being. We’re all so sure that we know all the answers about the inner workings of another person’s mind related to the way they behave, but we don’t. If you approach life with that kind of mindset, you’ll walk out being smaller.

Working with so many people who were desperately sick, many of whom died, gave me a greater ability to find something beautiful in just about any person. You can learn almost everything you want to know about human behavior by sitting at a patient’s bedside and listening. My life has become bigger and richer by sharing these intimate times with people from all walks of life I otherwise would never have known.

Throughout the millennia of human history, we’ve only had effective medicines for about 100 years. Yet we have always had healers, and they had to have been effective in one way or another or the profession would not have survived. So, if they didn’t have the medicines, what did they have? They had what my colleagues and I had in 1981 and 1982—the ability to be there for our patients, to give hope and comfort. I’m certainly not saying that the human connection replaces the medicinal benefits of miraculous therapies like HAART, but as we learned from AIDS, when you combine human kindness with scientific drive, you pave the road for unlimited success. ■