Global clinical trials have many advantages and are essential in many disease settings, but there are also challenges that confront global industry-sponsored research, said Sandra Horning, MD, Senior Vice President and Global Head of Clinical Development in Hematology/Oncology for Genentech (Table 1). 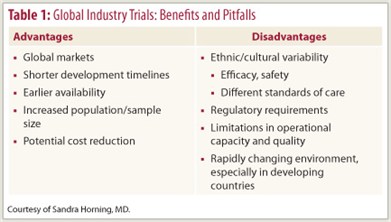 “Because cancer has an international public health impact, people with cancer in all regions of the world can benefit from the knowledge gained in global clinical research,” said Dr. Horning, who discussed the current state and future direction for global trials at the 2011 European Multidisciplinary Cancer Congress in Stockholm.1

The density of global trials is increasing outside of Europe and North America. The United States and Japan still host the most trials, but the landscape is shifting. China (where cancer is the leading cause of death) now ranks 3rd, having moved ahead of Germany, France, and Italy. Brazil is now ranked 7th, and India is expected to become the 8th most common site for clinical trials by 2015. Russia is also a fast-growing trials site, while the United Kingdom and Canada are dropping in the ranks.

The international flavor of trials is quickly becoming obvious. For example, the intriguing T-DM1 breast cancer data presented at this meeting (see The ASCO Post, November 1, page 8) came from a phase II Genentech-sponsored trial in which 75% of the participants were from outside the United States.2 “This is likely the way forward,” Dr. Horning said.

‘Wider Net Must Be Cast’

As more is learned about the molecular heterogeneity within tumors, larger populations are needed from which to select subjects. “A wider net must be cast to target molecular subsets,” Dr. Horning noted. But while expanded populations and reduced cost are advantages to going global, industry faces many challenges in doing so.

Ethnic variability is a main concern. Differences in disease biology can influence clinical outcomes and drug tolerability. This has been repeatedly shown in studies enrolling both Asian and Caucasian patients, such as trials of anti-EGFR agents in lung cancer and bevacizumab (Avastin) in gastric cancer, where outcomes have differed by ethnicity and/or region. It is possible that biomarkers even differ by ethnicity, she said.

“Differences in the underlying biology of cancers and their hosts by ethnicity and geographic region are becoming apparent and require additional study. Biology is speaking to us,” she commented. “We now include more pharmacokinetic and pharmacodynamic analyses in the early stage of drug development.”

While population demographics and genetics vary by site, so do medical practice and the available resources for care. Both can affect postprogression treatment and, therefore, prognosis.

Finally, regulatory requirements are not globally consistent. Clinical data requirements vary by country, as does the “scientific advice” that underlies all trials and the details regarding how trials are conducted.

“Variability in regulatory requirements represents a major challenge for timely industry-sponsored trials,” Dr. Horning said. This all comes together as “a balance of timelines, requirements, and markets.”

“We have a celebration of diversity, ethnicity, and genetics in cancer research, but this leaves us with some questions,” he offered. “With such heterogeneity, we have to determine if global trial results are representative of all populations. Biology is king, and the more we understand that, the better our results will be.” ■