The use of intensity-modulated radiation therapy (IMRT) is associated with fewer acute and late toxic effects than is three-dimensional conformal radiation therapy (3D-CRT) in men with localized prostate cancer, according to preliminary analysis of the Radiation Therapy Oncology Group (RTOG) 0126 prostate cancer trial, presented at the Plenary Session of the 53rd American Society for Radiation Oncology Annual Meeting, in Miami Beach.1 “This study supports the continued use of IMRT in the management of prostate cancer,” said Jeff Michalski, MD, a radiation oncologist at Washington University Medical Center in St. Louis and lead investigator of RTOG 0126.

In this phase III dose-escalation trial, a total of 748 men were randomly assigned to the high-dose arm. Of this group, 491 received 3D-CRT and 257 received IMRT. The median follow-up was slightly longer for 3D-CRT than for IMRT (4.6 years vs 3.5 years), as IMRT was permitted about a year after the study had begun. The prescribed dose on the high-dose arm was 79.2 Gy, compared with a standard dose of 70.2 Gy with 3D‑CRT.

“Because IMRT requires a more intense level of quality assurance, the study began initially only with 3D-CRT.  Once we had established both the quality assurance and appropriate target volumes for IMRT, we amended the protocol to allow institutions that passed the necessary credentialing guidelines to enroll patients with that modality,” stated Dr. Michalski. Based on the dosimetric comparisons to the bladder and rectum, there was a significant reduction in all dose parameters among patients receiving IMRT, he added.

Reduction in Grades 2+ and 3+ Toxicity 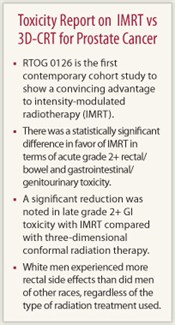 In terms of acute grade 2+ rectal/bowel and gastrointestinal/genitourinary toxicity, the investigators found a statistically significant difference in favor of IMRT. “We saw a reduction of these toxicities in 15.1% with 3D-CRT vs 9.7% with IMRT,” revealed Dr. Michalski. Multivariate analysis indicated a significant 28% reduction in grade 2+ GI toxicity with IMRT.

IMRT significantly lowers the high dose volume of radiation delivered to the bladder and rectum, with less grade 2+ GI toxicity, concluded Dr. Michalski. “This is the first contemporary cohort to show a convincing advantage to IMRT,” he said.

The preliminary findings of RTOG 0126 demonstrated a significant increase (15%) in rectal side effects among white men compared with men of other races, regardless of the type of radiation treatment administered. Although nonwhite patients had a lower incidence of acute grade 2+ GI toxicity, there was no difference in late grade 2+ GU toxicity.

“The racial differences were definitely surprising, and we are still unsure as to why this exists,” admitted Dr. Michalski. “Although it could be a real difference in the tolerance to treatment, it could also represent cultural differences in reporting side effects and physician interpretation of patient descriptions.” This interesting finding is worthy of further investigation, he concluded. ■

SIDEBAR: Expert Point of View: Fewer Rectal Side Effects with IMRT than with 3D-CRT for Prostate Cancer

Expert Point of View: Fewer Rectal Side Effects with IMRT than with 3D-CRT for Prostate Cancer

Although the early toxicity findings of RTOG 0126 seem to favor IMRT over 3D-CRT, formal discussant of this trial, Juanita Crook, MD, FRCPC, of the British Columbia Cancer Agency, Kelowna, British Columbia, Canada, put the study’s findings in perspective. “Whether or not this is a significant...