The issue of chemotherapy drug shortages continues with no end in sight. Many heartfelt human interest stories have been told on television, in newspapers, and even to Congress, but the bottom line is that little, if any, action has been taken.

News of the generic chemotherapy drug crisis hit the airwaves in April, when the shortage of cytarabine, an irreplaceable chemotherapy drug essential to the cure of acute myeloid leukemia (AML), was used to highlight the issue of inadequate supplies of mostly generic drugs. The problem is unique to the United States. 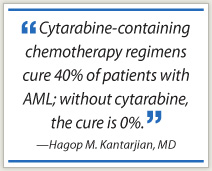 Cytarabine-containing chemotherapy regimens cure 40% of patients with AML; without cytarabine, the cure is 0%. This shortage potentially affected thousands of patients who were diagnosed with AML and treated in the approximately 6-month period when cytarabine was out of stock. Today we face a shortage of the second most important drug in AML, daunorubicin. Fortunately, this drug can be replaced by idarubicin with potentially different toxicities. Still, daunorubicin is used in many of the leukemia clinical trials in AML in this country, and its shortage has created havoc in AML research.

Pundits and politicians wring their hands but offer few solutions. The solutions are, in fact, straightforward if we look closer at the root causes. So far, the shortages have been explained by a variety of factors, such as insufficient raw materials, manufacturing flaws, overzealous FDA enforcement, regulatory rules leading to shutdown of plants, and consolidation of generic companies. There is little actual data to support any of these reasons as the cause of the chemotherapy shortages.

Let us follow the money and contemplate two more plausible explanations: (1) the Medicare “ASP+6” rule, and (2) hoarding of medications by distributors (politely referred to as a “gray market”). The ASP+6 rule was included in the 2003 Medicare legislation, capping at 6% the amount over the average sales price that Medicare reimburses physicians for drugs used in their practices. The average sales price includes many pharmaceutical company discounts and rebates provided to large buyers and can be significantly less than the price paid by a small-town oncology practice. This means that many doctors are already “underwater” when they buy the drug, like homeowners who owe more money on their houses than they are worth. Medicare also mandates that the price cannot increase more than 6% every 6 months, leaving little flexibility for reimbursable prices to adapt to a free market of supply and demand.

To put it simply, Medicare reimburses physicians for chemotherapy drugs at 6% above an average sales price, whose calculation is flawed at best. When such a drug becomes generic, initial competition reduces the price drastically, weeding out weaker manufacturers and leaving fewer to produce the drug. The profit margin for these drugs is small to begin with and can only be adjusted every 6 months. Because there is no such rule in Europe, the prices of generic drugs are slightly higher than in the United States, and the prices of brand name drugs are lower (because of agreements between governments and drug companies), ensuring an enduring and reasonable profit margin. No shortages of generic drugs have been reported in Europe.

In the United States, the solution is simple: Revise the Medicare rule so that generic drugs could be priced at 10% to 20% of the price of the brand-name equivalent, depending on the price of the brand name, and allow for price adjustments of 10% to 20% every 6 months based on changes in the average sales price. This ensures manufacturers a reliable profit margin and offers an incentive to continue producing the drug.

The hoarding of essential drugs—and the resulting gray market—is another problem. Distributors of the drugs have inside information on when the supply may be drying up, allowing them lead time to stockpile a supply. Once the shortage is wide enough, they can sell the drug at up to 100 times the original price. Such price gouging was well documented during the cytarabine shortage. Because Medicare does not allow update of the ASP but every 6 months, doctors who bought the drug at high prices to save their patients’ lives took a bath.

Legislation proposed by U.S. Senators Amy Klobuchar (D-MN) and Bob Casey (D-PA) would mandate that manufacturers inform the FDA at least 6 months ahead of a potential shortage, but this could be a double-edged sword: It would allow the FDA to seek alternative sources, but would also alert distributors to start hoarding. This could be stopped with federal regulations making “scalping” of essential live-saving drugs in a black-market environment a criminal activity since it can cause the death of U.S. citizens.

The greatness of a civilized society is measured by how well it treats its weakest members—the sick and the poor. In a nation such as the United States, it is a shame and it is shameful that we condone such drug shortages, which are entirely preventable and which can make a difference between life and death. ■

On October 31, President Barack Obama issued an executive order instructing the FDA to broaden reporting of potential drug shortages, expedite reviews of applications to begin or modify production of these drugs, and provide more information to the Justice Department about possible cases of...