This fourth annual survey focuses on racial differences in perceptions about health-care inequities and concerns about missed cancer screenings due to COVID-19.

As in past years, the results from ASCO’s 2020 National Cancer Opinions Survey showed a startling dichotomy in the perceptions of Americans on a variety of health-care issues. As expected, the two major events this year, the COVID-19 pandemic and a national reckoning over racial injustice, dominated Americans’ concerns regarding their health care. The results from the survey of more than 4,000 adults, including 1,142 cancer survivors, were published in October 2020.1

“Although many patients recognize there is unequal access to care, they do not connect that to disparities in cancer outcome.”
— Richard L. Schilsky, MD, FACP, FACT, FASCO

The findings on inequities in health care show that a large majority of respondents, 59%, agreed that racism can impact the care a person receives in the U.S. health-care system, and more than half, 53%, believe that Black Americans are less likely to have access to the same quality of cancer care as their White peers. However, only about one-quarter agreed that a person’s race affects the likelihood that he or she will receive the best possible cancer care, and few respondents (less than one in five) believed race has an impact on a person’s likelihood of surviving cancer, despite mounting evidence to the contrary. According to the American Cancer Society, collectively, Black patients with cancer have the highest death rate and shortest survival of any racial/ethnic group in the United States for most cancers, and Black men also have the highest cancer incidence rate.2 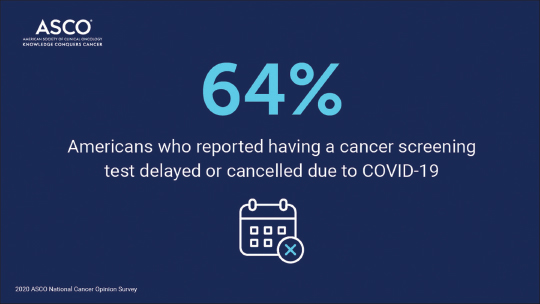 “We are seeing evidence of inequity in almost all aspects of cancer care,” said Richard L. Schilsky, MD, FACP, FACT, FASCO, Chief Medical Officer and Executive Vice President of ASCO. “What is clear is that these inequities and the resulting disparities in outcome are not related to biology. They are related to access to care; insurance coverage, which determines access to care; health-care literacy; and mistrust in the health-care system. Another contributing factor for many minority groups, particularly Black Americans, is the very small percentage of Black oncologists in the workforce. Many patients feel more comfortable seeing a doctor who looks like them, and we know there are very few Black oncologists. What the survey revealed is that, although many patients recognize there is unequal access to care, they do not connect that to disparities in cancer outcome. I’m not sure why that disconnect exists, but it was an interesting observation.”

Coping With the COVID-19 Pandemic

The additional hardship the coronavirus is having on Americans’ daily lives was also evident in the survey’s results, especially for patients with cancer. According to the findings, an overwhelming majority of surveyed patients, 81%, said they are limiting their contact with others over fear of contracting the coronavirus. In addition, approximately half said they are having to make a lot of sacrifices in their daily life because of their heightened risk for COVID-19.

“Obviously, patients with cancer face a lot of emotional and financial burdens because of the uncertainty of what their outcome will be, including the need to go to a facility to have their treatment administered, the management of treatment side effects, and, of course, it’s also becoming clear that patients with cancer are a vulnerable population for COVID-19 infection. When you layer all this on, it’s not surprising that these patients would be especially frightened about the risk of infection,” said Dr. Schilsky. “These patients are caught in a catch-22 in which they need to see their physicians because they have a serious underlying illness, they need support from their caregivers because they are receiving a complicated therapy that produces significant toxicity and disability, and yet they are not comfortable reaching out to get that support because they are concerned about the risk of exposure to the virus. It’s a very challenging time for patients with cancer.”

“What we don’t know is how frequently Black Americans get their cancer screenings during normal times,” explained Dr. Schilsky. “One of the health challenges we have in this country is that many people, even in the absence of the pandemic, do not get their recommended cancer screenings, so that’s the baseline. When you layer in the fear related to going to a facility for a test during the pandemic, it only makes the situation worse. But the good news is that health-care facilities are likely much safer now than they were in March and April, at the height of the pandemic, and, obviously, people need to get back on track with their cancer screenings.” 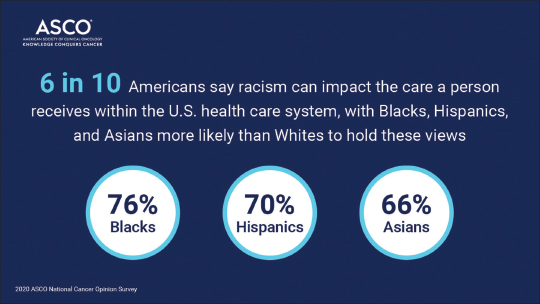 Adhering to timely recommended cancer screenings was not the only missed opportunity for cancer prevention in the survey’s findings. According to the survey results, fewer than half of Americans reported taking preventive actions to reduce their cancer risk, including using sunblock, 48%, maintaining a healthy weight, 47%, and limiting alcohol consumption, 42%.

In a positive change in cancer risk perception from previous ASCO National Cancer Opinions Surveys, 53% of respondents in this year’s survey agreed that using e-cigarettes was a cancer risk, up from 42% in the 2018 survey. A total of 34% of adults agreed that alcohol consumption increased cancer risk, up from 30% in the 2017 survey. However, when asked about what actual steps they are taking to reduce their cancer risk, 50%, said they are taking dietary supplements to reduce risk vs 44% who agreed with that statement in 2017 and 2018.

Among the most puzzling findings in ASCO’s National Cancer Opinions Survey is that, although 75% of respondents said they would be willing to participate in a cancer clinical trial if they had cancer, and nearly the same amount agreed that participating in a clinical trial is worth the risks for the benefit of the greater good, most had misunderstandings about the way trials are conducted and the safeguards in place for participants.

Most adults, 91%, said that clinical trials involve some risk, with about 21% believing there is a lot of risk.

Perhaps most troubling of all, nearly half of respondents, 48%, believe patients with cancer who participate in clinical trials are not receiving the best possible care and are just part of an experiment.

In addition, 75% of respondents, including 87% of patients with cancer, said that some participants in cancer clinical trials receive a placebo rather than actual treatment.

“I find these findings very disturbing, disappointing, and deflating because so many of us have been trying for so long to dispel some of these myths about cancer clinical trials. Obviously, we haven’t been very successful,” said Dr. Schilsky. “We’ve seen these kinds of statistics for a long time. It’s always interesting to see people say they would be willing to participate in a clinical trial if they had cancer, but that is a hypothetical circumstance. When people actually have cancer, they are much more reluctant to participate in studies.” 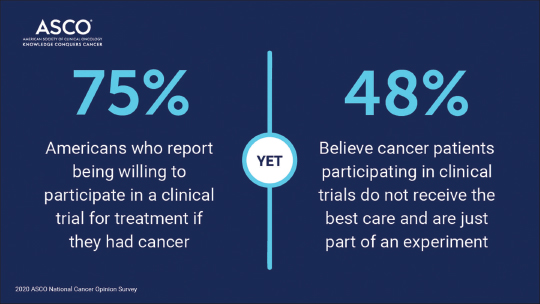 According to Dr. Schilsky, it’s incumbent upon organizations like ASCO and patient advocacy groups to continue to stress to patients that cancer clinical trials are an important option to be considered during any point in their cancer journey.

“We know that the biggest advances in cancer care have come from the application of new therapies early in the course of a patient’s illness, which is why adjuvant therapies are so effective,” said Dr. Schilsky. “These advances can only be achieved through clinical trials in which the patients, by design, are enrolled early in the course of their illness. Clinical trials are not a last resort. They are always an appropriate consideration. And, of course, placebos are rarely used in cancer clinical trials unless there is no known standard of care and the placebo is necessary to assure the scientific integrity of the study. Somehow these messages aren’t getting out. We have to work harder.”

Expanding the Role of Telemedicine

Although telemedicine became a valuable tool for patients with cancer during the COVID-19 pandemic, especially for those with rare cancers living far distances from cancer centers,3 only a small number of ASCO survey respondents took advantage of the service during this time. Just 17% reported having a telemedicine visit with their health-care provider instead of an in-person visit. However, according to Dr. Schilsky, in the future, telemedicine is likely to play a bigger role in cancer care delivery, even in a post-pandemic world.

“Telemedicine will continue to become a major component of all kinds of cancer care delivery, but we have to recognize its limitations.”
— Richard L. Schilsky, MD, FACP, FACT, FASCO

“Telemedicine will continue to become a major component of all kinds of cancer care delivery, but we have to recognize its limitations,” said Dr. Schilsky. “Speaking as a physician, its biggest limitation is not being able to physically examine a patient. But there are many patient encounters that don’t require a physical examination and where a good conversation is the key element of the visit. A key advantage of telemedicine is that it allows more people into the ‘exam room,’ family members and caregivers who may live far distances from the patient but who are concerned about the patient’s well-being, to participate in the patient’s care, and that’s a good thing. We just have to recognize the technology’s limitations and when it is appropriate to utilize telemedicine and when it is not.”

The ASCO 2020 National Cancer Opinions Survey was conducted online by The Harris Poll from July 21 through September 8, 2020, among 4,012 adults in the United States, aged 18 and older, including 1,142 adults who currently have or had cancer. The full survey findings are available at www.asco.org/sites/new-www.asco.org/files/content-files/2020-ASCO--National-Cancer-Opinions-Survey-All-Findings.pdf.

DISCLOSURE: Dr. Schilsky has received institutional research funding from AstraZeneca, Bayer, Boehringer Ingelheim, Bristol Myers Squibb, Genentech/Roche, Lilly, Merck, and Pfizer and has been reimbursed for travel, accommodations, or other expenses by Varian.