Cancer on the Global Stage: Incidence and Cancer-Related Mortality in Chile 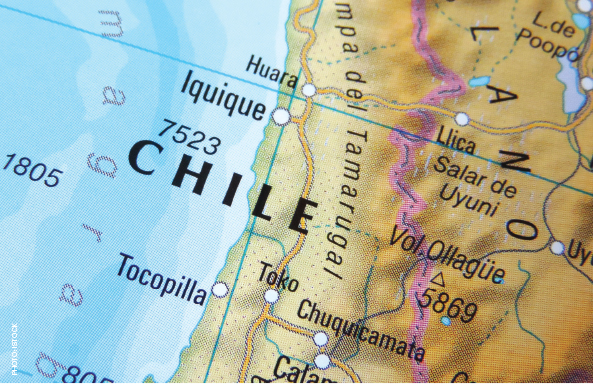 The country has experienced strong socioeconomic growth and important epidemiologic changes during the past 3 decades. Chile markedly reduced its level of poverty, from 40% in 1988 to around 10% in 2019. It has also achieved a high per-capita income of $25,155 USD (2019), which is the highest in Latin America.2

Approximately 20% of its gross national product is allocated to health care, of which about 1% is directed toward cancer care and treatment.3 Chile’s human development index of 0.847 (World Bank, 2015) is quite high, and it is ranked 42nd out of 189 countries and territories.3 Its public health indicators have reached high standards and are comparable to numbers reported from other high-income countries. Chile has a life expectancy of 79.4 years and an infant mortality rate of 6.2 per 1,000 live births.1

In spite of these achievements, social and health disparities remain a significant problem in Chile. Its Gini coefficient for income inequality—based on the comparison of cumulative proportions of the population against cumulative proportions of income—has experienced only a slight reduction over a 15-year period, from 54.8 in 1992 to 44.4 in 2017, placing Chile in the highest-inequality spot among the 37 countries that constitute the Organization for Economic Co-operation and Development (OECD).2

The burden of cancer in the Chilean population is large, with many health-related disparities affecting distribution of the cancer burden and the quality of cancer care. Cancer accounts for 23.4% of all deaths in the country and is responsible for the highest impact on quality of life, accounting for 15.5% of disability-adjusted life-years.4 The economic impact of cancer, as measured in disability-adjusted life-years, was estimated to be $3.5 billion USD in 2015.4

The burden-of-cancer profile in Chile has changed during the past decade. Chile has witnessed a significant reduction in cancer-related mortality, by 5.2% in women and 5.5% in men. This reduction over a 4-year period from 2015 to 2019 is greater than the reductions noted for other countries such as Brazil, Mexico, and Colombia.8

For the year 2018, there were 5,162 new cases of gastric cancer, making it the fourth most frequently diagnosed cancer by incidence in Chile.5 Gastric cancer also accounted for 3,478 deaths, making it the second most common cause of cancer-related mortality.5 In spite of its high prevalence, the incidence and mortality rates have declined by 30% in the past 2 decades.5,9

The majority of patients with gastric cancer in Chile are male, of indigenous origin, and reside in urban areas, with lower education qualifications. Infection with Helicobacter pylori, which is highly prevalent in Chile, and a salt-rich diet have been implicated in the etiology of gastric cancer. Nearly 16.8% of patients with gastric cancer (particularly in the proximal cardia) are noted to be infected with the Epstein-Barr virus. It is thought that the high incidence of H pylori infection, high-salt diet, and presence of Epstein-Barr virus in addition to genetic predisposition account for the high gastric cancer burden in Chile.10

Gallbladder cancer is more common in the southern regions of Chile, which has a higher proportion of indigenous Mapuche people.11 Gallbladder cancer is known to be associated with cholelithiasis, chronic infection with Salmonella Typhi, and obesity, all of which are highly prevalent in Chile. Genetic factors have been implicated in the higher incidence of lithogenesis as well. Mortality from gallbladder cancer is 49 times higher in women due to lower levels of education, delayed medical consultation, higher obesity rates, and a sedentary lifestyle.11

Based on epidemiologic and modeling analysis,12 prophylactic cholecystectomy for cholelithiasis was included in Chile’s national health universal access program (Garantías Explícitas en Salud [GES], or Explicit Guarantees in Health Care) in 2010, as a preventive measure to reduce the incidence of gallbladder cancer.13

The rise of colon cancer in Chile is a reflection of the Western lifestyle habits that Chile has progressively adopted. Adjusted mortality for both colon and rectum cancer shows an increasing trend between 2000 and 2016, from 5.91 to 7.19 per 100,000 inhabitants (colon) and 1.67 to 1.99 per 100,000 inhabitants (rectum).5 Colorectal cancer represents an emerging disease, and there is still no national screening program in place to face this burden.

Mortality rates for cervical cancer in Chile are higher than in some developed countries. There is an uneven socioeconomic distribution of the disease, with a higher burden noted in the lower socioeconomic strata.

Cervical cancer is the third most frequent cancer among Chilean women and is the second most frequently diagnosed cancer in women aged 15 to 44 years. It is estimated that nearly 10% of women in the general population are infected with human papillomavirus (HPV).14 In Chile, nearly 86.4% of all invasive cervical cancers are attributed to HPV.15 The implementation of the HPV vaccine program in 2014 is likely to reduce the cervical cancer burden in the country.

Although the adjusted mortality rate for the disease increased from 1960 to the mid-1980s, a decreasing trend by about 50% was seen between 1990 and 2016.5 This trend can be attributed, at least partially, to early diagnosis resulting from screening mammography and better availability of drugs such as tamoxifen. Both these interventions are included in the GES universal access program.

Several carcinogenic risk factors are still highly prevalent in Chile. The National Health Survey 201816 showed a high prevalence of many carcinogenic risk factors in the general population, such as smoking (33.4%, although that prevalence decreased from 40.6%, reported in 2010), lack of physical activity (85%), overweight (67%), prevalence of H pylori (70%), gallstone disease in women (37%). In addition, only a minority (15%) consume the required daily amount of fruits and vegetables. Specific gene mutations in high-risk groups, together with chronic inflammatory conditions, have also been associated with gallstone disease and gallbladder cancer in the Chilean population.

Cancer prevention strategies are promoted by the large, primary health-care Chilean network. Access to the primary health-care system is universal and free in Chile. This policy has been very successful in addressing childhood undernutrition, infectious diseases, and respiratory diseases. However, it has been less successful in implementing national programs for cancer prevention. 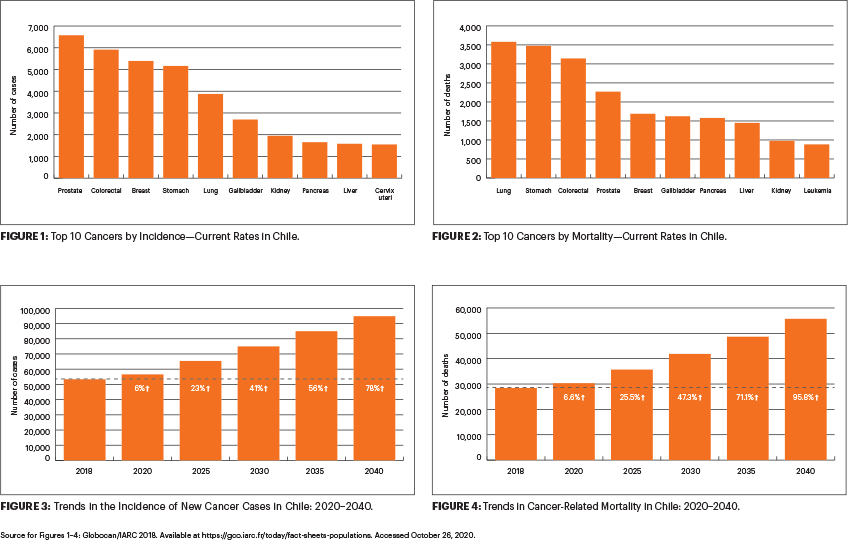 Cervical cancer screening through Pap smears reaches about 65% of the population, and many programs have been introduced to integrate HPV detection, especially in women who are not compliant with screening recommendations.15 HPV vaccination was added to the National Immunization Program in 2014.17

The breast cancer screening rate with mammography stands at 40%, despite the fact that there is no associated copayment.18 Implementing standardized screening programs at the community primary care level can achieve coverage of more than 90%.19 A gallbladder cancer detection program in primary care was initiated in Chile in 2006, based on evidence from epidemiologic and cost-effectiveness models and pilot programs.12,20 The strong emergence of colorectal cancer in the country highlights the need for developing a national program in primary care.

The health-care system in Chile is a hybrid of public coverage (serves 75% of the population), insurance-based health care (14%), and mixed insurance providers (11%). In this hybrid system, health care is provided by FONASA (Fondo Nacional de Salud, or National Health Fund), ISAPREs (Instituciones de Salud Previsional, or Pension Health Institutions), and other private health insurances. As a result of this hybrid system, some patients cannot access adequate care, either due to the presence of preexisting conditions or their inability to afford the copayments without ruinous financial consequences.21

In response to these significant inequities, a national health-care reform was implemented in 2005. Patients with certain cancers are now specifically included in the new national program encompassing the aforementioned GES as well as the CAEC (Cobertura Adicional para Enfermedades Catastróficas, or Additional Coverage for Catastrophic Illnesses). As a result, these patients can access care more promptly at a lower cost.22 Similarly, cancers included in the Ricarte Soto Law—(named for a well-known journalist who succumbed to lung cancer in 2013, after bringing much public attention to the issue of high medical treatment costs)—benefit from better cancer care due to the funds supported by this law toward financing prohibitively expensive treatments.23

Chile has established a National Cancer Plan (2018–2028), which is currently being gradually implemented.24 The need for health-care reform has been recognized, and recently, the National Law of Cancer was approved, with the aim of providing universal access to cancer care.25 For instance, breast cancer is included among the GES diseases, which has allowed a greater number of women to receive adequate radiologic and pathologic diagnosis, as well as adequate access to surgery, radiation, and systemic therapies, including trastuzumab and others. The importance of an integrated multidisciplinary approach cannot be overstressed, as it facilitates patient access to the cancer centers and shortens the time spent waiting between visits to multiple specialists.

Primary care is essential for the early detection and timely access to treatment for patients with cancer, and Chile has a strong primary health-care network. In addition to the traditional cervical and breast cancer programs, new pilot programs targeting gallbladder and gastric cancer have started at the Ancora UC university network and have been replicated by others.26

Chile does not currently have a National Registry of Cancer, although there are five population-based provincial registries. However, none of them operate in the Santiago Metropolitan Region, which constitutes nearly half of the country’s population. A National Pediatric Tumors registry also exists.4

The scarcity of reliable registries makes it nearly impossible to accurately design proper research studies to help address public policy. This makes it difficult to undertake short-term and long-term planning to address the cancer burden in Chile. Most of the national cancer data in Chile are derived primarily from death certificates.

Although Chile has witnessed significant socioeconomic development, there are significant disparities in health-care delivery, which affect cancer care. Cancer is a major contributor to the health burden in Chile, although improvements in survival for some cancers are being seen.

Several carcinogenic risk factors are highly prevalent in Chile. The existing cancer prevention/screening programs may be inadequate now but are undergoing beneficial changes to improve their efficacy and penetrance. The health-care reforms underway are having a positive impact on improving access to cancer care and hopefully will spur more integration between specialists and primary care teams.

There exists a major need for training an adequate number of health-care personnel and developing cancer registries to promote research, which will ultimately improve cancer care delivery. We hope that these changes and the continued efforts of many advocates will help address the cancer burden in Chile for all patients, providing timely care, regardless of demographics or socioeconomic status.

DISCLOSURE: Dr. León, Dr. Puschel, Ms. Craig, andDr. León G-Hreported no conflicts of interest. Dr. Are is a board member with Global Laparoscopy Solutions Inc; has received research funding from Pfizer; and has a patent with the University of Nebraska Medical Center for a laparoscopy instrument.