It is with great sadness that we report Craig Alguire, MD, 42, died on October 11, 2019, at his home in Grand Rapids, Michigan. Diagnosed with grade 4 glioblastoma multiforme in 2015, Dr. Alguire chronicled the effects the cancer was having on his life in his Patient’s Corner column, published in the June 10, 2019, issue of The ASCO Post. As is clear in his column, despite the mounting physical and emotional challenges he was facing, Dr. Alguire’s sense of humor, humanity, and generosity remained intact. The lessons Dr. Alguire imparted in his column, including finding courage in the face of adversity, joy in everyday life, and acceptance of his terminal illness, are worth repeating. Here is republication of “As My Outside World Became Smaller, My Family Focus Became Larger,” by Craig Alguire, MD. 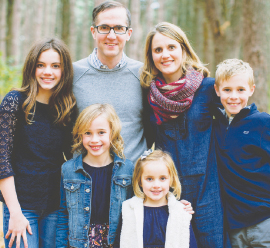 As I write this, I think I’m making sense but am not 100% sure. My brain is a little scrambled after nearly 4 years of treatment for grade 4 glioblastoma multiforme, but I think the essence of my humor and humanity is still intact.

When I experienced my first partial seizure while riding my exercise bike in the early morning hours of October 29, 2015, which left me unable to speak for about 20 seconds, I did what many young, healthy people would do. I dismissed the incident as an anomaly, some innocent brain-function hiccup, and went to work in my cardiology practice. But when I had another partial seizure later that morning while examining a patient, I could no longer deny something serious was happening.

My medical partner gave me four baby aspirin in case I was having a stroke, and I went to the closest hospital emergency room, where a head computed tomography scan found a golf ball–sized mass on the left side of my brain. Although most of the medical staff at the hospital tiptoed around a possible diagnosis, the neurosurgeon I met with declared with certainty, “This is cancer.” And just like that, the doctor became the patient.

Adjusting to a Smaller World

I soon underwent the first of three craniectomies, cranial irradiation, and daily doses of temozolomide; then I entered a clinical trial investigating the anti–programmed cell death protein 1 immunotherapy pembrolizumab for the treatment of glioblastoma. Despite the treatments, the cancer has progressed, and bevacizumab is now included in the treatment mixture.

Although I was able to resume my cardiology practice on a part-time basis for a while after my diagnosis, the cumulative effects of the cancer and its treatments, including word-finding difficulty—I could barely talk in the fall of 2018—limited the use of my right arm. And ongoing seizures convinced me to give up my medical practice altogether. I thought it wouldn’t be fair—or reassuring—to my patients to see me stumbling over my words and fumbling through their examination. I’ve also given up driving, riding my mountain bike, and competing in triathlons.

My outside world has gotten smaller, and my focus now is on the most important aspect of my life—my family—my wife, Staci, and our four wonderful children, Allison, 14; Connor, 11; Ella, 9; and Mia, 5. They are the reason I get up in the morning. And I’m grateful for the love and support of my parents, Mary and Tom (my father is still practicing medicine at age 76 and is my go-to internist) and my sisters, Amy Ackerman, and Katie Alguire, MD (who is my go-to oncologist). They have gotten me through very difficult times, and I can’t adequately express my deep appreciation for all they have given me.

Coping With the Entirety of a Cancer Diagnosis

Over the past few weeks, despite no apparent progression of my tumor, my partial seizures have become more frequent, and I think I’m dying. It’s terrifying, but in between the seizures, I feel great and am grateful for every day I’m still alive. But I’m greedy; I want more days.

When I start to go into a seizure, of all my children, Connor, seems the most interested in the process; he plays games with me until the seizure passes. He doesn’t seem frightened by these episodes, and his reaction is comforting to me, because he normalizes the event.

The good news about my illness is that I get to spend more time with my family, playing games with the kids, and attending their sporting events, and going on date nights with Staci. Although this intense closeness has made for some occasional awkward moments, it has also improved our family dynamic and made us stronger.

Lesson for the Living and the Dying

In addition to my family, I’m grateful to my fantastic medical team for their high-quality and compassionate care. I expected my oncologists to be smart and competent, but their level of empathy is icing on the cake. From the time of the diagnosis, my neurosurgeon and neuro-oncologist saw me first as a person and then as a patient. If I have to get bad news, I’d rather get it from someone who genuinely cares about me.

The first 2 days of my diagnosis were the two biggest medical events I’ve had since I learned I have cancer. The day of my diagnosis, I was completely shocked, terrified, and already missing the life I had known prior to the diagnosis. After meeting with my neurosurgeon the following day, I was comforted by the fact that he had a plan on how best to treat the glioblastoma. Once you have a plan in place, half the worry is gone.

Each day since my diagnosis has been a gift, and I appreciate every one. I don’t know how many days I have left, but I won’t waste one minute of them. It’s an important lesson for both the living and the dying. ■

Dr. Alguire, 42, lives with his wife, Staci, and their four children, Allison, Connor, Ella, and Mia, in Grand Rapids, Michigan.