The text and photographs on this page are excerpted from a four-volume series of books titled Oncology: Tumors & Treatment, A Photographic History, by Stanley B. Burns, MD, FACS, and Elizabeth A. Burns. The photo below is from the volume titled “The Antiseptic Era: 1876–1900.” The photograph appears courtesy of Stanley B. Burns, MD, and The Burns Archive. To view additional photos from this series of books, visit burnsarchive.com. 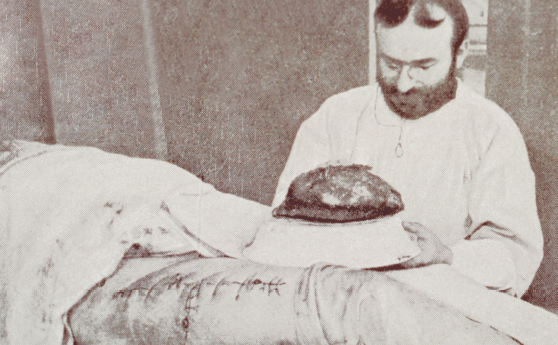 Antiseptic and aseptic surgical techniques gave surgeons the ability to extirpate tumors with confidence. Although their operative abilities were at times questionable, the lack of fear that their patients would contract an infection helped create a generation of surgical innovators. In 1887, Arpad Gerster, MD, a surgeon at New York’s Mount Sinai Hospital and the German Hospital (renamed Lenox Hill during World War I), reported success in the removal of a sarcoma, which he documented with this amazing photograph.

Henry Rickriegel, carpenter, aged 23, was admitted to German Hospital on March 2, 1887. Two days later, the house surgeon extirpated a mass of suppurating glands from Scarpa’s triangle on the right side. The saphenous vein, which passed into the tumor from below, was tied and cut across. Likewise were treated a number of larger veins entering the tumor from above. The femoral vessels were not exposed, but the pulsation of the artery could be distinctly felt and was carefully held aside. Finally, the mass was freed all around, until a stout pedicle was formed, which was seen entering the oval foramen of the fascia lata. This pedicle was tied with catgut and was cut through.

In the meantime, the patient had become semiconscious and began to struggle, where upon, suddenly, an enormous jet of venous blood was seen to well up from the bottom of the wound. The operator plunged his fist into the pool of blood and thus succeeded in checking the hemorrhage until Dr. Bachmann, the Chief of the House Staff, appeared; he luckily succeeded, with the aid of Thiersch’s spindles, in passing two ligatures, one below and the other above the bleeding point, effectually stopping the formidable loss of blood. Immediately, deep cyanosis and edema of the lower extremity developed, and the author, who saw the patient directly after the operation, ordered elevation of the limb, which was brought about by its vertical suspension in a wire cradle.

March 5: Cyanosis disappeared, edema much diminished. Temperature: 101.5ºF. Circulation of the limb good. The wound did well, but, on March 18, temperature rose to 103, and signs of phlebitis of the femoral vein in the middle of the thigh appeared in the shape of a cylindrical, painful, and hard infiltration. This and a number of similar attacks were subdued by the application of an ice bag. The persistent edema was combated by elastic compression with Martin’s bandage supplemented later on by massage. May 15: The patient was discharged cured, very little of the edema being noticeable. ■