Survival and Bevacizumab in Early Breast Cancer: Time to Reconsider? 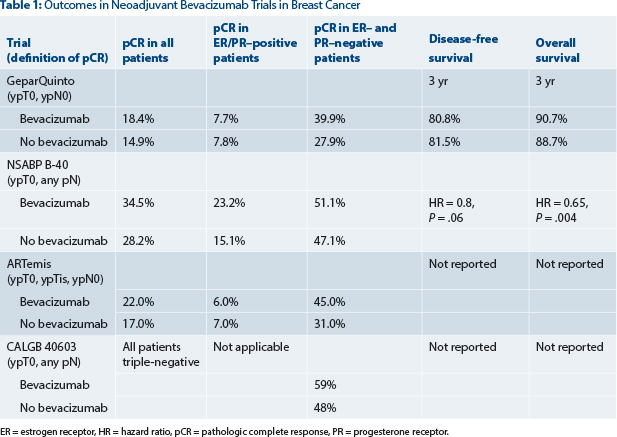 [S]o far, there is still no role for bevacizumab in the adjuvant or neoadjuvant setting in patients with HER2-negative breast cancer outside of clinical trials.

In metastatic HER2-negative breast cancer, several trials have shown that the addition of the anti–vascular endothelial growth factor (VEGF) monoclonal antibody bevacizumab (Avastin) to different chemotherapy regimens significantly improved response rates and progression-free survival by various magnitudes compared to chemotherapy alone.1 Even though these trials failed to show an increase in overall survival with the addition of bevacizumab in metastatic disease, there has been considerable interest in evaluating bevacizumab in both the neoadjuvant and adjuvant settings.

The common observation in all four trials (GeparQuinto, National Surgical Adjuvant Breast and Bowel Project [NSABP] B-40, ARTemis, and Cancer and Leukemia Group B [CALGB] 40603) was that the pathologic complete response rate could be modestly but significantly increased with the addition of bevacizumab to anthracycline/taxane–based chemotherapy, with statistical significance being reached probably due to the high numbers of enrolled patients. Until now, survival outcome data were only available for the GeparQuinto trial, which showed no significant improvement in disease-free survival or overall survival with the addition of neoadjuvant bevacizumab among all patients or those with triple-negative disease.6

In contrast to the GeparQuinto study and the two big adjuvant trials, the recently published secondary outcome data of the neoadjuvant NSABP B-40 trial surprisingly reported a significant increase in overall survival (hazard ratio [HR] = 0.65, 95% confidence interval [CI] = 0.49–0.88, P = .004) with the addition of neoadjuvant plus adjuvant bevacizumab, with some evidence of greater benefit in hormone receptor–positive disease.9 The trial, reported by Bear and colleagues in the Lancet Oncology, is summarized in this issue of The ASCO Post.

Since bevacizumab is a targeted antiangiogenic agent, it is potentially less likely to eradicate micrometastatic disease—eg, in the bone marrow—whereas a manifest tumor in the breast, which is angiogenesis-dependent, may be more effectively treated by additional antiangiogenic therapy. This activity is reflected by the increased pathologic complete response rate with the use of bevacizumab in all neoadjuvant trials. Once the relatively short neoadjuvant treatment is completed, there might be a rebound of tumor cell growth.

Thus, continuous bevacizumab treatment after surgery might be a better strategy to prevent this phenomenon. However, the negative results of the adjuvant trials do not fully support this hypothesis. If the effect of bevacizumab in terms of overall survival in the NSABP B-40 is real, we may speculate that it is the combination of neoadjuvant and adjuvant application that is achieving this outcome.

Further differences among trials are that all trials used different chemotherapy backbones and that both the NSABP B-40 and CALGB 40603 trials had factorial designs in which modifications of the chemotherapy regimens were tested in parallel with the addition of bevacizumab. In the GeparQuinto trial, patients with no clinical response after the first four cycles of epirubicin and cyclophosphamide were removed from the study, potentially introducing bias. Moreover, the cutoff point for estrogen receptor–positive disease was different in the various trials. In addition, there are some major caveats in the interpretation of the NSABP B-40 trial. The endpoints of distant disease-free survival and overall survival were not prespecified, and thus there were no preplanned statistical calculations for these outcomes.

Further, disease-free survival was not significantly different in the B-40 trial between the bevacizumab and no-bevacizumab group (HR = 0.80, 95% CI = 0.63–1.01, P = .06). Since in almost all adjuvant trials, an improvement in overall survival is accompanied by an improvement in disease-free survival, this observation in the B-40 trial is difficult to explain.

The so far contradictory or overall negative results of bevacizumab trials may come as a disappointment for many. Trials that investigate targeting drugs in populations without identified targets have been a large part of clinical research in the past 2 decades and have proven to be unsuccessful in most cases. Meta-analysis of such trials can identify the effects of bevacizumab in similar subgroups of the patient populations in the above-mentioned studies, but the heterogeneity of other patient characteristics, treatment regimens, and treatment durations in these trials will limit the validity and value of the findings.

Neoadjuvant trials offer a unique opportunity to investigate activity of different treatment regimens and, in conjunction, to harvest pre- and post-treatment tumor samples and to collect liquid biopsy samples. Translational studies allow us to look for predictors of efficacy (eg, with bevacizumab) and to gain further insight into the molecular mechanisms of action and resistance. Predictors of efficacy of bevacizumab identified in translational studies may foster new trials of this drug in defined subgroups. However, so far, there is still no role for bevacizumab in the adjuvant or neoadjuvant setting in patients with HER2-negative breast cancer outside of clinical trials.  ■