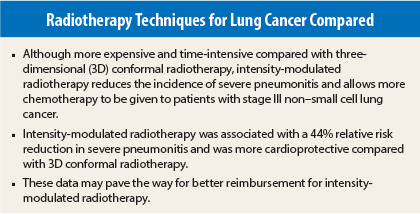 These findings may fundamentally change the way we deliver radiation therapy for locally advanced lung cancer.

These findings of a secondary analysis of the large randomized NRG Oncology/RTOG 0617 trial, presented at the 2015 American Society for Radiation Oncology (ASTRO) Annual Meeting in San Antonio, Texas, suggest that intensity-modulated radiotherapy should gain a larger role in the treatment of stage III lung cancer.1

“Cost of hospitalizations for these toxicities is high. If you factor in an absolute 4.5% reduction in grade 3 or higher pneumonitis and multiply that by 70,000 patients per year with stage III NSCLC, the cost savings [with intensity-modulated radiotherapy] could run into billions of dollars,” Dr. Chun told The ASCO Post.

NRG Oncology/RTOG 0617 was a large, multi-institutional phase III randomized clinical trial conducted from 2007 to 2011 in patients with locally advanced NSCLC. The original study compared a high dose of radiation (74 Gy) to a standard dose (60 Gy). Patients received concurrent chemotherapy with carboplatin/paclitaxel with or without cetuximab (Erbitux).

Although the low-dose bath with intensity-modulated radiotherapy was a concern originally, it was not associated with severe pneumonitis or any other severe toxicity, Dr. Chun pointed out.

“We looked at one of the largest clinical trials ever done for NSCLC and found that the most important predictors of severe pneumonitis were intensity-modulated radiotherapy technique and lung V20 [the percentage of lung volume (subtracting the volume involved by lung cancer) that receives radiation doses of 20 Gy or more]. The low-dose bath created by intensity-modulated radiotherapy was not associated with any survival or toxicity outcome. These findings may fundamentally change the way we deliver radiation therapy for locally advanced lung cancer,” Dr. Chun stated.   ■

At a press conference held during the ASTRO Annual Meeting, ASTRO President-Elect Brian D.
Kavanagh, MD, MPH, FASTRO, interim Chair of Radiation Oncology at the University of Colorado, Anschutz Medical Campus, Denver, said, “This study provides an important lesson for the field. We are lucky to...