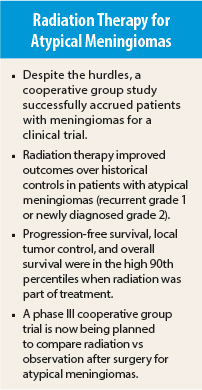 The study is notable because it is the first completed cooperative group meningioma trial. It is very difficult to run trials on meningiomas, so there has been trepidation about whether we could make a study work. After 15 years, this study has come to fruition.

Management of the vast majority of meningiomas is straightforward, but treatment of atypical meningiomas has been controversial. Should radiation be part of therapy or not has been the question. The first analysis of Radiation Therapy Oncology Group (RTOG) 0539 suggested that patients will have improved outcomes with the addition of radiation therapy to surgery.1

Results of the trial showed that patients with atypical meningiomas treated with radiation had a 3-year progression-free survival of 96%, the 3-year local control rate was 98%, and 3-year survival was 96%. The treatment was safe and well tolerated.

“The study is notable because it is the first completed cooperative group meningioma trial. It is very difficult to run trials on meningiomas, so there has been trepidation about whether we could make a study work. After 15 years, this study has come to fruition. It gives us [in NRG Oncology/RTOG] clinical direction for the future and proves that we can accrue patients to a trial.”

Dr. Rogers presented results for group 2 only (56 patients, 52 evaluable). About 70% were grade 2 with surgery and about 30% were recurrent grade 1. About 85% were treated with intensity-modulated radiotherapy, and 15% received three-dimensional conformal radiotherapy. He said that there was initial skepticism about grouping together recurrent grade 1 and newly diagnosed grade 2 meningiomas, but the results were the same in both subgroups.

The treatment was safe and well tolerated. Side effects were limited to grades 1 and 2, added Dr. Rogers. No grade 3 events were reported. Among 44 patients treated with intensity-modulated radiotherapy, 4 (9%) developed grade 2 acute adverse events, and 11 (25%) developed grade 2 late events.

After 3 years, two additional recurrences have been reported. Both patients have been treated and are alive, Dr. Rogers added.

To put these findings into context, Dr. Rogers showed a slide summarizing the historical trials that used surgery alone or surgery plus external-beam radiotherapy to treat atypical meningiomas. Compared with historical controls, 3-year progression-free survival appears approximately 20% to 30% higher when radiation was part of therapy.

“Radiation is used less commonly because of concerns about safety,” Dr. Rogers commented.

Based on the successful accrual and promising results of the phase II trial in atypical meningiomas, NRG Oncology/RTOG is planning a randomized phase III trial in patients with newly diagnosed atypical meningiomas. After gross total resection, patients will be randomized to observation vs radiation therapy with intensity-modulated radiotherapy or proton-beam therapy.   ■

Anita Mahajan, MD, a radiation oncologist at the University of Texas MD Anderson Cancer Center, Houston, moderated the press conference where these findings were discussed.

“Use of radiation for atypical meningiomas has been controversial. It has been difficult to put a study together, because we...