Cancer on the Global Stage: Incidence and Cancer‑Related Mortality in Algeria 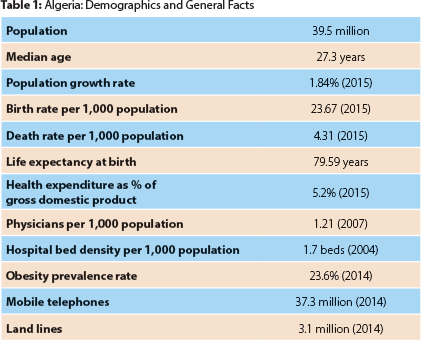 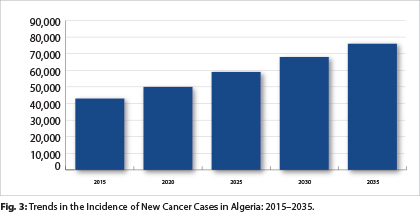 The ASCO Post is pleased to continue this special focus on the worldwide cancer burden. In this issue, we feature a close look at the cancer incidence and mortality rates in Algeria. The aim of this special feature is to highlight the global cancer burden for various countries of the world. For the convenience of the reader, each installment will focus on one country from one of the six regions of the world as defined by the World Health Organization (ie, Africa, the Americas, South-East Asia, Europe, Eastern Mediterranean, and Western Pacific). Each section will focus on the general aspects of the country followed by the current and predicted rates of incidence and cancer-related mortality. It is hoped that through these issues, we can increase awareness and shift public policy and funds toward proactively addressing this lethal disease on the global stage.

Algeria, a country of more than 39 million inhabitants, with a median age of 27 years, currently experiences a cancer incidence of more than 40,000 cases per year and a cancer mortality rate of approximately 25,000 per year (Table 1, Figs. 1 to 4). Like the worldwide rates of incidence of new cancer cases and cancer-related mortality, in Algeria rates of new cancer cases and mortality are predicted to increase significantly between 2015 and 2035 to approximately 75,000 and 46,000 per year, respectively. Cancer accounts for 10% of all deaths in Algeria. Although this is lower than that for cardiovascular diseases now (41% in 2014), the trends in age-standardized death rates have been gradually increasing for cancer.

Most cancers in Algeria present in late stages, making curative-intent treatment difficult. Algeria is the largest country in Africa with some sparsely populated areas. Due to this geographic predicament, providing timely and comprehensive cancer care to all regions of the country can be difficult. It has been noted that sometimes patients have to wait for long periods to receive radiotherapy. Nonetheless, several efforts are underway to improve cancer care.

One example of such efforts is the existence of several cancer registries that are procuring data, which will be beneficial. A recent publication of Cherif et al by using the Setif Cancer Registry documented a statistically significant increase in overall cancer incidence for both men and women (annual percentage increase of +2.5% and +3.7% respectively, P < .005). In addition, the recently proposed National Cancer Plan, with its eight main goals and the approval of the President of the Republic, Abdelaziz Bouteflika, has put the spotlight on cancer. It is hoped these efforts will go a long way in tackling the rising cancer burden in Algeria.  ■