A Cancer Diagnosis Can Lead to Significant Loss of Working Hours, Income 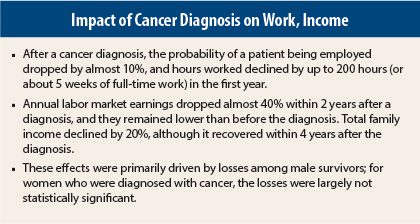 A new analysis indicates that when American adults are diagnosed with cancer, they experience significant decreases in the probability of working, in the number of hours they work, and correspondingly, in their incomes. Such negative impacts of a cancer diagnosis are particularly pronounced among working-age men. Published by Zajacova et al, the study illustrates some of the financial challenges that accompany a cancer diagnosis and highlights the need for efforts to mitigate the economic hardships associated with cancer.1

While studies have analyzed what happens economically to adults who are diagnosed with cancer, they have tended to be small, retrospective, subjective, and not representative of large populations. To address these shortcomings, Anna Zajacova, PhD, of the University of Wyoming in Laramie, and her colleagues analyzed data from 1999 to 2009 from the Panel Study of Income Dynamics, a nationally representative, prospective population-based observational study with individual and family level economic information. The researchers used models to estimate the impact of cancer on employment, hours worked, individual income, and total family income.

After a cancer diagnosis, the probability of a patient being employed dropped by almost 10%, and hours worked declined by up to 200 hours (or about 5 weeks of full-time work) in the first year. Annual labor market earnings dropped almost 40% within 2 years after a diagnosis, and they remained lower than before the diagnosis. Total family income declined by 20%, although it recovered within 4 years after the diagnosis. These effects were primarily driven by losses among male survivors; for women who were diagnosed with cancer, the losses were largely not statistically significant.

“Fifteen million American adults are cancer survivors, and American families need economic support while they are dealing with the rigors of cancer treatment,” said Dr. Zajacova. “Our paper suggests that families where an adult—especially a working-age male—is diagnosed with cancer suffer short-term and long-term declines in their economic well-being. We need to improve workplace and insurance safety nets so families can focus on dealing with the cancer treatment, rather than deal with the financial and employment fallout.”  ■