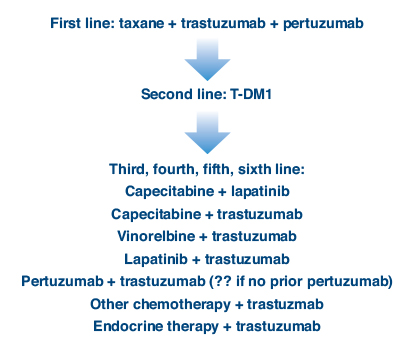 The good news about HER2-positive breast cancer is that recurrent disease is plummeting, owing to the impact of adjuvant trastuzumab [Herceptin]. Hopefully, first-line metastatic treatment is becoming a thing of the past,” said Harold Burstein, MD, PhD, of Dana-Farber Cancer Institute, Boston.

Meanwhile, however, clinicians still need to understand the optimal treatment of HER2-positive metastatic breast cancer, a topic that was addressed by Dr. Burstein and Eric P. Winer, MD, at the 2013 Breast Cancer Symposium in San Francisco.1,2

Dr. Burstein noted that the pivotal trials of trastuzmab for recurrent disease, which showed a 50% reduction in risk, probably underestimated its benefit. The typical Dana-Farber patient is maintained on first-line therapy for close to 9 months, Dr. Burstein said, adding, “This is one of the rare instances in oncology where real-world experience may be superior to clinical trial results.”

Trastuzumab maintains remission longer than do the appropriate agents for other subtypes of breast cancer, and virtually renders the risk of recurrence to zero in subcentimeter tumors, he said. But the use of trastuzumab in the adjuvant setting does impact its efficacy in recurrent disease, as median progression-free survival is significantly shorter when patients have previously received the drug. Resistance to trastuzumab, therefore, accentuates the need for new anti-HER2 therapies, he said.

These studies identified no new toxicity signals and limited clinical impact of “synergy” in laboratory models. Rather than further evaluating chemotherapy/trastuzumab combinations, research should focus on biomarkers and optimization of targeted therapies, he suggested.

Two new antibody products will further enhance anti-HER2 treatment in metastatic patients. In the first-line setting, (Kadcyla, previously known as T-DM1) reduced the risk of progression by 41%, compared to trastuzumab/docetaxel.3 Perhaps more critically, ado-trastuzumab emtansine improved quality of life and reduced symptoms, important outcomes that have been underrecognized, Dr. Burstein said. Currently, the drug is approved for refractory disease, but its use earlier in recurrence is anticipated.

Similarly, first-line treatment with pertuzumab (Perjeta) plus docetaxel, vs docetaxel alone, significantly delayed progression over trastuzumab/docetaxel in the CLEOPATRA trial,4 leading to U.S. Food and Drug Administration (FDA) approval for this combination (or pertuzumab with paclitaxel) in the first-line setting.

In patients who are both HER2-positive and estrogen receptor–positive, the benefit of pairing trastuzumab with endocrine therapy is there, but it is modest, he said. “Collectively, there is a suggestion that you can get a little bit more from endocrine therapy by adding the anti-HER2 drug, but most people don’t see a major clinical impact,” he said.

This was shown in several studies, including TAnDEM, which evaluated anastrozole with and without trastuzumab5; in the study of letrozole plus lapatinib (Tykerb), which led to FDA approval of this combination6; and in Cancer and Leukemia Group B (CALGB) 40302, which actually found no statistically significant benefit to adding lapatinib to fulvestrant (Faslodex).7 The findings support the theme that HER2-expressing tumors are somewhat resistant to endocrine-based therapies, though a substantial fraction of patients can benefit from these combinations, he said.

Discussing the treatment of metastatic patients beyond the first line, Dr. Winer said, “The single most important lesson we learned years ago about treating refractory or resistant HER2-positive breast cancer is that anti-HER2 agents continue to work even after progression on trastzumab.” Geyer et al showed this in 2006 by combining lapatinib and capecitabine,8 and Von Minckwitz et al followed in 2009 by demonstrating the value of capecitabine plus trastuzumab.9

Blackwell et al then showed that dual targeting of the HER2 receptor with two biologics, trastuzumab plus lapatinib, could delay progression (with a trend toward a survival benefit) vs lapatinib alone; 28% of refractory patients remained free of progression at 6 months.10 Less is known about the new anti-HER2 agent pertuzumab, but in a small study, the combination of pertuzumab plus trastuzumab in refractory disease yielded a 24% response rate, and an additional 26% of patients were stable at 6 months.11,12 He cautioned that this was a small, nonrandomized study.

“These two studies point out,” Dr. Winer said, “that combined targeted therapy can potentially be very effective, and this lesson has played out in the neoadjuvant setting as well…. Dual targeting with trastuzumab/lapatinib or trastuzumab/pertuzumab is a promising approach and may play a role in the refractory metastatic setting.”

With pertuzumab now indicated for first-line treatment, its place in treating refractory disease is less clear. “I suspect this will mean there is less of a role for all biologic combinations in the refractory setting,” he predicted.

“To some degree, everything changed with the development of [ado-trastuzumab emtansine],” Dr. Winer said. The binding site of the drug (the extracellular domain of HER2) is the same as for trastuzumab, because the drug is trastuzumab packaged as an antibody drug conjugate that delivers high concentrations of the drug to the tumor, sparing surrounding tissues. In the EMILIA trial, median progression-free survival was 9.6 months with ado-trastuzumab emtansine vs 6.4 months with lapatinib/capecitabine (P < .0001) and median overall survival was 30.9 months vs 25.1 months, respectively (P < .001).13

The additional benefit was observed without an increase in toxicity, especially serious adverse events. “For the most part, [ado-trastuzumab emtansine] is an agent that tends to be remarkably well tolerated,” he noted.

Having two new agents has altered the treatment paradigm for refractory HER2-positive disease. Dr. Winer described his preferred approach (Fig. 1). He explained that he selects a taxane plus tratuzumab and pertuzumab in the first-line setting and ado-trastuzumab emtansine in the second-line setting, though depending upon the results of the MARIANNE trial the option of ado-trastuzumab emtansine alone could change, he said. In the third line and beyond, there are more than a half-dozen effective combinations, and the order in which they are best given remains unclear.

“Perhaps we should start with pertuzumab and trastuzumab if the patient has not previously received this combination, and if insurance will pay for it,” he suggested. “There are still clinical trials, because we have by no means answered all the questions.” ■