'Master Protocol' Could Revolutionalize Trials in  Lung Cancer, and Eventually Other Cancers 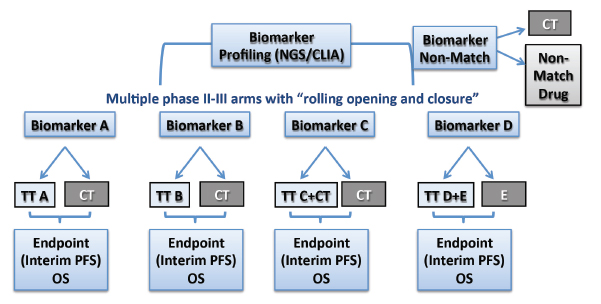 Cancer advocates and clinical trialists, for some time, have been proposing a radical change to the laborious drug development process—that industry, academia, funding sources, and other stakeholders actually pool their brain power and financial means and work together, not separately, to develop effective drugs for the ever-growing number of molecular targets. That is about to happen in the lung cancer community.

The ambitious “Master Protocol” is a collaboration among the lung cancer research community, the National Cancer Institute, the Foundation of the National Institutes of Health, the Food and Drug Administration (FDA), Friends of Cancer Research, and industry. It will be a test of a unique and modern pivotal trial design that could dramatically accelerate the targeted therapy revolution. At this time, it is limited to refractory squamous cell carcinoma of the lung, but if successful, the project could become a model for streamlined trials in other tumors.

Slated to launch early next year, the Master Protocol is expected to hasten, refine, and enhance clinical trial enrollment, reduce the cost of drug development, and ultimately—by determining the best therapeutic fit for patients—improve treatment outcomes.

It could be anticipated that, in a race to bring competing drugs to market, pharmaceutical companies would fear loss of autonomy and balk at sharing a database. But the early indication is that industry sees the value in collaborating, and several industry giants have seats on the Oversight Committee.

Roy S. Herbst, MD, PhD, who chairs the Master Protocol’s Steering Committee, described the project in an interview with The ASCO Post. Dr. Herbst is the Ensign Professor of Medicine, Chief of Medical Oncology, Director of the Thoracic Oncology Research Program, and Associate Director of Translational Research at Yale Cancer Center.

“The Master Protocol is a public/private partnership that pulls together a protocol where patients are genotypically selected, then sorted into one of multiple arms of a clinical trial,” he said. “As a practicing oncologist, I can tell you that if you have a patient with a mutation that occurs in 5% or perhaps less of the lung cancer population, it’s very hard to get that patient on a clinical trial, and these patients are often very sick and don’t have much time. We want to accelerate that process, and the Master Protocol is expected to do that.”

In the era of biomarker-driven trials, there has been a need for innovative trial design to account for interpatient tumor heterogeneity and genomic complexity. Squamous cell carcinoma is a perfect test drive, as it constitutes about one-quarter of all lung cancer diagnoses but has few good treatment options beyond surgery. The trial organizers have identified almost two dozen compounds in the pipeline, targeting 16 different molecular abnormalities.

The schema evolved from two phase II adaptive screening trials: ­BATTLE-1 and -2 (Biomarker-Integrated Approaches of Targeted Therapy for Lung Cancer Elimination), four-arm trials in patients with refractory non–small cell lung cancer using markers to guide adaptive randomization; and I-SPY2 (Investigation of Serial Studies to Predict Your Therapeutic Response With Imaging and Molecular Analysis), a neoadjuvant trial in breast cancer testing multiple novel drugs and biomarkers over a 5-year time frame. However, the Master Protocol differs from both of these in that patients are assigned to a study arm on the basis of their molecular profile, and it is a phase III investigation.

The major difference between the new project and these is that the explicit goal of the Master Protocol is drug registration—not simply identifying promising targets and drugs. “The trial would be designed with the ultimate goal of FDA approval for those drugs that meet prespecified criteria,” according to Friends of Cancer Research.

Participants in the project will include the entire North American Lung Intergroup, with some 500 sites in the United States and Canada, which will screen up to 1,000 patients per year. Patients with previously treated advanced squamous cell carcinoma will be randomized into each treatment arm on the basis of their molecular profile as determined by next-generation sequencing and immunohistochemistry (Fig. 1). The primary endpoint will be progression-free survival in the phase II component and overall survival in phase III. The trial will be led through SWOG working closely with ­Vassiliki ­Papadimitrakopoulou, MD, as the Principal Investigator and David ­Gandara, MD, the Lung Committee Chair.

All candidate drugs will have shown biologic activity against a measurable target (Table 1). Combinations of agents can be used, as appropriate. The goal is to develop each molecule with a companion diagnostic.

Having multiple arms in the Master Protocol will improve operational efficiency by providing homogeneous patient populations and consistency in eligibility, a trial infrastructure that will facilitate faster initiation of new trials, and a phase II/III design that allows rapid drug and biomarker testing for the detection of “large effects,” Dr. Herbst said.

“By grouping multiple studies, we can reduce the overall screen failure rate, and multitarget screening by broad-based platforms will provide a sufficient ‘hit rate,’ which allows for uninterrupted accrual,” he said. “With four to six arms open simultaneously, we anticipate a hit rate of about 70% in matching a patient with a drug/biomarker arm.” Dr. Herbst emphasized the modular nature of this protocol, where an arm could be dropped or a new one added based on evolving results.

According to Friends of Cancer Research, the study “represents a new opportunity for patients in a setting where few clinical trials may be available or accessible, especially for those patients with very rare mutations.” The nonprofit advocacy group predicts it will be seen as a significant landmark in personalized medicine. ■