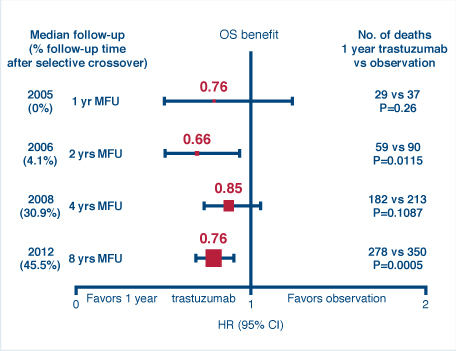 For HER2-positive early breast cancer, 1 year of treatment with trastuzumab (Herceptin)—rather than 6 months or 2 years—remains the standard of care, based on two pivotal studies presented at the 2012 European Society for Medical Oncology (ESMO) Congress.

The optimal duration of anti-HER2 adjuvant therapy has always been unclear. While the new studies do not put all questions to rest—more studies of trastuzumab duration are underway—they are clinically meaningful for clinicians.

The PHARE trial randomly assigned 3,384 patients receiving adjuvant trastuzumab to continue treatment for a total of 12 months, or to discontinue treatment at 6 months.1 The study was designed to test noninferiority of the shorter regimen.

“The results were inconclusive for the noninferiority analysis, and there was a trend favoring the standard 12 months of treatment,” he said at the Presidential Symposium.

Subgroup analyses are ongoing, and these might identify women who can be effectively treated with the shorter regimen. These findings will be presented at the 2012 San Antonio Breast Cancer Symposium.

The 8-year update of the HERA trial showed a sustained benefit for trastuzumab, even 8 years postrandomization, and determined that 2 years of treatment was not better than 1 year.2 The study was presented by Richard Gelber, PhD, of Dana-Farber Cancer Institute in Boston, on behalf of Aron Goldhirsch, MD, lead investigator, who was unable to attend the ESMO meeting.

Between 2001 and 2005, the HERA investigators randomly assigned 5,102 patients to 1 year of trastuzumab, 2 years of trastuzumab, or observation. The striking finding of a 50% reduction in recurrence risk with adjuvant trastuzumab led to the drug’s approval.

In the current landmark analysis with 8 years of median follow-up, there was no evidence of long-term benefit with the longer duration of treatment when trastuzumab was administered as sequential treatment after chemotherapy, Dr. Gelber reported. “One year of trastuzumab remains the standard of care as part of an adjuvant therapy for patients with HER2-positive early breast cancer,” he said.

Interestingly, there was indication of a short-term gain in disease-free survival with 2 years of treatment in the hormone receptor–negative cohort. This raises hypotheses to be further explored, and illustrates the need to evaluate the results by receptor status, he added. “But the conclusion is that there is absolutely no impact from extending trastuzumab beyond 1 year,” he emphasized.

HERA also determined the overall benefit of trastuzumab treatment vs observation at the 8-year follow-up, finding that a robust treatment effect could still be observed. Despite the fact that 52% of the observation arm crossed over to receive trastuzumab, the hazard ratio was 0.76 for both disease-free survival (P < .0001) and overall survival (P = .0005), favoring trastuzumab.

Investigators had expected to see further waning of a survival benefit due to heavy crossover to active treatment. Rather, the value of trastuzumab appeared to increase since the last analysis at 4 years, which showed no significant difference in survival, he added (see Fig. 1).3

“Despite 50% of the follow-up occurring after crossover, we still observed a 24% reduction in deaths, and it is likely that the real effect of 1 year of treatment is substantially greater because of the contamination of the crossover,” Dr. Gelber concluded. “HERA results at 8 years’ median follow-up show a robust and sustained reduction in the risk of recurrence.”

Breast cancer experts commented that the results establish 1 year of trastuzumab as standard of care, but a definitive answer regarding optimal duration is still awaited.

The relative benefit of 6 months vs 1 year of trastuzumab will be evaluated by the PERSEPHONE trial (which is also evaluating sequential and concurrent trastuzumab), and the HELLENIC trial (concurrent therapy). The SHORT-HER and SOLD trials are evaluating 9 weeks vs 12 months of trastuzumab given in conjunction with a taxane, similar to the FinHER trial, which found a benefit for 9 weeks of treatment.4

Martine Piccart, MD, President of ESMO and a breast cancer trialist herself, spoke to the need for more studies. “PHARE doesn’t really tell us that giving trastuzumab for 12 months is superior to 6 months,” she said. “There is still a gray zone, and efforts to determine the optimal duration should continue.” ■

Disclosure: A portion of Dr. Gelber’s academic salary is supported by BIG, which receives funds from Roche to conduct HERA.

Commenting on the PHARE trial and HERA update presented at ESMO, ASCO President Sandra M. Swain, MD, of Washington Hospital Center’s Washington Cancer Institute, said “Today we have seen that 12 months of trastuzumab is better than 6 months, and 12 months is the same as 2 years of treatment, so...

The effect of duration on cardiac events was a key question for the PHARE and HERA trials to answer. In general, longer duration of treatment was associated with more cardiac events, especially declines in left-ventricular function, but overall the risks were low.

Effect of Angiotensin II Inhibition on Response to Immunotherapy