The value of irradiating the internal mammary nodes continues to be debated. This analysis from the British Columbia Cancer Agency in Vancouver found that intentional inclusion of the internal mammary node region did not result in a significant difference in survival, though a small and nonsignificant 3% survival benefit was observed in the subset with one to three positive nodes.1

The study included 2,413 women with early breast cancer who received locoregional radiotherapy and were evaluated according to whether this treatment included internal mammary nodes (n = 1,000) or not (n = 1,413). At a median follow-up of 6.2 years, 5-year recurrence-free survival was 81% and 82%, respectively; distant recurrence-free survival was 82% per arm, and overall survival was 85% and 83% (no statistically significant differences). In the subset with one to three positive nodes, overall survival was 91% for patients who received radiotherapy to the internal mammary nodes and 88% for those who did not—a 22% nonsignificant risk reduction.

“Women with low-burden, node-positive disease are most likely to benefit from internal mammary node radiotherapy,” said Robert Olson, MD, who presented the findings.

Barbara Fowble, MD, of the University of California School of Medicine, San Francisco, the formal discussant of the study, said she sees “problems with the data, but recognizing this, the study suggests there is no benefit.” The 3% overall survival benefit in node-positive patients is not necessarily a result of the internal mammary node radiotherapy, Dr. Fowble pointed out.

After controlling for potentially confounding factors including age, stage, grade, histology, lymphovascular invasion, ER status, type of surgery, and systemic therapy, there was no significant benefit to intentional inclusion of the internal mammary nodal region (HR = 0.95; 95% CI = 0.78–1.15; P = .57). Within the subset of patients with one to three positive nodes, women who received internal mammary nodal radiotherapy had a nonsignificantly better overall survival than women who did not (HR = 0.78; 95% CI = 0.56–1.09; P = .18).

The importance of annual screening mammography, not only in women older than 50 years but also in women aged 40 to 49, was evaluated in an analysis of a statewide breast cancer registry of 5,903 Michigan women.3 Mammography detected 65% of the breast cancers. Women younger than 50 accounted for 26% of all breast cancers and were equally likely to have had their cancer found by mammography as by clinical exam or breast self-exam (46% and 54%, respectively). When compared with patients with mammographically detected tumors, patients who presented with palpable masses presented at later stages (50% stage II vs 18%) and were more likely to receive chemotherapy (22.7% vs 15.7%) and mastectomies (45.8% vs 27.1%).

The United States Preventive Services Task Force (USPSTF) recommended in 2009 against routine screening before age 50 and against teaching breast self-exam at any age, and maintained that the evidence on clinical breast exam was insufficient. According to these recommendations, 42% of the Michigan cohort may have been affected by these proposed screening recommendations.

At a press briefing, Jamie Caughran, MD, of the Lacks Cancer Center in Grand Rapids, Michigan, declined to say whether the study contradicts the USPSTF guidelines, but offered, “You are less likely to need chemotherapy [with mammographically detected tumors], so we would support the rest of the societies that continue to recommend annual screening mammography starting at age 40,” because registry population was that of women who had a diagnosis of breast cancer, unlike USPSTF guidelines that examine a screening population.

Andrew Seidman, MD, of Memorial Sloan-Kettering Cancer Center, who moderated the press briefing, said that while debate will continue, this study speaks to another important consequence of screening: reduced need for chemotherapy. “This is a very important gain, independent of any potential survival benefit,” he said. 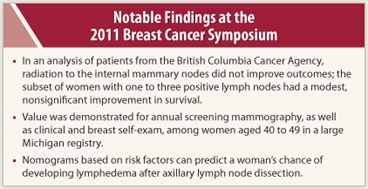 Within 5 years of axillary lymph node dissection, 30.3% of the women developed lymphedema. All the risk factors in the model were significantly associated with the occurrence of lymphedema and were accurate 70% to 74% of the time. The investigators have converted the models into free, user-friendly calculators that will become public once their results are published. ■