In this edition of the Living a Full Life series, guest editor Jame Abraham, MD, FACP, spoke with John Craig Venter, PhD, Founder, Chairman, and Chief Executive Officer of the J. Craig Venter Institute, a nonprofit organization dedicated to human, microbial, and environmental genomic research. A biotechnologist involved in leading the first draft sequence of the human genome, Dr. Venter was once a disinterested student whose first ambition was to surf the waves on the Southern California coast.

Born in 1946 in Salt Lake City, Dr. Venter, the son of Elizabeth and John Venter, moved with his family to the San Francisco Bay area when he was 2 years old. During his youth, Dr. Venter neglected his school work for things he found more satisfying, such as swimming and sailing. In the early 1960s, after graduating from high school, he planned to head to Southern California to take up a surfing career.

“However, because I wasn’t in college, I was drafted into the Navy as a hospital corpsman in 1967, during the Tet Offensive of the Vietnam War,” revealed Dr. Venter. “It was a life-changing experience. I had an aptitude for not only acquiring medical techniques, but also for information. I quickly learned that more medical knowledge translated into more lives saved. During my 365 days of service, I dealt with thousands of casualties, and, unfortunately, despite our efforts, many died. So, my earliest medical education was dealing with young people my age, some even younger than me, dying for a war many did not believe in,” he commented.

Dr. Venter noted that, despite the tragedy of the Vietnam War, he came away with a positive experience, having participated in saving so many young men. When he returned home from Vietnam, he essentially had to start his education from scratch by attending the College of San Mateo, a community college located in the northern corridor of Silicon Valley. He later transferred to the University of California, San Diego (UCSD), where he got a bachelor’s degree and stayed on at the university for his doctoral studies.

“I attained my PhD in physiology and pharmacology in 3 years, so, I guess I made up for some lost time. I credit my experience tending to wounded soldiers in the Vietnam War as the impetus to pursue the field in medicine,” said Dr. Venter.

On a life-changing experience: “I was drafted into the Navy as a hospital corpsman in 1967, during the Tet Offensive of the Vietnam War. I quickly learned that more medical knowledge translated into more lives saved.”

On advice for young scientific researchers: “I would encourage people in science and medicine always to push their beliefs to the limit.”

Learning How to Learn

Asked about mentors during his formal education, Dr. Venter said that during his undergraduate work at the community college, an English professor and a chemistry professor “strongly encouraged me to learn how to learn, since I didn’t pay attention to anything in high school.” UCSD was his first exposure to high-end science, where his background in the medical corps in Vietnam impressed some of the institution’s major scientists.

“During my undergraduate work, I was given my own research lab, which was a sector in the laboratory of Nathan Kaplan, PhD, a renowned biochemist of the past century who discovered coenzyme A. Dr. Kaplan was a great mentor, and that entire experience began shaping my career,” explained Dr. Venter.

“In 1976, I was offered a warm welcome and a faculty position at the State University of New York at Buffalo Medical School,” he continued. “I was given a large lab and resources to begin my career. In 1982, I joined the Roswell Park Comprehensive Cancer Center as Professor and Associate Chief Cancer Research Scientist.”

In 1984, Dr. Venter had the fortune to have his entire laboratory at Buffalo recruited by the National Institutes of Health (NIH) Intramural Program, where he began studying genes involved in signal transmission between neurons. “At the NIH, I took advantage of the substantial research budget and freedom to investigate anything I wanted. In the early 1980s, I was trying to obtain funding for molecular biology research, but my applications were denied. So, I closed my lab for a year, and we trained as molecular biologists,” he explained.

Dr. Venter continued: “We had some unique opportunities and made a few advances. We sequenced one gene using phosphorus-32 radiation, developed by Fred Sanger, but it was a lengthy, discouraging process. Then, in 1984, the first discussion about The Human Genome Project took place. At the same time, my lab acquired the first automated DNA sequencer developed by Applied Biosystems. It led me to make some rapid discoveries at a time when nobody in the serious science community believed the automation was going to work. I was at the right place and time with the right resources and the right ideas.”

Dr. Venter published the first study of sequencing genes using an automated technique, which led to the expressed sequence tag method to identify gene transcripts, which are instrumental in gene and gene-sequences discoveries.

Race to Sequence the Genome

Dr. Venter was appointed Head of the Intratumural Genome Program at NIH. Eventually, Dr. Venter’s groundbreaking work caught the eye of a venture capitalist, Wallace Steinberg, MD, who wanted to launch a genetics-based company.
Dr. Venter insisted on a nonprofit venture, so Dr. Steinberg set him up in The Institute for Genomic Research, a nonprofit supported by a new company, Human Genome Sciences.

“In 1995, I further developed methods of sequencing the first genome in history, the Haemophilus influenzae, a bacterium that causes flu. It shocked the community; for one, it was not one of the NIH-funded programs, which had been ongoing for multiple years. Back then, I predicted my automated DNA-sequencing method would be instrumental in sequencing the human genome and was probably the only one on the planet to believe that. I was offered $300 million to team up with PE Biosystems, which is how Celera Genomics got started,” said Dr. Venter.

Using 300 newly developed high-speed automated DNA-sequencing computers that worked 24 hours a day with almost unattended operation, Dr. Venter led Celera Genomics to quickly become the largest and markedly fastest DNA-sequencing facility. In 1999, the race between Celera Genomics and The Human Genome Project of the NIH was underway, although the NIH stated publicly “it’s not a race.” However, the ever-candid Dr. Venter told Dr. Abraham that it clearly was a competition. On April 6, 2000, Dr. Venter and executives at Celera Genomics announced at the White House to then-President Bill Clinton that a working draft sequence of the human genome was complete. 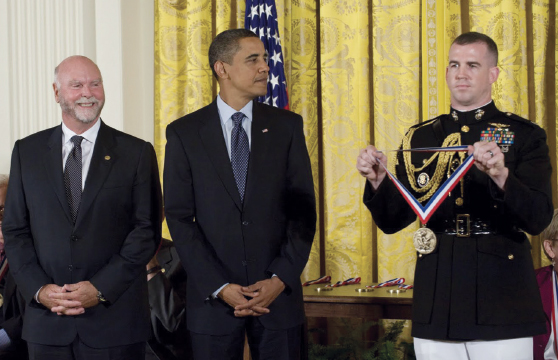 “Once again, I learned it is not healthy for science to maintain a status quo with the standard academic unity that does not value competition. But we, in effect, beat a multibillion-dollar, multiyear government project with a $300 million 9-month project.,” Dr. Venter stated.

During and after his scientific and public battles with the NIH, Dr. Venter recalled receiving numerous awards, including the National Medal of Science presented by President Barack Obama.

Asked about the impact on oncology of sequencing the human genome, Dr. Venter replied: “Its impact is still in the early stages. However, there’s not an agent coming out of the pharmaceutical industry that is not, in some way, based on having the human genome sequenced. Moreover, we took a century off of the traditional way science research is approached. That’s a lot of time when you considered lives saved.”

Five years ago, Dr. Venter helped to establish a company called Human Longevity. “Our health nucleus platform, which uses whole genome–sequence analysis and advanced clinical imaging, screened 1,200 people, most of whom self-described as healthy,” stated Dr. Venter. “However, we found that as many as 40% of those individuals were not as healthy as they thought they were. In fact, 5% of them had major until then undetected tumors. Most of those tumors were discovered at stage 0 or I,” when the chance for cure is greatest.

“My success has come from belief in my data and the approaches I was taking, even when they went against the grain of the entire establishment.”
— John Craig Venter, PhD

In closing, Dr. Venter shared some advice to young scientific researchers. “My success has come from belief in my data and the approaches I was taking, even when they went against the grain of the entire establishment. I would encourage people in science and medicine always to push their beliefs to the limit. If you look at history, many, if not most, of the major advances have been made by people who weathered the storm of detractors from the establishment.”