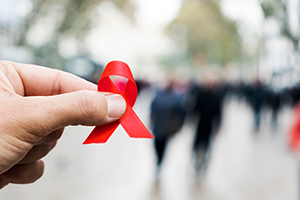 As stated by the investigators, “Concerns about the safety and feasibility of  PD-1/PD-L1 [programmed cell death protein 1/programmed cell death ligand 1] blockade in HIV-1–infected individuals have led to the exclusion of these patients from clinical trials on cancer immunotherapies.”

The multicenter trial included 20 patients with solid tumors for which anti-PD-1 or anti-PD-L1 therapy has approved indications or for which there was data of antitumoral activity with no other available curative therapy. Patients received durvalumab at 1,500 mg every 4 weeks until disease progression or unacceptable toxic effects. All patients had undetectable plasma HIV-1 viremia while receiving combination antiretroviral therapy. Among the 20 patients, 14 had non–small cell lung cancer, 2 had melanoma, 1 had small cell lung cancer, 2 had anal carcinoma, and 1 had bladder carcinoma. Twleve of the 20 had progressed on prior therapy. The primary objective was to explore the feasibility of durvalumab treatment, with feasibility defined as the ability to administer at least a median of four cycles of durvalumab.

Median duration of follow-up was 12.7 months. A median of four cycles of durvalumab (range = 1–16) was administered.

Treatment-related adverse events were observed in 75% of patients and were all grade 1 or 2; the most common were arthromyalgia (55%), asthenia (45%), and nausea/vomiting (25%). Grade 3 or 4 adverse events, considered unrelated to treatment, consisted of grade 3 respiratory infection in one patient and grade 4 arterial ischemia in one patient. Adverse events led to death in two patients, one due to respiratory infection and one due to neurologic disorder; both were considered unrelated to treatment. No adverse events with a potential immunologic cause were observed, including pneumonitis, hypothyroidism, or hypophysitis.

Disclosure: This study was sponsored by the Spanish Lung Cancer Group and supported by the AstraZeneca Group, Spanish Association Against Cancer, and others. For full disclosures of the study authors, visit jamanetwork.com.