Dr. Brawley was born and reared in Detroit, growing up in the turbulent era of the 1960s and 1970s. His mother was a cashier in the local hospital, and his father was a janitor at the Veterans Hospital.

On mentorship: “Mentorship is incredibly important in forming a direction and foundation for a career.”

On his time at the ACS: “During my almost 12 years at the ACS, I focused on putting science back into the process of prevention…. I tried to make hard science replace emotion and personal opinion.”

On his 2012 book: “I was trying to accelerate the conversation about the rational use of health care and get people to realize that we are actually hurting people with overtreatment.”

“Although we came from a traditional blue-collar family, my parents expected that my two sisters and I would attend college, a goal that had eluded them. My parents were from southern sharecropper families. My father grew up under Jim Crow laws that prohibited educational opportunities for black children. So my parents deeply valued education, which had a big impact on my family life. We were sent to private Catholic schools throughout our entire grade-school education. And the quality and structure of the education gave me a solid foundation,” said Dr. Brawley.

During grade school, Dr. Brawley stood out as unusually bright, and the administration steered him into a Jesuit high school in Detroit, considered one of the best academic prep institutions in the state of Michigan. “The Jesuits are fond of saying they don’t teach people what to think; they teach people how to think and assess issues. I learned quite a bit from my Jesuit instructors. In fact, the underpinning of much of the skepticism that has fueled a good part of my career in medicine, such as my work in overscreening for certain cancers and health disparities, was laid during my years with the Jesuits,” said Dr. Brawley. He added, “One Jesuit, Father Polakowski, especially encouraged me to volunteer at a lab at the University of Chicago, which was a good part of the reason I went there for college.”

He continued: “During high school and college, I had a reputation as a good talker and debater, and most people figured I would pursue a career that involved some sort of policy work. But when I went to the University of Chicago, I became very interested in science, especially chemistry. Maybe I started hanging out with the wrong crowd, because I became a hard-core chemistry major. I got to know a physician who was Chief of Infectious Diseases at the University of Chicago Medical Center. We became good friends, and during a series of conversations in my second year of college, he convinced me to apply to medical school.”

“In medical school, I developed a relationship with another important mentor, John Altman, MD,” he noted. “He was famous for work in lymphoma during the 50s and 60s, and his claim to fame was being an early advocate for staging patients. He was heavily involved in the development of the CHOP regimen [cyclophosphamide, doxorubicin, vincristine, prednisone] for non-Hodgkin lymphoma.”

He continued: “John took me under his wing and convinced me that oncology would let me satisfy my scientific curiosities as well as my desire to make changes on the public health level. I was accepted into a lot of cancer fellowship programs, but it was John who convinced me to go to the National Cancer Institute (NCI), because that’s where policy work was being done.”

Dr. Brawley commented that soon after arriving at the NCI, he realized that Dr. Altman’s advice had been spot-on: it was a rich and vibrant environment. Soon into his stay there, he met another mentor—Barry Kramer, MD, MPH.

“Barry had gotten a master’s degree in public health and was very interested in cancer prevention. He realized that the way to make the most headway in cancer was through public health initiatives. After my fellowship, Barry recruited me into the NCI’s Division of Cancer Prevention and Control.”

Asked to reflect on the importance of mentorship, Dr. Brawley responded, “Mentorship is incredibly important in forming a direction and foundation for a career. I’ve mentioned several mentors who have certainly influenced my career. After I accepted the fellowship at the NCI, John Altman told me that medicine is an old-boys’ network, and ‘you can thank me for steering you to the NCI by helping to get more women and minorities into the field.’”

Dr. Brawley continued: “John was an Austrian Jew who’d worked in the OSS [Office of Strategic Services]—the predecessor of the Central Intelligence Agency—during World War II. He’d seen a lot during the war and had developed strong worldviews about inclusion and helping those less fortunate. He imparted that ethos to me and other well-known people in the oncology community, such as Bruce Johnson, Clara Bloomfield, and Richard Schilsky. So the importance of mentorship goes beyond a single mentee. It’s an organic process that enriches the whole field, which of course helps our patients with cancer.”

Dr. Brawley’s name in the oncology community is virtually synonymous with work in health-care disparities. He is a nationally regarded authority whose life’s work has largely centered on closing the racial, economic, and social inequities in the prevention, detection, and treatment of cancer in the United States and globally. Although gains have been made in closing those gaps, Dr. Brawley stressed that there’s still a lot a hard work ahead. “My biggest frustration deals with a body of folks in modern medicine who fail to evolve. One of the most important philosophies in medicine is self-introspection—we need to constantly question ourselves and rethink the status quo. Much of our medical knowledge from 2000 is not valid in 2019. Cancer screening is the most obvious example of following dogma that doesn’t produce better outcomes, but rather, for many tumor types, leads to unnecessary harm and a waste of our precious resources.”

Bringing Science to the Fore in Decision-Making

From 2007 to 2018, Dr. Brawley served as the Chief Medical and Scientific Officer for the ACS, where he was responsible for promoting the goals of cancer prevention, early detection, and quality treatment through cancer research and education. He reflected on his tenure at the venerable Society.

“We do far too much that results in far too little. We need to take the emotional conflicts of interest out of policymaking and rely on science and what works.”
— Otis W. Brawley, MD, MACP, FASCO

“During my almost 12 years at the ACS, I focused on putting science back into the process of prevention. Even to this day, there are a lot of people who don’t understand the nuances of screening, yet they want to give advice. I tried to make hard science replace emotion and personal opinion,” he said.

Dr. Brawley added: “I hope that my work there brought a better understanding of clinical trial data and scientific knowledge into the policy decisions. In a 2011 JAMA paper,1 we actually changed the process for creating screening guidelines, requiring that a group of experts be hired to comb through the literature and write a report on screening for a particular cancer. The new process should ensure that guidelines are based on trustworthy information for both health-care practitioners and the general public. That change of methodology is probably my biggest contribution to policymaking at the ACS.”

In 2012, Dr. Brawley published How We Do Harm: A Doctor Breaks Ranks About Being Sick in America,2 a book that won accolades and raised eyebrows among some people in health care. Dr. Abraham asked Dr. Brawley to encapsulate the purpose of his acclaimed book.

“There was a lot of information in the book, but if I were to cut to the core, I’d say that I was trying to accelerate the conversation about the rational use of health care and get people to realize that we are actually hurting people with overtreatment,” he said. “We’re giving chemotherapy to people who don’t need it. We’re screening men for prostate cancer when it might save lives, but we make them think it definitely does. Our health-care system is failing the public, and there’s a lot of blame to go around. But the main message I tried to get across is waste. We do far too much that results in far too little. We need to take the emotional conflicts of interest out of policymaking and rely on science and what works.” 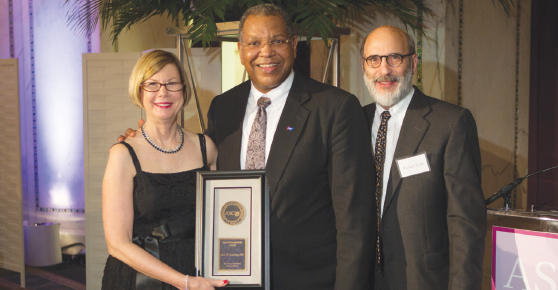 Dr. Brawley recently became the Johns Hopkins University’s 39th Bloomberg Distinguished Professor, and he will lead interdisciplinary research on cancer health disparities at the Public Health and Kimmel Cancer Center. He shared a thought on his new position with Dr. Abraham.

“This position gives me a more flexible platform to continue my work looking at how health care—especially oncology—is practiced. I can be more vocal about the appropriate interpretation and application of science in how we relieve human suffering,” he said.

“In the United States, there are areas where health disparities don’t exist to the point of affecting outcomes, yet some people want to do studies on genetic and racial differences in response to treatment,” he continued. “Let’s get away from that. This is a policy issue, not an issue of genetic differences. The problem is in finding a way to deliver health care to everyone who deserves it. And my new position allows me to challenge policymakers in a way I could not at the ACS.”

How does a super-busy oncologist-activist balance his career and personal life? “I’m very fortunate because I have a fire in the belly that motivates my life. The things I just spoke about excite me. It’s what I get up for in the morning. So I feel fortunate to have that opportunity to write and teach and interact with patients who’ve been affected by the system, negatively or positively.”

He added: “I have two daughters who are very interested in the policy issues that I’m involved in. And I have an incredible wife, who’s an attorney; she’s also supportive of my work. I still see patients with cancer. And they keep me grounded, focusing on the important things in life.” ■

2. Brawley OW: How We Do Harm: A Doctor Breaks Ranks About Being Sick in America. New York, St. Martin’s Press, 2012.