The ASCO Post’s Integrative Oncology series is intended to facilitate the availability of evidence-based information on integrative and complementary therapies sometimes used by patients with cancer. In this installment, Shelly Latte-Naor, MD, and Jyothirmai Gubili, MS, explore the use of capsaicin, which has become popular as a pain reliever and is used by many patients with cancer.

A colorless, pungent compound, capsaicin is derived from cayenne pepper, a shrub native to Central and South Americas but now cultivated in many tropical and subtropical climates. It has been used in traditional medical systems to alleviate muscle and arthritic pain and to treat cluster headaches and psoriasis.

Currently, capsaicin is used to manage pain associated with osteoarthritis, rheumatoid arthritis, mastectomy, postherpetic neuralgia, and diabetic neuropathy as well as to reduce the severity of psoriasis and pruritus. It is marketed in the form of capsules and as an ingredient in topical creams, gels, and lotions. Prescription-strength dermal products are also available, one of which containing 8% capsaicin is approved by the U.S. Food and Drug Administration for postherpetic neuralgia.

Clinical data indicate the benefits of topical formulations containing low-concentration capsaicin (0.025%) for psoriasis1; (0.025%–0.3%) for prurigo nodularis2; and (0.006%) for pruritus ani.3 Topical capsaicin is also included in the American College of Rheumatology recommendations for osteoarthritis,4 but its effectiveness for rheumatoid arthritis remains inconclusive.5

A high-concentration dermal patch containing 8% capsaicin has also been investigated for its benefits. A 4-week randomized trial of 44 patients with postherpetic neuralgia found a single 60-minute application to be safe and effective in reducing the numerical pain rating scores compared with the control (P = .003). Furthermore, the reductions in pain were maintained with repeated administrations over 1 year.6 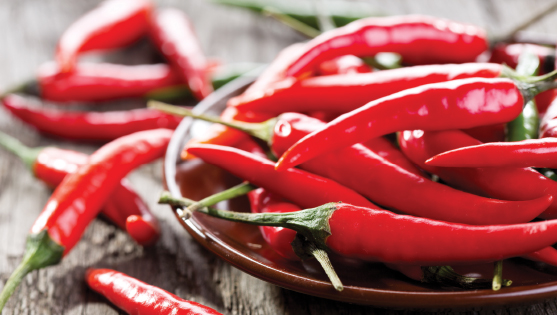 In a phase IV multicenter study involving 420 patients with nondiabetic peripheral neuropathic pain, the capsaicin patch produced rapid, sustained pain relief and improved health-related quality of life (half of all patients achieved a clinically important ≥ 30% reduction in mean numerical pain rating scores ‘average pain’ by weeks 2 and 8 after the first treatment, which was sustained in patients who received retreatment).7

A meta-analysis of 25 randomized trials reported the capsaicin patch to be as effective as oral agents such as duloxetine and gabapentin for painful diabetic peripheral neuropathy without the adverse effects associated with these agents.8

Capsaicin has been shown to have short-term benefits in patients with fibromyalgia as well. In a randomized study (n = 30), topical capsaicin (0.075%) applied 3 times daily for 6 weeks (used along with standard treatment) yielded significant improvements in myalgic score (P = .02) and global subjective improvement (P = .001) compared with the control.9

Also, preliminary findings suggest the utility of topical capsaicin (0.025%), applied to the external auditory canal, for improving swallowing function in a study of elderly patients with dysphagia (n = 20). The reduction in endoscopic swallowing scores in the capsaicin group was significantly greater than in the placebo group 30 and 60 minutes after treatment (P < .05).10 Additional case series indicate that topical capsaicin (0.025%) may also be effective for cannabis-associated hyperemesis.11,12

An intranasal capsaicin spray (administered twice daily over 2 weeks) was reported useful for alleviating symptoms in patients with nonallergic rhinitis (n = 42), with significant differences in changes from baseline to the end of the study for total nasal symptom scores and individual symptom scores (P < .01).13 Whether capsaicin can relieve cluster headaches remains to be determined.14

In a crossover study of 99 patients with cancer who had postsurgical neuropathic pain, a capsaicin (0.075%) cream, applied at the pain site 4 times daily, produced substantial pain relief (P = .01) compared with placebo. However, it was also associated with significant skin burning, skin redness, and cough
(P < .0001 for each).17

In another study of 18 patients with oxaliplatin-induced neuropathy, a single application of 8% capsaicin patch decreased pain. Patients with a low sensitivity to neurotoxic agents had higher pain reduction after 8 days (P = .02), with reductions also observed after 12 weeks (P = .04).18

However, long-term topical application of capsaicin was shown to increase skin carcinogenesis in mice treated with a tumor promoter,19 although such effects may be dose-dependent.20 More research is needed to evaluate the role of capsaicin in cancer symptom relief.

Mechanistic studies revealed that the analgesic effects of capsaicin are due to depolarization of C-fiber polymodal nociceptors,21,22 which causes the release of substance P, a neurotransmitter that relays pain signals to the brain.23 This results in an initial increase in pain, but after repeated exposures, pain subsides due to the eventual depletion of substance P at afferent neurons.24 Also, capsaicin activates transient receptor potential vanilloid subfamily member 1 (TRPV1, referred to as a capsaicin receptor),25 resulting in selective and reversible defunctionalization of cutaneous sensory nerve endings expressing TRPV1.26

Topical application of capsaicin has been associated with mild to severe adverse effects, including dermatitis and cough. Therefore, patients using capsaicin creams, patches, or other preparations require careful guidance by physicians and pharmacists to ensure correct application and to minimize the risk of adverse effects.

Over-the-counter topical products have been reported to cause burning, urticaria, and contact dermatitis; mild to moderate cough17,28; pain and pruritus at the application site18; and serious burns requiring hospitalization.29

Intranasal use of capsaicin resulted in a burning sensation, lacrimation, and rhinorrhea.14

Coronary vasospasm and acute myocardial infarction were observed in a 29-year-old man following use of a topical capsaicin patch for 6 days. Improvement was seen after treating symptoms and removing the patch.30

Bilateral acute anterior uveitis was reported in a 38-year-old woman after application of an analgesic capsaicin patch for muscular neck pain. Inflammation was controlled within 1 week following the use of topical corticosteroids.31

Cytochrome P450 2C19 substrates: Capsaicin inhibits CYP2C19 and can affect the intracellular concentration of drugs metabolized by this enzyme.33

Cytochrome P450 3A4 substrates: Capsaicin induces CYP3A4, which may increase the clearance of substrate drugs when used concomitantly.33

Capsaicin is an herbal compound with a long history of traditional use. Limited clinical studies demonstrated beneficial effects of topical capsaicin for the treatment of postherpetic neuralgia, as well as diabetic- and nondiabetic neuropathic pain.

Topical application of capsaicin has been associated with mild to severe adverse effects, including dermatitis and cough. Therefore, patients using capsaicin creams, patches, or other preparations require careful guidance by physicians and pharmacists to ensure correct application and to minimize the risk of adverse effects. ■

4. Hochberg MC, Altman RD, April KT, et al: American College of Rheumatology 2012 recommendations for the use of nonpharmacologic and pharmacologic therapies in osteoarthritis of the hand, hip, and knee. Arthritis Care Res (Hoboken) 64:465-474, 2012.

29. U.S. Food and Drug Administration: FDA Drug Safety Communication: Rare cases of serious burns with the use of over-the-counter topical muscle and joint pain relievers. Available at www.fda.gov/Drugs/DrugSafety/ucm318858.htm. Accessed May 3, 2019.