A Conversation With Alan Alda 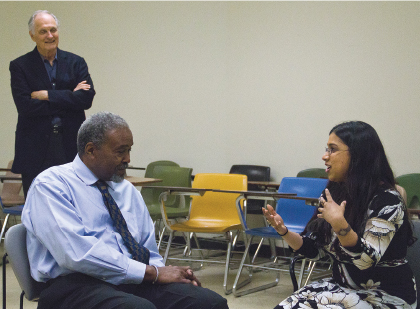 Clarity and accuracy don’t go against each other. I don’t think science was ever hurt by more clarity.

Alan Alda’s passion and appreciation for science extend nearly as far back to his early life as his love of acting. The son of actor Robert Alda, Mr. Alda began his acting career at the age of 16. Although he has appeared in such widely acclaimed films as The Seduction of Joe Tynan, Crimes and Misdemeanors, and The Aviator, for which he received an Academy Award nomination, he is perhaps best known for his role as the wise-cracking surgeon Hawkeye Pierce in the long-running television series M*A*S*H.

Science became a parallel passion when Mr. Alda was in his 20s, and he began pouring through issues of Scientific American cover to cover. In 1993, Mr. Alda became the host of the PBS series Scientific American Frontiers. He conducted hundreds of interviews with scientists during 11 seasons of the program. Mr. Alda found that when scientists discussed their work one on one, they usually gave lively and engaging explanations but would occasionally slip into lecture mode, and he wondered whether a program could be designed to help them use conversational skills to communicate their research more effectively with the public.

The program requires all medical students to receive 10 hours of training and includes Improvisation for Scientists, a workshop pioneered by Mr. Alda that uses improvisational theater techniques to help scientists speak more spontaneously and directly with their audience, as well as workshops in Writing About Science for the Public and Media Interview Skills. The Alan Alda Center also offers these workshops to academic and medical institutions across the country, including The Rockefeller University in New York, the University of Michigan Medical School in Ann Arbor, and the University of California in Los Angeles. The program has proved to be so beneficial to students that Dartmouth College, the University of Vermont, and the Robert Wood Johnson Medical School have become affiliates of the center, and other universities are considering developing similar programs.

The ability to describe science effectively, said Mr. Alda, can result in providing not just the general public with a greater understanding of science but policymakers in charge of research funding as well. “There isn’t anyone who would give out money for something he doesn’t understand,” said Mr. Alda.

Mr. Alda’s work in helping to broaden the public’s appreciation for science has garnered him the Sagan Award; the AAAS Kavli Science Journalism Award for the PBS series, The Human Spark; and the Scientific American Lifetime Achievement Award.

The ASCO Post spoke with Mr. Alda, Co-Founder of the Alan Alda Center for Communicating Science and Visiting Professor at Stony Brook University, about the development of the center; the need for scientists to hone their communication skills; and how more effective communication can improve the public’s understanding of science.

Why is it important for you to help future scientists learn to communicate their ideas more clearly?

By the time I finished hosting Scientific American Frontiers, I realized that we had almost by accident stumbled upon a good way for scientists to communicate with the public, which was through conversation. Speaking one on one with scientists made them much less likely to go into lecture mode, which is usually difficult to understand but also does not have the same human flavor to it.

And I wondered two things: One was whether scientists could benefit from exposure to a program that would help them experience the same sense of warm human contact they had had in a conversation with someone, even when they were up alone on a stage peering into an audience or when they were writing for the public. The second thing I wondered was whether we could teach scientists to become effective communicators from the time they are learning about science, so they would leave school as both accomplished scientists and accomplished communicators.

In the improvisational workshops we have developed, we are not asking scientists to be funny or make up stories, which is the usual notion of what improvisation is, but rather we use theater games to help them talk about their work more directly. And what is interesting to see is that they gladly engage in the process of making real contact with the people with whom they are playing these games, which then results in better contact with the audience.

The games and acting exercises are designed to help scientists build up a certain amount of empathy with the person they are talking to and the theory of mind, so they can actually anticipate what the other person is thinking and determine whether the person is getting what is being said. And the most important thing is not what the scientist is saying but what the other person understands, because you can say the most brilliant things, but if what you are saying is jargon to your audience, if it sounds like you are speaking a foreign language, or if you are putting the person off with your manner, you might as well have not said anything.

How can participation by oncologists in the Improvisation for Scientists workshops help them communicate more effectively with their patients, colleagues, the media, and public officials?

There is an especially strong need for oncology researchers to communicate effectively with policymakers in charge of issuing grants and determining research funding. I saw in the PBS documentary Cancer: The Emperor of All Maladies that research funding has gone down 25% instead of going up, and that’s a disaster. (See “Bringing the History of Cancer to Film,” in the March 10, 2015, issue of The ASCO Post.) Part of the problem might be due to poor communication of the idea the researcher is proposing, because so many proposals are full of jargon and specific details of biologic processes that policymakers don’t understand and cannot be expected to know. Scientists have to be able to translate what they are saying so it is understood.

There isn’t anyone, I don’t think, who would give out money for a project he or she does not understand. It is the job of the communicators to make clear what they are saying.

On the first point you made about communicating more effectively with patients, we all have had encounters with doctors, with some being outstanding communicators and some having been wanting. And what we have found through our work with a lot of medical schools is that the difference, to a great extent, is the physician’s ability to make a real connection with the patient and to understand what the patient is feeling.

There are several definitions of empathy, but I think of empathy as two different experiences. One is the cool kind, where you are cognitively aware of what the other person is going through, and the other is the hot kind, where you take on the emotions of the other person. The hot kind is probably detrimental, because, for example, if your doctor looks as your x-ray and says, “Oh, my God, no,” that is not a good response.

Conversely, if the second the doctor comes into the room he can tell from the patient’s face and body language that the patient is anxious and he can speak to that anxiety, the experience for the patient will be a lot better.

In terms of relaying scientific information to the media, I think better communication is the answer to poor reporting. Scientists need practice talking with the media, so they can describe their work briefly, clearly, and accurately and not dumb it down. That’s very important, and we stress that constantly. Clarity and accuracy don’t go against each other. I don’t think science was ever hurt by more clarity.

What have you observed in the way scientists communicate their work before and after they have participated in your improvisational workshops?

We were conducting a workshop at a university, and a scientist there had had a breakthrough in his work that had been reported in his university press. After he took our workshop, he talked about his work and wrote about it in a completely different way. It was still accurate, but his words had imagery that the public could understand, and his work was later reported in publications around the world.

The techniques scientists learn in our workshops that improve their public speaking can also be used to improve their writing, because the same process is at work, which is being aware of what the person listening to or reading the work is thinking. Is the person ready to hear the next idea, and how can the scientist prepare the audience for the next idea?

And scientists need to more clearly communicate their ideas not just to lay people but to other scientists as well. One of the observations I’ve made, and it was kind of surprising when I realized it was true, is that scientists often don’t understand one another unless they are in the exact same field—and sometimes unless they are in the same laboratory—because they develop an academic shorthand. This saves time and it’s a way to communicate easily with people familiar with the work, but it can cause trouble when people are not all on the same page.

When the National Institutes of Health was starting up the Brain Research Through Advancing Innovative Neurotechnologies (BRAIN) initiative, a group of neuroscientists and nanoscientists got together and wasted hours discussing the word “probe,” because they couldn’t agree on its meaning. That’s awful. So scientists need to communicate more effectively with each other and, very importantly, across disciplines, as well as with the public at large.

Less than 5% of Americans participate in clinical trials, in some cases because they have a misunderstanding of trial information. How can scientists involved in oncology care help patients have a better understanding of the true risks and benefits of scientific research so they can make informed decisions?

This is just a guess, because we don’t have hard data on this issue, but we are beginning to understand that if you build familiarity and trust with the people you are trying to help understand complex information, you will have greater success. If they think a stranger in a white coat is forcing some dangerous experiment on them, people become self-protective, so establishing a familiarity with the scientist as a caring, trustful person can help break through the barrier. I don’t think people can be convinced by arguing them into complying with what you want them to do, but if the information is presented clearly and compassionately, it might make a difference.

For more information about the Alan Alda Center for Communicating Science, visit www.centerforcommunicatingscience.org. ■

Alan Alda, Co-Founder of the Alan Alda Center for Communicating Science and Visiting Professor at Stony Brook University, suggests these steps to improve scientific communication. The ability to be empathic and imagine what someone else might be thinking or feeling is the key to becoming a more...