Forward Progress in Myelodysplastic Syndromes Is Largely in Genetics 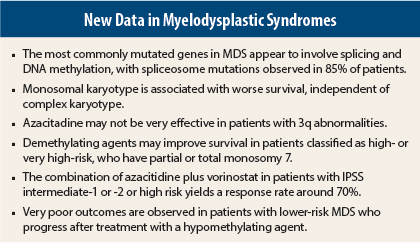 New genomics research is leading to a better understanding of MDS heterogeneity and disease biology, and may identify new treatment targets. There have been no new breakthrough drugs, though some combinations with azacitidine appear promising.

Most recent advances in the management of myelodysplastic syndrome (MDS) are in the area of genetics, according to Steven Gore, MD, of Yale University School of Medicine, New Haven.

“New genomics research is leading to a better understanding of MDS heterogeneity and disease biology, and may identify new treatment targets. But there have been no new breakthrough drugs—it’s been a ho-hum year in that regard—though some combinations with azacitidine appear promising,” Dr. Gore said in a review of the topic at the 2014 Highlights of ASH in North America meeting in Miami.

Dr. Gore drew from the most important studies presented in MDS at the American Society of Hematology (ASH) Annual Meeting to present his “highlights” in the field.

A mostly Japanese team of researchers further mapped the genetic landscape of MDS, finding that among 944 MDS patients, the genes most commonly mutated were involved in splicing and DNA methylation.1 Spliceosome mutations were observed in 85% of patients, and they essentially never overlapped with other spliceosome mutations. “One is all you appear to need,” he said.

The researchers combined mutational status with conventional prognostic factors to construct a prognostic model, though this work remains clinically premature. The most important finding will be the identification of genetic targets that are druggable—for example, agents targeting spliceosome mutations might be effective. “This will be required for us to take the next quantum leap,” Dr. Gore said.

A retrospective European study of MDS and acute myeloid leukemia (AML) patients with 3q abnormalities showed that azacitidine was not very effective in these subgroups, whose median overall survival was 10.6 months.3 One cytogenetic subgroup—patients with t3q21 mutations—appeared to fare much better, as their median 4-year overall survival was not yet reached.  Additionally, the study showed that patients with overexpression of the tumor-suppressor gene EVI1 had a prognosis as poor as those with 3q structural abnormalities.

Finally, in a study by the German Multicenter Study Group, demethylating agents significantly improved overall and AML-free survival in MDS patients classified as high risk by the International Prognostic Scoring System (IPSS) or very high risk by the revised system (IPSS-R), and have partial or total monosomy 7.4

“These abstracts confirm the adverse prognostic importance of abnormalities of chromosomes 3 and 7, and the monosomal karyotype. The monosomal karyotype retains prognostic value independent of age, risk, trisomy 8, and other features. We also learned that EVI1 overexpression is comparable in prognosis to chromosome 3 structural abnormalities, though we cannot yet test for this,” Dr. Gore said.

The growing identification of mutations that appear to be associated with prognosis is not yet clinically applicable, according to Dr. Gore, who says he does not yet test for these. “I don’t think there are prospective data showing the consequence of clinical decisions based on genetic criteria, or data that show the extent to which this information adds to our clinical prognostic scoring system,” he said. “Though the genetic data are interesting, we still have validated clinical data and clinical judgment. At this point, I would not take the patient who is low risk by all conventional criteria, but who has a mutation believed to be associated with risk, and treat that patient as high risk.”

The New York Cancer Consortium phase II 6898 study combined azacitidine plus vorinostat (Zolinza) in patients with IPSS intermediate-1 or -2 or high risk, naive to these agents, and achieved response rates of 67% to 73%.5 These rates are much better than the historical results with azacitidine alone, Dr. Gore pointed out, adding that randomized trials of high-risk patients are needed to confirm the benefit of combination therapy in the front-line setting. This is the aim of the S1117 study.

A phase I dose-escalation/expansion study of ARRY-614 showed promise in patients with IPSS low/intermediate-1 risk.6 The compound inhibits p38 MAP kinase, a major regulator of pathways that sense stress and inflammation, and also Tie2, which has pleiotropic effects on progenitors and AML blasts. ARRY-6143 reduced phoso-p38 in the bone marrow and led to durable responses in 20% of patients.

In the largest cohort of lower-risk MDS patients ever treated with hypomethylating agents, investigators confirmed very poor outcomes after disease progression.7 The study included 423 patients with IPSS low- and intermediate-1 risk treated with a hypomethylating agent at The University of Texas MD Anderson Cancer Center and Moffitt Cancer Center between 2000 and 2011. Patients received a median of six cycles for a median duration of 7 months.

In the multivariate analysis, the following were predictive of progression into a higher-risk category: lack of response to a hypomethylating agent (odds ratio [OR] = 1.8; P = .02), absolute neutrophil count < 1.5 × 109/L (OR = 3.2; P = .02) and IPSS intermediate/poor (OR = 6.0; P = .01). In low-risk MDS patients, after failure on hypomethylating agents, median survival was 10 months without further treatment, 28 months with conventional treatment, 39 months after stem cell transplant, and 17 months with investigational treatment.

“Even low-risk patients who don’t respond to [hypomethylating agents] don’t do well,” Dr. Gore pointed out. “We have to ask, are we harming our patients by giving these drugs? Are we introducing new mutations? I don’t give azacitidine to low-risk patients, because I worry about this,” he said.

“The mechanisms underlying the lack of response require investigation. By understanding the reasons (which could be genetic, pharmacologic), rational salvage treatments or regimen modifications may be possible,” Dr. Gore suggested. ■

Disclosure: Dr. Gore is a consultant for and has received research support from Celgene.