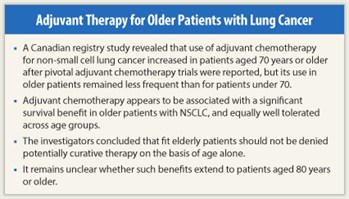 Cisplatin-based adjuvant therapy is recommended for patients with resected stage II–IIIA non–small cell lung cancer (NSCLC). There have been no trials of adjuvant therapy in elderly patients with NSCLC, who constitute a large part of the NSCLC population. A number of analyses indicate that older patients benefit from adjuvant therapy with acceptable toxicity, including a retrospective analysis of the National Cancer Institute of Canada and Intergroup Study JBR.10 trial1 and the Lung Adjuvant Cisplatin Evaluation (LACE) meta-analysis.2  However, it remains unclear to what degree such patients are receiving adjuvant therapy in clinical practice.

Elderly patients were significantly more likely to be male and to have comorbidities, longer postoperative inpatient stays, and squamous histology. They were significantly less likely to be treated at regional cancer centers, to undergo pneumonectomy or postoperative radiotherapy, and to have adenocarcinoma. For the periods 2001–2003 and 2004–2006, respectively, 1,697 and 1,844 patients were aged less than 70 years, 623 and 694 were aged 70 to 74 years, 446 and 534 were aged 75 to 79 years, and 184 and 282 were aged 80 years or older.

Detailed data on chemotherapy were available from 584 patients treated at regional centers in 2004–2006. Cisplatin/vinorelbine was the most commonly used regimen across all age groups. However, carboplatin-based regimens were used significantly more frequently in elderly patients, accounting for treatment in 7% of patients aged less than 70 years, compared with 18% of those aged 70 to 74 and 75 to 79 years and 29% of those aged 80 years or older (P = .007). Chemotherapy appeared to be equally well tolerated across age groups, with no significant age-related differences being observed in frequency of changing from cisplatin to carboplatin or other drugs, or in frequency of dose reduction or interruption.

Treatment-related toxicity was assessed by evaluating hospital admissions within 6 months after surgery. Compared with the preadoption cohort, hospitalizations within 6 months after surgery declined in elderly patients in the postadoption cohort (40.0% vs 38.3%), suggesting that more common use of adjuvant therapy did not increase treatment-related toxicity.

As stated by the authors, these findings suggest that the benefits of adjuvant therapy in elderly patients that have been identified in analyses of clinical trials are being realized in general practice—although it remains unclear whether such benefits extend to patients aged 80 years or older. However, the findings also indicate that adoption of adjuvant therapy lags in the elderly. The investigators noted, “Significant efforts … are necessary to improve understanding of the reasons underlying this apparent low utilization in the elderly and to promote referral of such patients to medical oncology to ensure that fit elderly patients are not denied potentially curative therapy on the basis of age alone.” ■


May
27
Today In Oncology

Cancer Care at Tata Memorial Centre During the COVID-19 Pandemic

Karen Wonders, PhD, on Benefits of Exercise During Cancer Treatment