I Refuse to Let Cancer Win

My battle with cancer started with a simple sore throat in June 2005. Despite two rounds of an antibiotic to clear up the problem, within 2 months my throat hurt so much I couldn’t swallow, and a mysterious lump had suddenly appeared on my tongue. By the end of August, I was diagnosed with stage IIIB squamous cell carcinoma of the tongue that had metastasized to the lymph nodes in my neck. 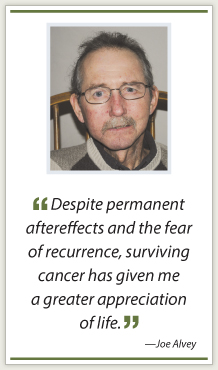 I was admitted to the hospital for 2 weeks of tests to determine if I was healthy enough to withstand the grueling treatment that lay ahead and to also wean me off my two primary vices: smoking and drinking. The first stage of my treatment protocol required 15 hours of surgery to remove half my tongue and replace it with tissue from my left arm, a nerve transplant from my left wrist to my left elbow, and a radical neck dissection to remove the malignant lymph nodes. The surgery was so extensive, when my father saw the black lines my doctor had drawn on my face and arms indicating where he was going to make his incisions, he cried. After the surgery, I was put into an induced coma for 4 days to give my wounds time to heal and then released from the hospital 2 weeks later.

What followed were months of cisplatin chemotherapy and 33 rounds of radiation therapy. The therapy, along with my surgery, rendered me unable to eat and required the placement of a PEG tube so I could get nutrition. Although the tube, thankfully, has been removed, I can’t say that I can eat normally. But I am able to eat, and I’ve managed to regain 5 of the 85 lb I’ve lost.

What’s more troublesome, however, is how the treatment has affected my speech. Even though I pride myself in my ability to communicate, I’m no longer always clearly understood when I speak, especially by strangers, and I sometimes have to preface a conversation by explaining that I’m not drunk or mentally challenged.

Living with the Fear of Recurrence

Although the treatment for my head and neck cancer was successful, a nagging cough brought me back to my primary care physician in 2007 for a checkup. Because of my history as a smoker and cancer survivor, CT and PET scans of my chest were performed, which showed a shotgun pattern of tumors in both lungs. I was told I might have just 10 months to live.

It turned out that most of what appeared to be masses were actually the remnants of a lung infection I’d had. However, there was one mass in my lower right lobe that looked suspicious enough for my doctor to recommend biopsying. The tumor was malignant, and although it was squamous cell carcinoma, it couldn’t be determined whether this was a new cancer or a metastasis, and the lobe was removed. Because I wanted to be as aggressive as I could to stay cancer-free, I opted for adjuvant chemotherapy, which consisted of many rounds of carboplatin and paclitaxel.

The past 7 years have been difficult, but I’ve gotten through them with hope and humor. Did smoking and drinking cause my cancer? Maybe. Or maybe it happened because I have a strong family history of cancer. Maybe it’s both. The reason why I got cancer isn’t as important to me as what I’m doing now as a result of having the disease, and that’s celebrating life. If I can make one person laugh, provide for my family, and spend time with my loved ones and friends, I’ve had a good day.

Today, I’m cancer-free, but I know that that could change at any moment. Every little cough or hiccup leads me to wonder, is this a cancer recurrence?  But I refuse to be overcome with fear and let the cancer win.

The common thread throughout my diagnoses and treatments has been my oncologist, who has been a critical part of my team from the very start and who continues to monitor my health and point me in the right direction for help if and when anomalies are reported.

Cancer has given me an awareness about the preciousness of life that perhaps others don’t have. That awareness is helping me live the best life I can have while I’m still here. ■