Among older women with invasive breast cancer and treated with lumpectomy, brachytherapy compared with whole-breast irradiation was associated with a decreased likelihood of long-term breast preservation and an increased likelihood of complications, but no difference in overall survival, according to a study published recently in the Journal of the American Medical Association.1

Grace L. Smith, MD, PhD, MPH, of The University of Texas MD Anderson Cancer Center, Houston, and colleagues conducted a study to compare breast brachytherapy vs whole-breast irradiation and the likelihood of long-term breast preservation, complications, and survival among older Medicare patients diagnosed with invasive breast cancer.  According to the authors, “In recent years, use of breast brachytherapy after lumpectomy for early breast cancer has increased substantially despite a lack of randomized trial data comparing its effectiveness with standard whole-breast irradiation. Because results of long-term randomized trials will not be reported for years, detailed analysis of clinical outcomes in a nonrandomized setting is warranted.”

The retrospective population-based study included 92,735 women ages 67 years or older with incident invasive breast cancer, diagnosed between 2003 and 2007 and followed up through 2008. After lumpectomy, 6,952 patients were treated with brachytherapy vs 85,783 with whole-breast irradiation. 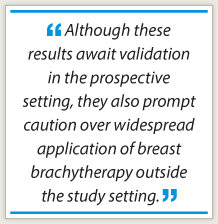 Disclosure: The authors of the JAMA paper reported no potential conflicts of interest.