The WHO Classification of Tumors of Hematopoietic and Lymphoid Tissues

The ASCO Post is pleased to present Hematology Expert Review, an ongoing feature that quizzes readers on issues in hematology. In this installment, Drs. Syed Ali Abutalib and L. Jeffrey Medeiros explore the updated World Health Organization (WHO) classification of hematopoietic and lymphoid tissue malignancies, focusing on mantle cell lymphoma. For each quiz question that follows, select the one best answer. The correct answers and accompanying discussions appear below.

Which of the following statements about the epidemiology of MCL is correct?

A. MCL is more prevalent in women than men.

B. The median age of diagnosis is 45 years.

C. MCL accounts for 8% of all non-Hodgkin lymphomas.

D. MCL is more common in Black than White individuals.

Which of the following statements about the clinical features of MCL is/are correct?

A. Tropism for the gastrointestinal tract is common.

C. The central nervous system may be involved in MCL.

Which of the following statements about the cytologic spectrum of MCL is correct?

A. In most cases, the neoplastic cells resemble centroblasts.

B. The marginal zone–like variant has foci or small areas of cells without monocytoid differentiation.

C. The blastoid variant is composed of cells that may closely resemble lymphoblasts.

Which of the following statements about in situ mantle cell neoplasia is/are correct?

A. It is characterized by cyclin D1–positive neoplastic lymphoid cells that are restricted to the inner half of the mantle zones of otherwise reactive follicles.

B. Detection of in situ mantle cell neoplasia should prompt a staging workup to exclude overt MCL.

C. Patients usually do not require any specific therapy.

Which of the following statements about immunophenotypic findings in MCL is correct? 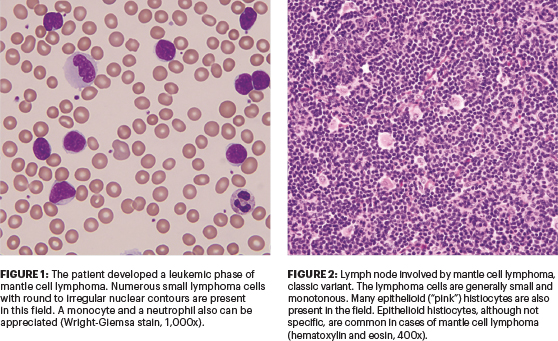 Which of the following statements about the epidemiology of MCL is correct?

Correct answer: C. MCL accounts for 8% of all non-Hodgkin lymphomas.

MCL accounts for approximately 3% to10% of non-Hodgkin lymphomas. It occurs in middle-aged to older individuals, with a median age of diagnosis of around 68 years. MCL is much more common in men than women, with a ratio of ~2:1. In the United States, the incidence of MCL appears to be rising and is higher in White Americans than in Black or Asian Americans.1,2

Which of the following statements about the clinical features of MCL is/are correct?

Correct answer: D. All of the above.

Gastrointestinal and particularly colon involvement at diagnosis of MCL is common. Most patients with gastrointestinal tract MCL are asymptomatic, but a subset of patients present with a syndrome known as multiple lymphomatous polyposis, which is usually associated with gastrointestinal symptoms.2 Most patients present with advanced-stage disease (stage III or IV) with lymphadenopathy, hepatosplenomegaly, and bone marrow involvement. Peripheral blood involvement is a common finding (Figure 1), and variants of MCL can mimic CLL/SLL, marginal zone lymphoma, the leukemic phase of follicular lymphoma, prolymphocytic leukemia, and rarely acute leukemia (eg, blastoid variant). Involvement of the central nervous system may occur, most commonly at the time of relapse, and may be more common in patients with aggressive, blastoid, or pleomorphic variants of MCL.

Which of the following statements about the cytologic spectrum of MCL is correct?

Correct answer: C. The blastoid variant is composed of cells that may closely resemble lymphoblasts.

Most cases of MCL (classic or typical variant) are composed of monomorphous small- to medium-size lymphoid cells with slightly to markedly irregular nuclear contours, most closely resembling centrocytes (Figure 2). The nuclei have at least somewhat dispersed chromatin but inconspicuous nucleoli. Neoplastic transformed cells resembling centroblasts, immunoblasts, or paraimmunoblasts and proliferation centers are absent; however, foci mimicking proliferation centers may be present, and a spectrum of other morphologic variants (blastoid, pleomorphic, and marginal zone–like) are recognized, which can also cause diagnostic confusion. The marginal zone–like variant has foci or large areas of cells with pale cytoplasm resembling monocytoid differentiation and can be confused with marginal zone B-cell lymphoma. The blastoid variant is composed of cells that may closely resemble lymphoblasts. In the pleomorphic variant, the neoplasm is composed of a heterogeneous population of cells, including large cleaved or round cells that can have prominent nucleoli. Mitotic figures are also increased, and this variant can resemble large B-cell lymphoma.

Currently, the t(11;14) and cyclin D1 overexpression and SOX11 expression in cyclin D1–negative cases have assumed importance equal to traditional criteria. Their presence supports the diagnosis of MCL in cases with atypical histologic or immunophenotypic features.

Which of the following statements about in situ mantle cell neoplasia is/are correct?

Correct answer: D. All of the above.

Which of the following statements about immunophenotypic findings in MCL is correct?

Correct answer: E. Choices B and C. The cells are CD23-negative or weakly CD23-positive. In addition, the cells are usually positive for CD5, FMC7, and CD43.

MCL cells express relatively intense surface IgM/IgD, more frequently restricted to lambda than kappa. The cells are uniformly BCL2-positive; usually positive for CD5, FMC7, and CD43; sometimes positive for IRF4/MUM1; and negative for CD10 and BCL6. Nuclear cyclin D1 (BCL1) is expressed by more than 95% of patients with MCL, including the minority of cases that are CD5-negative. SOX11 is a transcription factor that is positive with the most sensitive monoclonal antibody in more than 90% of patients with MCL, including cyclin D1–negative and blastoid cases. Caution is advised because the specificity and sensitivity of SOX11 antibodies vary widely. The leukemic, non-nodal variant of MCL is more likely to be positive for CD23 or CD20 or negative for CD5. In summary, the typical immunophenotype is surface Ig-positive, CD5-positive, CD10-negative, CD19-positive, CD20-positive, CD23-negative, BCL6-negative, and CD43-positive.

DISCLOSURE: Dr. Abutalib has served on the advisory board for AstraZeneca. Dr. Medeiros reported no conflicts of interest.