The ASCO Post’s Integrative Oncology series is intended to facilitate the availability of evidence-based information on integrative and complementary therapies sometimes used by patients with cancer. In this article, Nirupa Raghunathan, MD, and Jyothirmai Gubili, MS, focus on the increasing use of cannabis by patients with cancer for symptom management and its potential therapeutic benefits as well as detrimental effects.

Cannabis is among the most widely used illicit and highly controversial agents due to its potential for abuse. Detrimental effects associated with its use include risk of addiction, serious adverse events, and withdrawal syndrome.

Cannabis preparations are obtained from the flowers, leaves, and resinous extract of the Cannabis sativa plant, which is cultivated around the world. These preparations are taken orally, by vaporizing or smoking. In addition, cannabis tinctures, teas, and oil-based extracts, which can be added to food products, are also popular. Active compounds of cannabis were identified as the cannabinoids delta-9-tetrahydrocannabinol (THC), the main psychoactive component; and cannabidiol (CBD), a nonpsychoactive compound.

Cannabis has been investigated for its potential therapeutic effects in patients with cancer, with systematic reviews reporting benefits against chemotherapy-induced nausea and vomiting.1,2 Two U.S. Food and Drug Administration (FDA)-approved synthetic cannabinoids, dronabinol and nabilone, are now recommended by ASCO for alleviating nausea and vomiting resistant to standard treatment.3 Dronabinol is also approved for the treatment of anorexia associated with weight loss in patients with AIDS.

Furthermore, data suggest the effectiveness of THC and nabiximols spray, a cannabis extract, for relieving pain4; and of dronabinol, for reducing paraneoplastic night sweats.5 But a clinical trial did not find any benefits with cannabis for improving cancer-related anorexia-cachexia syndrome.4

In addition to its utility in cancer symptom management, cannabis may have an impact on the disease as well. A cannabinoid resin extract was found to affect dose-dependent disease control in a patient with acute lymphoblastic leukemia.6 However, concurrent use of cannabis during immunotherapy with nivolumab has been correlated with an attenuated tumor response rate in patients with advanced melanoma, non–small cell lung cancer, and clear cell renal carcinoma.7 Data from a randomized study evaluating the effects of an oromucosal cannabis extract in patients with glioblastoma have yet to be published.8

In settings unrelated to cancer, an oral CBD solution was reported to be effective in reducing the frequency of seizures in patients with Lennox-Gastaut syndrome or Dravet syndrome, two rare types of epilepsy.9 Subsequently, the formulation was approved for use by the FDA in these patients and in those with tuberous sclerosis complex.10,11 Also, the American Academy of Neurology issued a Summary of Systematic Reviews for Clinicians highlighting the utility of cannabis in decreasing pain and spasticity associated with multiple sclerosis.12 However, definitive evidence is lacking to support the use of cannabis for addressing sleep disorders, Tourette syndrome, or loss of appetite.1 Whether cannabinoids can help treat symptoms of Parkinson’s and Huntington’s diseases, dyskinesia, irritable bowel syndrome, and addiction also remains unclear.13 Studies to assess their benefits against chronic, non–cancer-related pain produced mixed results.14,15

Given the emerging data as well as the potential for abuse and addiction, further research is needed to fully understand the therapeutic potential of cannabis13 and to inform medical cannabis policy.

Chronic bronchitis has been associated with the regular use of cannabis products.17

There is a risk of addiction with the use of cannabis.18,19

Cannabis use can elevate the risk of rare but life-threatening cardiac dysrhythmia,20 acute coronary syndrome, and chronic cardiovascular disease.21

Physicians should be aware of the growing patient interest in cannabis products, the adverse effects associated with their use, and the risk of addiction.

Cytochrome P450 Substrates: Smoking cannabis has been shown to induce CYP1A2, with additive effects when it is smoked together with tobacco, and may affect the intracellular concentration of drugs metabolized by this enzyme.26

Cytochrome P450 Substrates: CBD strongly inhibits CYP2C1927 and CYP2C928 in vitro. Clinical significance of this effect is not known.

Immunotherapy (Nivolumab): In an observational study, concurrent use with cannabis has been associated with a decrease in treatment response rates in cases of advanced melanoma, non–small cell lung cancer, and clear cell renal carcinoma.7,29

Fluoxetine: Mania has been reported following co-administration with cannabis.31

Disulfiram: Delirium and hypomania were reported after simultaneous administration with cannabis.32,33 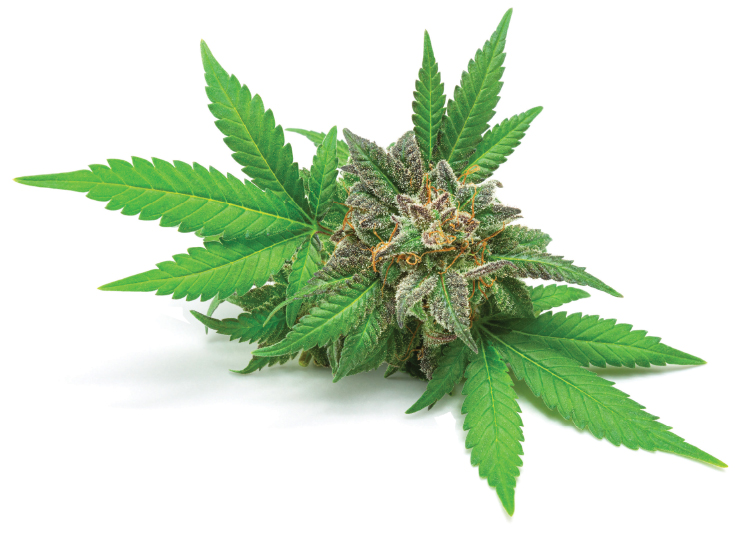 Amphetamines, Cocaine, Atropine, and Sympathomimetic Agents: Cardiotoxicity has occurred with cannabis via additive hypertension and tachycardia.34,35

Sedatives or Hypnotics: Sedation and significant pharmacodynamic interactions may occur when taken with cannabis through the potentiation of central effects.36

Clobazam: CBD was found to increase clobazam levels in children with epilepsy.38

Although highly controversial, cannabis has been legalized in 36 states and Washington, DC, for medicinal use, with 16 states and DC also approving its recreational use. Many clinicians are asked questions about medical cannabis, and studies have showed that a majority of providers believe cannabis can be helpful for medical symptoms, but they also are often unprepared to answer questions about its use.39,40 Continued study and informed providers are needed to support appropriate counseling and use of cannabis.

12. American Academy of Neurology: Efficacy and safety of the therapeutic use of medical marijuana (cannabis) in selected neurologic disorders. 2014. Available at www.aan.com/Guidelines/home/GetGuidelineContent/651. Accessed April 20, 2021.

13. Abrams DI: The therapeutic effects of Cannabis and cannabinoids: An update from the National Academies of Sciences, Engineering and Medicine report. Eur J Intern Med 49:7-11, 2018.