Yoga for Pediatric and Adolescent Patients With Cancer

The ASCO Post’s Integrative Oncology series is intended to facilitate the availability of evidence-based information on integrative and complementary therapies sometimes used by patients with cancer.

Despite significant improvements reported in survival rates, symptom management in pediatric patients continues to be challenging. Growing evidence suggests the benefits of complementary modalities, such as yoga, for alleviating symptoms associated with cancer and its treatments. In this article, Nirupa Raghunathan, MD, summarizes the available data on yoga in the care of younger patients with cancer.

Yoga is a mind-body practice that has its roots in the Indian subcontinent; it links breath to form, leading practitioners through physical poses in series with associated breath work. Postural alignment along with engaging the extremities raises somatic self-awareness. By educating the user in achieving balance and calm in the body, yoga can also increase awareness of problematic symptoms and aid in managing them.1

Studies of Yoga for Children and Young Adults With Cancer

There is growing evidence for the use of mind-body therapies, such as meditation and yoga, for cancer treatment–related symptoms such as
fatigue, insomnia, anxiety, and depression in adults.2-5 Research suggests the practice of yoga has grown substantially for both children and adults, with Centers for Disease Control and Prevention reports showing use of yoga in children growing from 3.1% to 8.4%.6 This increase in use and interest has led to investigations of yoga’s potential benefits in pediatric oncology.

Small trials in pediatric and adolescent patients have shown yoga to be effective in alleviating fatigue and pain as well as for improving quality of life. A pilot study of cancer survivors, between the ages of 10 and 17, reported significant reductions in anxiety.7 Another study involving young adult survivors showed that yoga decreased fatigue as well as improved social functioning and somatization.8 Yoga also yielded significant improvements in quality of life, functional mobility, and physical activity levels in active patients as well as their parents.9

Additional studies have evaluated yoga for its effects on attention deficit hyperactivity disorder, irritable bowel syndrome, asthma, and cognition, in settings including in-school as well as inpatient programs. In preschool-aged children, a 6-week yoga intervention produced modest improvements in objective measures of attention and parent ratings in behaviors.10

Furthermore, engaging the mind, attending to comfort, and performing deep relaxed abdominal breathing were found to reduce gastrointestinal symptoms in teenagers by disrupting chronic patterns of functional disability and maladaptive coping strategies, often experienced by patients with irritable bowel syndrome.11 Also, in children with exercise-induced bronchospasm, yoga training prior to exercise improved forced expiratory volume and decreased the incidence of bronchospasm, following an exercise challenge.12 In a group of school children from disadvantaged backgrounds, a 3-month school-based yoga intervention was reported to be similar to physical activity in improving cognition in areas such as arithmetic and coding.13 These data point to the potential areas of further study in pediatric and adolescent patients with cancer.

Investigations into the mechanisms of yoga’s effectiveness have indicated pathways that include neurobiology, hormone modulation, and immune functionality. Studies have shown that meditation increases blood flow to the brain, increasing endogenous dopamine and gamma aminobutyric acid.14,15 There also appears to be regulation of the autonomic nervous system through an increase in parasympathetic activity. Changes associated with recruitment of the insula, amygdala, and hippocampus appear to increase pain tolerance and decrease anxiety and distress associated with pain.16 Brain-derived neurotrophic factor, implicated in neuroplasticity and modulating stress response, has also been reported to be increased with yoga.17

Further research into stress response modulation indicates that yoga can affect cortisol levels. In a study of patients with breast cancer, Hatha yoga practice affected reductions in the levels of both morning and afternoon cortisol2; lower cortisol levels have been associated with decreased anxiety, depression, and perceived stress.18 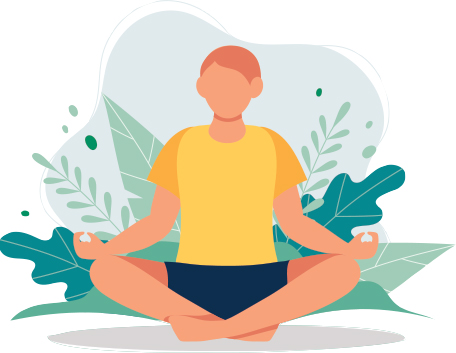 Because of the physical nature of yoga practice, injury is the most likely adverse effect. However, data show that yoga is quite safe, with an average of 0.6 injuries per 1,000 hours of practice. The most common injuries were associated with handstands, shoulderstands, and headstands. Power yoga is also correlated with a high rate of injury, with 1.5 injuries per 1,000 hours of practice. Of note, the risk of chronic adverse effects was higher in subjects with chronic illnesses and in those practicing through self-study.20 This indicates a strong need for supervised practice with a yoga teacher with specific training in cancer settings. Furthermore, understanding pediatric behavior and anatomy plays an important role in the implementation of yoga practice in children.

In the pediatric oncology population, yoga taught by an experienced teacher can be beneficial for supportive care. Yoga has been studied for more than 30 years to aid in symptom management, with many early studies conducted in India.1 Although the evidence base has been growing, there remain challenges that include heterogeneity of the interventions, varied outcomes measures, and small sample sizes. Larger, well-designed studies are needed to determine the specifics of interventions and dosing for various symptoms, as well as the mechanisms in the pediatric population.

16. Rivest-Gadbois E, Boudrias MH: What are the known effects of yoga on the brain in relation to motor performances, body awareness and pain? A narrative review. Complement Ther Med 44:129-142, 2019.