The ASCO Post is pleased to reproduce installments of the Art of Oncology as published previously in the Journal of Clinical Oncology. These articles focus on the experience of suffering from cancer or of caring for people diagnosed with cancer, and they include narratives, topical essays, historical vignettes, poems, and photographic essays. To read more, visit ascopubs.org/journal/jco.

I will remember her as Liz, though, of course, that was not her name. She was the sort who might have run half-marathons, kept dogs, or gone camping for fun. Her real name was actually quite flowery and regal, but, in her pragmatic way, she had shortened it to a title befitting her directness.

I first met her in the spring. By any account, it was a nice day outside. The sky was cloudless, and the breeze carried the scent of old gardens. But our first consultation had been under fluorescent lights in a windowless surgical clinic.

When I was called down to discuss chemotherapy with her, I had perched on the corner of the desk—half sitting and half standing—while the senior surgeon wrote his notes. He had already examined the tangerine-sized breast mass and the lymph nodes hiding deceitfully in her armpit. At some stage, I noted her familiar attire, the uniform of our own hospital staff, the ID badge. Her husband sat alongside her, broad-shouldered yet powerless.

“We will give the chemo upfront. This is a triple-negative breast cancer, so, all going well, the tumor should shrink, touch wood,” and I tapped the polyurethane desktop.

The expected questions followed. Somehow husband and wife found a way to return a few joking comments in between the usual discussions around hair loss and blood counts and the oddly profane acronym we used for her chemotherapy regimen. I gently navigated the finality of childlessness as she answered for them both, “No, we don’t want children.”

She had taken the diagnosis in her stride, it seemed. I knowingly predicted the tears would come, as they always do, perhaps at the end of treatment, although they came sooner. But as the weeks went by, she kept working and running. In a symbolic act of defiance, she refused to cover her baldness.

The worst day came without warning. I was standing by the elevator when the peloton hurried past in scrubs, dragging a resuscitation pack.

“Somebody’s collapsed downstairs in the offices,” I heard someone say. I guess when you hear there is a medical emergency in a nonclinical area, you hope and assume it is a simple faint. Yet, for some reason, I followed the group and started to run. 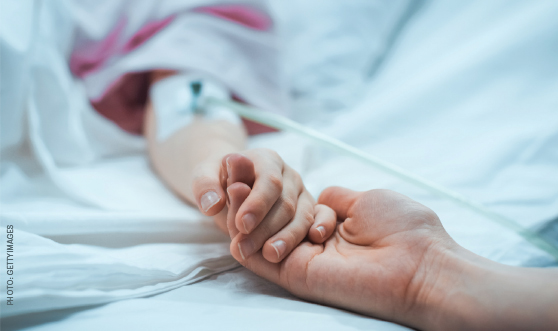 Liz was half-conscious, lying on the floor between the rows of those ubiquitous gray workstations they have in open-plan offices. The team already had her shirt off. Now she was clothed in a tangle of wires and defibrillation pads, while the detritus of medical disposables littered the floor. The electrocardiogram trace was indecisive. A trolley appeared, and we lifted. We ran her to emergency, down low-ceilinged corridors. Our steps fell into uneasy unison as the beeping monitor kept time.

“Someone run ahead and hold the elevator.”

I stood in the corner of the resus bay and repeated the history. “Early breast cancer—curative intent—chemo—only three—a collapse—one of our own—she is not supposed to die.” Not like this.

The emergency team performed their well-rehearsed ballet. Through the gap in the curtains, I could see the waving of arms—my colleagues trying to save her. I saw the endotracheal tube, the Seldinger wires, and the involuntary flinch of defibrillation. A kindly nurse suggested that someone take that distressed relative over there to one of the counseling rooms. “That’s not a relative. That’s her oncologist,” came the reply.

Liz was taken to intensive care, and I went to wait for her husband to arrive. I stood at the
front entrance of the old hospital, where the words faith, hope, and charity were carved into its stone façade.

How would I explain this to him? I had carried a perverse want that she was septic or there had been a pulmonary embolism—something reversible, some twist of bad luck. But her heart was barely moving. Perhaps this was viral myocarditis or some blameless other reality?

The chemotherapy order had been checked and rechecked. Had I made a mistake? The handwriting was legible but not the elegant cursive of my youth. Decades of doctoring had forced evolution to a script that was efficient but ugly. Still, the order and the doses given were correct.

She’d had nowhere near a cardiotoxic dose of chemotherapy. No, it couldn’t be that. Until eventually, it could no longer be anything else.

“We aren’t sure yet, but we think the chemotherapy has damaged the heart. I am so sorry,” I had said when the time came.

I saw the flicker of disbelief and confusion cross her husband’s face. She had been well enough to go to work that morning. Perhaps not her usual self for a few days, he had said. Now she was on life support? Then as it all began to sink in, I saw his face twist in agony, saw this bear of a man crumble, the beating of fists on the floor.

I thought of the nameless colleague, who in another time and place had felt the same eviscerating dread, watching a young, healthy trial patient lie dying. Perhaps he had also sat with a distraught family in a tiny room and had the same awful conversation. And yet, how bland and unthreatening those little rows of text in the medical journals had seemed.1,2 How he’d sat so neatly in a small font near the bottom of the toxicity tables—cardiac death: 0.1% or thereabouts; just a handful of patients. Rare. Unlikely.

We Dared to Hope

For weeks I visited Liz in intensive care. All I could do was peer in at her bed space. In the evening gloom, her frame would shrink into the darkness, leaving a cityscape of blinking lights and monitors. The ventilator and dialysis machines whirred and clicked.

“Please tell me she will recover,” I asked the intensivists, as much for myself as for Liz. Their eyes were kind and empathetic, but their answers were guarded. They would walk alongside me and try their very best. But the burden of blame I would shoulder alone.

Then by some miracle, Liz awoke cognitively intact. The tube prevented speech, but her husband had made her a Ouija board of phrases and letters. On the ward round, I explained to Liz what had happened. She pointed to a tile on her board. “Thank you.” And then another, “I love you.” My fellow began to sob. “The intensive care team tells me you are getting better,” I said. She gave a thumbs-up.

As the weeks passed, she kept improving, and we dared to hope. The breast cancer had disappeared—good news. I noted the inotropes decreasing and nodded in assent. But there was little more I could add beyond visiting and waiting.

She managed to leave the intensive care unit, kidneys and heart slowly improving over a summer spent in the hospital. And then one day, I arrived at work to be told she had died overnight. In the end, the damage had been too great to overcome. It had been 3 months.

There was a lovely memorial service at the hospital, a photographic montage, clapping, laughter, and a favorite song. But I stood at the back, unable to escape the wrench of responsibility. There had been no malice or intent, no mistake or neglect. Yet with a few scratchings of ink, it was I who had signed her chemotherapy order.

Not Immune to Treatment-Related Death

For a while, sympathetic colleagues would, in moments of private conversation, avert their eyes toward their shoes and confess quietly, “Yes, I had a patient die from docetaxel.” For others, it was bleomycin, or fluorouracil, or a secondary leukemia. As a junior, I had been told that these things eventually happen to every oncologist, if you treat enough patients. Why, despite routinely warning others of the risk of treatment-related death, had I somehow considered myself immune? To bring about the death of another person was unthinkable, its heft unbearable.

A couple of weeks before she died, Liz reached up from her bed, took my hand, and in a singular act of grace said, “I know you are upset. It’s not your fault.” I had looked at her with tears streaming, humbled by her forgiveness and compassion, and wondering if I would have displayed such strength and dignity had our roles been reversed.

All of our patients touch us—it is part of the privilege of being a doctor. But it is difficult to remain objective after the trauma of an adverse patient outcome. We remember our failures with disproportionate clarity and diminish the significance of our unmeasured successes.

We recall so clearly the patients who relapse unexpectedly and those who suffer rare catastrophic complications, fearing numbers and percentages we can count on one hand. This is the particular bind of decision-making around adjuvant and neoadjuvant therapies.

Another Clear and Frightening Decision

My colleagues were amazing. They gave me the time I needed. But it was not long before there was a new patient to meet, a woman with high-risk, early breast cancer. I went through her pathology report. She was otherwise well; her examination and bloods were good. The decision was at once clear and frightening.

I explained the benefits, and the risks, leaning on the clinical trial information like it was an old friend. She left the room clutching her papers and appointment slips. Our clinic nurse followed, ready to offer solace and advice.

As the door closed behind her, I hesitated for a moment before locating the chemotherapy chart. I checked the recorded height and weight and calculated the doses. I picked up my pen and began to write. I double-checked the numbers, the patient details, and the date.

And then, carefully, I signed my name.

Acknowledgment: The author gratefully acknowledges the patient’s husband for review and approval of the manuscript.

At the time this article was published in the Journal of Oncology, Dr. McNeil was working at Chris O’Brien Lifehouse, Camperdown, New South Wales, Australia.