Robert O. Hickman, MD, a pediatric nephrologist and inventor of a catheter that revolutionized care for patients with cancer, died on April 4, 2019. He was 92.

Dr. Hickman was born on September 27, 1926, in Monticello, Utah. He served in the U.S. Air Force in the mid-1940s and married Lucy Jean Whitesides before going on to receive his medical degree from the University of Maryland School of Medicine. He performed his residency training in pediatrics at the University of Washington, Seattle, during which time he was involved in placing the first placement of a child on both long-term hemodialysis and home hemodialysis. 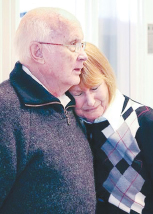 In the 1970s, Dr. Hickman was a founding member of the transplant team at Fred Hutchinson Cancer Research Center (Fred Hutch) in Seattle that pioneered the bone marrow transplant procedure. The Hickman catheter “was a gift to the world,” said Fred Appelbaum, MD, Executive Vice President and Deputy Director of Fred Hutch, who worked with Dr. Hickman. The device enabled patients with cancer to receive nutrition and chemotherapy intravenously, avoiding the need for repeated needle sticks in an effort to find a vein. “People make contributions in lots of ways,” he said. “Some have deep scientific insights that uncover DNA or how viruses work. Bob’s contribution, from a scientific standpoint, was relatively simple. But his invention saved more suffering, anxiety, and pain than almost anyone I can imagine,” Dr. Appelbaum said.

Dr. Hickman is also remembered by his colleagues for his kindness and compassion, and by his patients for his singular devotion to them, especially the children.

Dr. Hickman is preceded in death by his beloved wife Lucy, his daughter Mary, and his grandchildren Madalyn and Tyler. He is survived by 5 children and their spouses, 17 grandchildren, and 40 great-grandchildren. ■