A History of Medical Care for the Dying 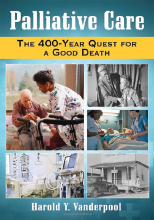 Title: Palliative Care: The 400-Year Quest for a Good Death

In 2006, palliative care became a board-certified subspecialty of internal medicine, with specialized fellowships for physicians interested in the field. Despite its formal integration into best practices medical care, about 70% of Americans describe themselves as “not at all knowledgeable” about palliative care, and the perception that palliative care is synonymous with end-of-life care still lingers. While palliative care should be initiated early in the management of cancer, it is also an essential part of the multidisciplinary care needed to ensure as peaceful a death as possible.

Since 2006 (and before), many books have been written about palliative care, from the clinical to the spiritual. Until now, however, a book exploring the long and interesting history of palliative care has not been published. That void has been filled by a scholarly work by Harold Y. Vanderpool, PhD, in a book titled Palliative Care: The 400-Year Quest for a Good Death.

Dr. Vanderpool, Professor Emeritus of History and Philosophy of Medicine in The Institute for the Medical Humanities at the University of Texas Medical Branch in Galveston, has taught and published numerous articles on medical ethics, death and dying, and suffering. Why the historical narrative of palliative care has been overlooked isn’t clear, but lacking a common term for this approach to symptom management throughout the centuries is one reason.

In his preface, Dr. Vanderpool notes that no study has identified how palliative care originated more than 400 years ago and has continued to today. He writes, “The story of medically assisted palliative care began in 1605, when Sir Francis Bacon challenged physicians to accept the new responsibility of easing the pangs of dying persons so they could expire with greater tranquility.”

For a work of scholarship, Palliative Care is a small book—just north of 200 pages, with 60 additional pages for meticulous notes, bibliography, and index. Readers who may shy away, fearing a scholarly work will lull them to sleep, should give this one a chance. It is fascinating medical and social history, written in accessible prose.

Organized in nine chapters and well-structured subchapters, the book takes the reader from Francis Bacon’s initial 1605 proclamation that “physicians should enable persons to pass peacefully out of life,” which became a standard feature of medical care, to 1770, when Scottish physician and moralist John Gregory, MD, divided the practice of medicine into four parts: preserving health, prolonging life, curing diseases, and making death easy. In fairness to the giant who got the ball rolling, Dr. Vanderpool notes that of Dr. Gregory’s four parts, three were drawn from Francis Bacon’s work.

As Dr. Vanderpool’s historical narrative arrives in the 19th century, the reader can begin connecting the medical dots to current practice, and in doing so, it becomes clear how medicine has struggled with the best way to care for the terminally ill. For instance, the first code of ethics of the American Medical Association was adopted in 1847, and it remained as the official statement of professional ethics until it was revised in 1903.

In this section the reader is treated to several iterations by esteemed doctors of the time, wrestling with how to best communicate bad news to their patients, many who believe that “hope is sometimes life-saving.” An excerpt from Medical Ethics, published by Thomas Percival, MD, in 1803, describes a tentative approach to having the “hard conversation” that many of today’s oncologists still struggle with:

A physician should not be forward to make gloomy prognostications…. But he should not fail, on proper occasions, to give to the friends of the patient timely notice of danger when it occurs, and even to the patient himself, if absolutely necessary. This office, however, is so peculiarly alarming when executed by [the physician] that it ought to be declined whenever it can be assigned to any other person of sufficient judgment and delicacy.

According to the author, clashing convictions over concealing or revealing the truth about terminal illness are evident from Francis Bacon in 1605 all the way to the 20th century, when a revolution in favor of physician truth-telling took place. In 1961, an article in JAMA reported that 90% of physicians had a strong tendency to conceal a cancer diagnosis.1 The author then fast-forwards to a 1979 JAMA article reporting that 98% of physicians surveyed did not hesitate to reveal a cancer diagnosis.

During this transformative period, the patients’ rights movement began, and death with dignity became a mantra added into the lexicon of medicine. That phrase had—and continues to have—staying power. It was also a time when momentous changes in the law were reported in the medical literature, and the moral and legal essentials of palliative care were being laid out.

As the reader will see, the years from 1960 through 1981 were full of tension, complexity, creativity, and change. It’s valuable medical history. And the doctors who were on the forefront of these changes were true medical heroes, because “increasing numbers of terminally ill patients were being rescued from institutionalized loneliness, neglect, and powerlessness in hospitals.”

The final chapters of this fine book deal with issues like physician-assisted suicide and the emergence of the palliative care movement. It’s all good content, but there’s nothing really new here for The ASCO Post readers. The most interesting part of Dr. Vanderpool’s book is the thorough history from the 1950s through 1981, when pioneering doctors collaborated to define the medical, moral, and legal changes that reshaped care for our most vulnerable patients.

This history of palliative care also makes it clear that becoming a doctor is a calling. This book is highly recommended for The ASCO Post readers who enjoy history. ■