Bombarded With Changes in Health Care and Beyond, Gynecologic Oncologists Prepare for the Challenges Ahead 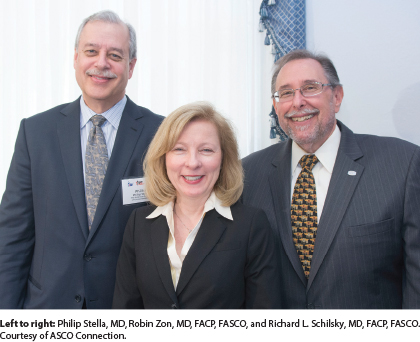 Perhaps most important is the need to provide affordable care to all segments of the population, as disparities clearly still exist in the United States of America.

The days of the 1,500-patient randomized trial are over. The way that clinical trials for advanced and recurrent disease are heading is toward basket trials, with a focus on precision medicine and targeted therapy.

Physicians are being “bombarded” with changes in health care and beyond, Richard R. Barakat, MD, FACS, noted in his Presidential Address at the Society of Gynecologic Oncology (SGO) Annual Meeting on Women’s Cancer. These changes are being precipitated by steeply rising health-care costs amid federal funding cuts, restructuring of clinical trials, and targeted therapies that pack power but also have “significant and profound” toxicities.

“What is the impact of these changes in health care on the practice of gynecologic oncology and how well positioned are we as individuals and as a society to meet these challenges head on?” Dr. Barakat outlined the challenges and what SGO is doing to meet them. “Paramount and perhaps most important is the need to provide affordable care to all segments of the population, as disparities clearly still exist in the United States of America,” he said.

The SGO Annual Meeting on Women’s Cancer drew 2,064 participants, including 952 gynecologic oncologists, 169 fellows-in-training, 137 residents, and 72 medical oncologists, as well as other physicians and allied health-care practitioners. During the meeting in Chicago, the SGO surpassed its 2,000-member milestone for the first time.

“Administration of these drugs is no easy task. If you look at the toxicities that occur, they differ from standard cytotoxic chemotherapy,” Dr. Barakat said. Citing a trial with ipilimumab ­(Yervoy), he noted that at the initial dose of 10 mg/ kg, 25% of patients had grade 3 or 4 toxicities. “They are rolling toxicities that occur at various time points—skin rash at 2 to 3 weeks, gastrointestinal/hepatotoxicity at 6 to 7 weeks,” Dr. Barakat said.

But they are not the usual toxicities expected with chemotherapy. “The gastrointestinal toxicity that occurs with this agent can be severe. These side effects are significant. They are powerful drugs.”

In an interview with The ASCO Post, Dr. Barakat said that oncologists “have got to learn what it means to give these drugs” and to function as both an oncologist and an internist in managing toxicities. Patients will need to go to physicians “who are qualified to handle these agents.”

“One of the most important tools available to inform physicians, hospital administrators, industry insurers, and women’s cancer care teams about the current, present, and future state of gynecologic oncology is the 2015 SGO member practice survey,” Dr. Barakat said. He presented “a snapshot” of the results.

Overall, 462 SGO members responded to the survey, a response rate of 45% of the membership at the time of the survey. That level of response “is unheard of in a professional society and shows the commitment of the members of this society to our specialty,” Dr. Barakat said.

“There is a steady decline in the number of gynecologic oncologists who consider themselves to be in solo practice to just 9% in the 2015 survey,” Dr. Barakat said. “It is going to be very rare to find solo practitioners.”

“There is a corresponding increase in respondents who either work with a group practice or belong to a multispecialty practice or clinic,” he continued. Although “almost one-quarter” of respondents reported being with a practice that is part of or associated with an accountable care organization, “amazingly, 31% of us did not even know if our practice was associated with an accountable care organization. If you don’t know, you need to know,” Dr. Barakat said.

“Just 16% of gynecologic oncologists” responding to the SGO survey “indicated their practice or hospital had bundled payment arrangements with private insurance companies last year for professional services, whereas 50% did not know. You cannot not know,” Dr. Barakat stressed. “This will affect you. It will affect your bottom line. As a society, this indicates to me that we need to start focusing on these issues, because they are here; they are now; they are real.”

The issue of bundled payments is one of the priority issues being considered by the SGO’s Task Force on Physician Payment Reform. “Research has shown that bundled payments can provide incentives for providers, including hospitals, physicians, and post-care providers, allowing them to work closer together across all specialties,” Dr. Barakat noted.

“As part of a broader federal push to reward hospitals and doctors for value, rather than volume, of the services they provide,” the Centers for Medicare and Medicaid Services (CMS) “is inviting oncology practices and solo practitioners to join a 5-year test set to begin in the spring of 2016,” Dr. Barakat said. SGO has developed a new alternative payment model for endometrial cancer patients, Dr. Barakat reported. “This is our first foray into bundled payments.”

“Almost one-half of the members who answered the survey indicated that the number of clinical trials in which they participate has decreased over the past 5 years. On the other hand, one-quarter said that the number of trials in which they participate has increased,” Dr. Barakat said. “Many of those who answered reported that the changes in the National Cancer Institute (NCI) structure had led to a downsizing in their clinical trials infrastructure.”

The transformation of the NCI’s “long-standing cooperative group program into the new National Clinical Trials Network was based on the 2010 Institute of Medicine (IOM) report on the need for reinvigorating the NCI cooperative group mechanism,” Dr. Barakat noted. “The recommendations and feedback from the IOM and others emphasized the need for a more efficient and streamlined system that could more rapidly respond to scientific opportunities.” Describing frustrations with trying to open trials under the previous program, Dr. Barakat said, “I understand the need for being more nimble in getting trials open.”

“The program that emerged from this restructuring, the National Clinical Trials Network, has a different focus than its predecessors. Efficiency is stressed and mandatory time lines are now in place for protocol development,” Dr. Barakat added. The National Clinical Trials Network is “organized to take maximum advantage of the opportunities afforded by the improved understanding of tumor biology, as well the improved efficiencies created by the centralization and streamlining of many critical functions.”

In addition to restructuring, decreases in funding for NCI “over the past decade, have taken a toll on clinical trials,” Dr. Barakat noted. “Money has been “channeled into 30 sites that receive the lead academic participating grants, which are given mostly to NCI-designated cancer centers that accrue large numbers of patients, with the funding effectively raising the per patient reimbursement level to help support the research staff required to manage this effort,” Dr. Barakat said.

“This is an important issue for our members. Our members feel these changes and want something done about them. Eighty percent of our members who responded believe that SGO should advocate for increased clinical trials availability for its members,” Dr. Barakat related.

“Ultimately, clinical trials drive the field forward,” Dr. Barakat observed. “It is the groundbreaking discoveries of the Gynecologic Oncology Group that helped position us where we are today, and that needs to continue under the new system.”

“The types of trials, however, that we will be participating in are changing,” Dr. Barakat noted. “In 2014, the NCI launched a pilot study, the M-PACT trial, to assess whether assigning cancer patients treatment based on the genetic characteristics of their disease can improve outcomes for patients with advanced metastatic solid tumors.” This is one of the first trials “to use a randomized design to assign treatment based on specific mutations, and the results are due in 2017,” Dr. Barakat said.

“Trials will no longer focus exclusively on disease sites but rather on mutational profiles and the presence of actual targets,” Dr. Barakat noted. For example, he cited a trial at Memorial Sloan Kettering Cancer Center with vemurafenib (Zelboraf). “It’s a basket trial where we looked for mutations in the BRAF V600 gene across tumor sites, across lung cancer, ovarian cancer, colon cancer, etc, and patients are entered into the trial based on mutational status, not their disease site.”

“This had to come,” Dr. Barakat told The ASCO Post, because the days of the 1,500-patient randomized trial are over. The way that clinical trials for advanced and recurrent disease  are heading is toward  basket trials with a focus on  precision medicine and targeted therapy. It is all about precision medicine and targeted therapy.” Dr. Barakat said.

Extending Results Into the Community

Doing so requires collaborative partnerships. “That is what we are doing at Memorial Sloan Kettering,” as well as at other institutions, such as MD Anderson Cancer Center in Houston, Dr. Barakat said. As Deputy Physician-in-Chief for the Memorial Sloan Kettering Regional Care Network and Cancer Alliance, Dr. Barakat is working to set up partnerships with community cancer centers. “We have to maintain the identity of those community cancer centers,” he said, while helping them “assure coordinated cancer care for all of their patients and support the structure of multidisciplinary teams at each hospital across the entire system. Ultimately, we have to enhance access to cutting-edge clinical trials in the community.”

The Cancer Alliance has already established a relationship with Hartford HealthCare Cancer Institute, a five-hospital system in Connecticut. “It’s been a fantastic experience,” Dr. Barakat said. “We are in the process of opening MSK clinical trials at the Hartford HealthCare Cancer Institute.” (Dr. Barakat described the Cancer Alliance in detail in an article published in the November 1, 2014, issue of The ASCO Post.)

Another important initiative is the SGO Clinical Outcomes Registry. Twenty sites, with more than 1,600 patients, have already enrolled, “and these sites will provide a standardized format for collection of clinical data in the areas of ovarian, endometrial, and cervical cancers,” Dr. Barakat said. “The registry provides members with an effective tool to measure quality improvement and clinical outcomes research. Members who participate in the registry will be able to compare their individual physician or institution’s data with regional or national benchmarks, which will help identify areas for quality ­improvement.”

“The ultimate goal of the SGO Clinical Outcomes Registry is the submission of performance measures to the National Quality Forum for endorsement as a CMS-approved registry for submission of Physician Quality Reporting System measures,” Dr. Barakat said. “I think it is critical that we do this.”

The reorganization of the SGO’s government relations functions “will bring SGO priorities into sharper focus,” Dr. Barakat said. “You can expect more grassroot initiatives, with members encouraged to contact congressional representatives and policy makers. When you get those blast e-mails, do me a favor,” he implored. “Take 5 minutes out of your time and respond. Send out those notices to your representatives. It makes a difference. In Washington, clearly numbers count.” ■

Overall Survival With the Addition of Daratumumab to VMP in Newly Diagnosed, Transplant-Ineligible Multiple Myeloma