Quality of Life Is What’s Most Important to Me

After giving birth to my third child, my gynecologist recommended that I have it removed, but I was too embarrassed to have the procedure and I didn’t think the skin tag presented any real threat to my health. Over the next few years, however, the growth became more uncomfortable and I began to feel more and more fatigued, although I never related being tired to the tumor. 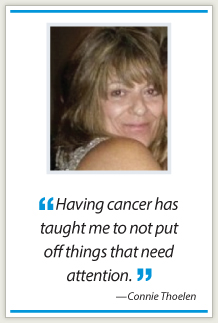 My oncologist recommended that a colostomy be done so he could remove the entire tumor. Although there was a possibility the colostomy would only have to be in place temporarily, I refused to have any part of it.

Even though I understood the seriousness of my situation, I made the decision to take a chance that my cancer hadn’t spread beyond the lymph nodes excised during surgery. And I’m grateful that my doctors respected my wishes and didn’t pressure me into acquiescing to more aggressive therapy. Instead, I had three cycles of continuous-infusion fluorouracil for 5 days each cycle, followed by 62 doses of radiation therapy, which eliminated the remaining tumor.

Although the treatments affected my digestive and bowel systems and threw me into early menopause, I’ve been fortunate that over the past 9 years, my follow-up biopsies have been clear and there is no sign of cancer recurrence. However, what I knew from the beginning—and I feel the same way now—is that if my cancer had been more widespread, requiring more aggressive and radical treatment, even though it might have potentially given me a few more years, I wouldn’t have agreed to it if that meant sacrificing my quality of life. At the time of my diagnosis, I had three small children and a young husband, and I didn’t want to put them through what could have been years of seeing me suffer from this disease.

When I got my cancer diagnosis, I didn’t feel angry or ask, “Why me?” I didn’t fear death or worry about making the crucial decisions regarding my treatment. I didn’t go through any of that emotional upheaval. But what having cancer has taught me is to not put off things that need attention. My doctor told me that if I had waited 6 more months before seeking treatment, instead of getting well, I would have been preparing my family for my death. And that was an eye-opener for me, because life would have dramatically changed for everyone. I’m glad my family was spared that pain. ■