As introduced in our report on page 1 of this issue, counterfeit pharmaceuticals are an increasingly important safety concern, and three of the most prominent drug-counterfeiting episodes in recent years have involved hematology/oncology products.

Helen B., a 61-year-old woman with recurrent breast cancer, received erythropoietin, 40,000 units weekly for 8 weeks, which was initiated to treat chemotherapy-induced anemia.1 Despite the erythropoietin therapy, her anemia became more severe. Her nurse had recently read a Dear Healthcare Professional letter, describing 40,000-unit vials of counterfeit erythropoietin confiscated from several regional distributors. The nurse noted that the lot number on the patient’s vial was the same as the lot number reported in the Letter, and typing imperfections matched those also described in the Warning Letter. Shortly thereafter, the patient’s breast cancer became more aggressive, and she died from the disease. Testing by the manufacturer revealed that the vials contained 2,000 units of erythropoietin instead of the purported 40,000 units—so-called “uplabeled” vials.

Subsequent investigation revealed that 110,000 vials of uplabeled erythropoietin had been distributed throughout the United States (Fig. 1). Criminal investigations revealed that the uplabeled erythropoietin had been sourced from a small pharmacy in Miami Beach. Counterfeiters had replaced “2,000-unit” vial labels with counterfeit “40,000-unit” vial labels and then sold relabeled product to wholesalers throughout the country. These wholesalers sold the product to other wholesalers, who sold it to national pharmaceutical distributors, who sold it to pharmacies nationwide. Counterfeit labels were identified by their lot numbers and printing mistakes. Of note, the FDA received reports of only 6 of an estimated 20,000 or more patients who may have received uplabeled erythropoietin. 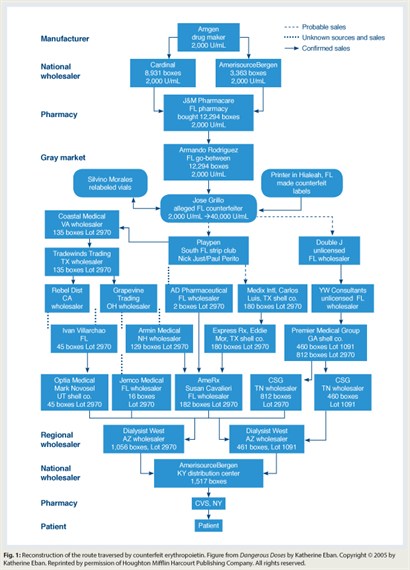 In 2008, the FDA received reports of 81 deaths and 785 severe allergic reactions among renal dialysis patients shortly after undergoing a hemodialysis session. An additional 68 deaths following dialysis procedures were reported in countries outside the United States during the same period. Initial concerns about these reactions had been reported by dialysis workers at a pediatric clinic in Missouri. Following initiation of a dialysis session, facial edema, tachycardia, hypotension, urticaria, and nausea had developed in eight children undergoing hemodialysis. Case-finding by the Centers for Disease Control and Prevention identified similar clusters in other states, including patients undergoing photopheresis or treatment for cardiac conditions. A common feature was receipt of heparin produced by Baxter Healthcare.2

In January 2008, nine lots of vials of heparin manufactured by Baxter were voluntarily recalled. A more extensive recall of heparin products occurred in February 2008. Although initial evaluation failed to identify any impurity, subsequent evaluation revealed that the heparin was contaminated with oversulfated chondroitin sulfate. Additional investigations indicated that contaminated heparin had been distributed in Australia, Canada, China, Denmark, France, Germany, Italy, Japan, the Netherlands, New Zealand, and the United States from product made using active pharmaceutical ingredient obtained from 14 Chinese suppliers.

Investigation revealed that a large percentage of the heparin supplied by Baxter (the supplier of 50% of the domestic heparin supply at that time) was contaminated with oversulfated chondroitin sulfate. Contaminated product was produced from active ingredient supplied by companies (“consolidators”) that processed heparin from pig intestines in small unregulated workshops in China. The other major supplier of heparin produced heparin from pig intestines provided by farmers whose work sites had been evaluated for quality by the manufacturer. After contamination of the Baxter product was discovered, FDA assisted the other supplier in becoming the sole supplier of domestic heparin. This case readily underlines the difficulty in regulating pharmaceutical manufacturing in a global marketplace.

In 2010, bevacizumab (Avastin) was administered intravitreally at Shanghai Number 1 Hospital to 116 patients for treatment of macular degeneration.3 Three vials of bevacizumab were the source of product for the patients. Testing by the manufacturer and an independent laboratory in Shanghai confirmed that the vials did not contain active pharmaceutical ingredient.

FDA and regulatory authorities in Europe hypothesized that counterfeit bevacizumab originated in China or India and was sold to pharmaceutical wholesalers in Turkey and Syria, then to a wholesaler in Egypt, and then on to a Swiss wholesaler. A Danish wholesaler purchased counterfeit vials from the Swiss wholesaler and shipped the product to a British wholesaler. A Canadian Internet pharmaceutical distributor (CanadaDrugs.com) purchased the counterfeit vials and sold these products to wholesalers in Tennessee and Montana—who, in turn, sold the product to the practices in California, Texas, and Chicago. Counterfeit labels contained misprints of vial lot numbers (not matching the lot numbers on the box) and included the Roche logo (rather than the Genentech logo).

The travel history of pharmaceuticals provided to patients in the United States can be remarkably complex. Regulatory agencies, policymakers, manufacturers, wholesalers, and pharmacies are adopting new strategies to ensure the safety of the supply chain. Most importantly—given that 80% of domestic active pharmaceutical ingredients originates from foreign suppliers—the FDA is devoting more resources to inspecting foreign pharmaceutical manufacturers. Clinicians should consider the possibility that counterfeit product has been used when evaluating patients who experience unexplained acute toxicity or loss of efficacy. Attention must be paid to this growing public health threat. ■

In 2002, Tim F., a 17-year-old liver transplant patient, received 40,000 units of erythropoietin weekly, beginning immediately after his transplantation procedure.1 His family had purchased the product from the local CVS Pharmacy, upon his discharge from a Manhattan hospital. After each injection,...