Project ECHO (echo.unm.edu) is an initiative to expand health care to rural and underserved areas by delivering instruction to health-care workers via tele-­education programs. It provides low-cost, high-impact interventions through a model of delivering expert presentations combined with locally presented case discussions. The aim is to improve health-care capacity in a broad sphere of needs, including substance abuse, hepatitis C, and cancer control. There are over 100 Project ECHO programs globally as part of the Project ECHO Cancer Collaborative.2

Nepal is a country of nearly 30 million, with approximately 1.4 million residents living in the capital city of Kathmandu—where the majority of cancer care for the country is concentrated.2 ASCO has a strong network of oncologists in Nepal stemming from a large number of recipients of ASCO’s International Development and Education Award (IDEA). IDEA is a mentoring program pairing early-career oncologists from low- and middle-­income countries with mentors in the United States and Canada. Despite Nepal being a smaller country, Nepalese recipients account for 6% of IDEA alumni. In addition, ASCO collaborates with two institutions to send volunteers to Nepal on a regular basis for educational exchange through the International Cancer Corps with Health Volunteers Overseas.

APEN kicked off in March 2019 with an in-person Train the Trainer initiative for multidisciplinary care team development, supported by a grant from Celgene. Applicants were selected to participate in multidisciplinary teams and represented eight institutions, primarily from the Kathmandu valley. Participants were invited to register for the APEN pilot program and encouraged to include their colleagues.

Topics for the subsequent 6-month tele-education program were crowdsourced from the participants. The final six-session program included expert presentations on:

Project ECHO engaged ASCO volunteers from all around the world, with faculty dialing in from six different countries.

“I very much appreciate this initiative…to open a dialogue about the issues in cancer care between experts of ASCO and the local teams,” Dr. ­Bosnjak said. “I was very happy that this dialogue was patient-centered and included not only discussion about tumor-directed approaches but also patient- and family-directed ones, such as issues related to supportive and palliative care.” 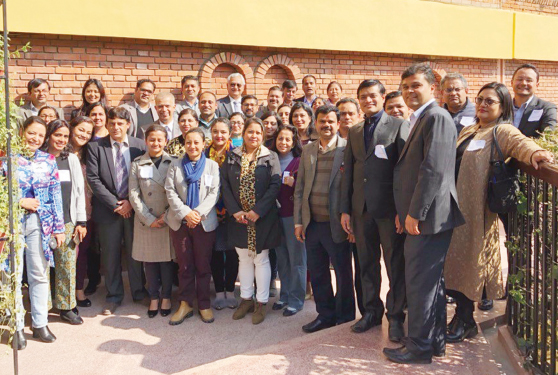 Participants in the APEN Train the Trainer session.

Over 40 people from six institutions completed the APEN program. Approximately half of the participants were primarily involved with delivering gynecologic cancer care; other specialties included clinical oncology, surgery, urology, and pathology. Of those who participated in the end-of-program survey, over 90% could apply one or more changes to their work as a result of participating in each APEN session. One team indicated that they created a new tumor board, while others said that participating in the program helped them improve how they conduct an existing tumor board.

An APEN participant, following the first session, commented, “Cervical cancer is the most common cancer in women in Nepal, and I was unaware of vaginal fibrosis following pelvic radiation and its huge consequences in psychosexual life leading to psychological disorders. This is preventable and treatable as well. With this knowledge, now I can counsel any women undergoing pelvic radiation about the possibility of vaginal fibrosis and stenosis and advise prophylactic vaginal dilatation. In rural areas of Nepal, oncologists or gynecologists are not available every time patients with these conditions present to general practitioners or physicians. Doctors should be aware of postradiation vaginal fibrosis and its psychosexual consequences. Now I can share my knowledge with other doctors working in different rural parts of Nepal.”

The pilot program identified challenges that will be addressed in future iterations, such as the variable quality of Internet connections, which was a barrier for some to fully participate in the sessions.

Looking Ahead: Focus on Latin America

The next collaboration for ASCO and Project ECHO is with the City Cancer Challenge Initiative. In 2019, ASCO and City Cancer Challenge organized two in-person courses in Cali, Colombia, and Asunción, Paraguay, to discuss locally adapted guidelines in cervical and breast cancers. ASCO Project ECHO Latin America (APELA) will consist of two tele-education programs—one in cervical cancer and one in breast cancer—that will bring together the groups from Cali and Asunción to explore relevant topics and present local cases. The sessions will be held in Spanish and facilitated by Higinia Cardenes, MD, PhD, of Weill Cornell Medicine (cervical cancer), and Hugo V. Villar, MD, FACS, of the University of Arizona (breast cancer).

Additional Project ECHO programs are under review. The program holds enormous potential to facilitate relationships between countries, share knowledge and lessons learned, and engage ASCO members from all parts of the globe.