Pembrolizumab in MSI-H and CPS ≥ 10 Advanced Gastric or Gastroesophageal Junction Cancer: Subanalysis of KEYNOTE-059, -061, and -062

The survival benefit of pembrolizumab in advanced gastric/gastroesophageal junction cancer with microsatellite instability–high (MSI-H) tumors or a combined positive score (CPS) ≥ 10 was established in post hoc subanalysis of three KEYNOTE trials. Findings were presented at the 2020 Gastrointestinal Cancers Symposium by KEYNOTE investigators.

Joseph Chao, MD, of City of Hope, ­Duarte, California, examined pembrolizumab’s activity in patients with MSI-H advanced gastric or gastroesophageal cancer by prior line of therapy in these three trials.1 Zev A. ­Wainberg, MD, of the University of California, Los Angeles, presented outcomes in patients with a CPS  ≥ 10.2

The total number of patients included in this analysis from all three trials was 1,357, of whom 67 had tumors with MSI-H status. The number of patients with a CPS ≥ 10 was 336. Median follow-up for these patients ranged from 5.6 months to 17.4 months at the time of analysis, depending on the trial.

Clinically meaningful benefit was observed for progression-free and overall survival with pembrolizumab, Dr. Chao said (Table 1). “We see that, in the third line, pembrolizumab definitely leads to a long-term survival benefit. 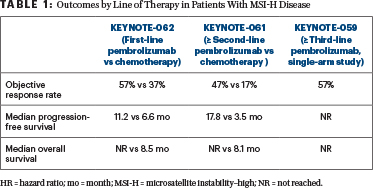 But even in the second line, and in newly diagnosed first-line MSI-H patients, median overall survival is also favored with pembrolizumab over chemotherapy,” Dr. Chao said.

The current indication is for second line and beyond. A number of experts are now recommending that MSI testing be done upfront in patients with stage IV disease, rather than waiting to test in the second line, he said.

The collective analysis of the use of pembrolizumab in the first, second, third, or greater line of therapy in patients with advanced gastric/gastroesophageal junction cancers across three KEYNOTE trials demonstrated improved overall survival compared with chemotherapy in patients with a CPS ≥ 10 status, said Dr. Wainberg. Interestingly, in the cohort of patients with a CPS ≥ 10, overall survival was improved despite lower response rates and shorter progression-free survival (Table 2). 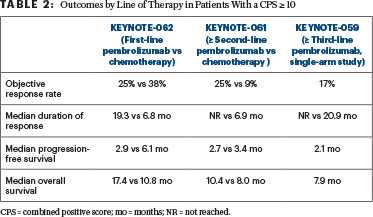 “The response rate with chemotherapy is higher in the front line, but in survival analyses, which is the most important endpoint, there is a much better median overall survival in the patients with a CPS ≥ 10 with pembrolizumab,” he said.

It has become clear that a CPS ≥ 10 is a better biomarker than a CPS ≥ 1, but whether it is better than MSI-H may be a matter of debate. MSI-H status is observed in only 4% to 5% of patients, whereas about 20% of patients have a CPS ≥ 10. “It’s not as robust a biomarker as MSI-H, but it [selects for] a larger group of patients,” he said.

Dr. Wainberg further commented that, while pembrolizumab can be given to patients who have a CPS ≥ 1, he “feels a lot better” reserving the drug for patients with a CPS ≥ 10. With the new data, he is “more persuaded to use it earlier and with much less hesitation.”

He cautioned that this is a retrospective post hoc analysis of patients with a CPS ≥ 10, but it is the most comprehensive efficacy analysis to date of a CPS ≥ 10 in the population with gastric/gastroesophageal junction cancers.

The analysis by Chao et al “highlights how well patients with MSI-H tumors do, compared to microsatellite-stable patients, and how much better they do in a randomized setting, being exposed to immunotherapy as compared to standard-of-care chemotherapy…The data also show that this is a...