Women were more likely to have breast cancer that was overdiagnosed than to have earlier detection of a tumor that was destined to become large.
— H. Gilbert Welch, MD, and colleagues

In a study using Surveillance, Epidemiology, and End Results (SEER) data reported in The New England Journal of Medicine, H. Gilbert Welch, MD, of Dartmouth Institute for Health Policy and Clinical Practice, and colleagues found that screening mammography has resulted in a substantial increase in the detection of small breast tumors, many of which represent overdiagnosis, accompanied by only a modest decrease in the detection of larger breast tumors.1 Their analysis also indicated that the reduction in breast cancer mortality after implementation of screening is mainly the result of improved systemic therapy.

In the analysis, SEER data from 1975 through 2012 were used to calculate the tumor-size distribution and tumor size–specific incidence of breast cancer among women aged ≥ 40 years. Tumor size–specific cancer case fatality rates over 10 years were examined for two time periods: a baseline period before the implementation of widespread screening mammography (1975–1979) and a period including the most recent years, for which 10 years of follow-up data were available (2000–2002). The denominator for the case fatality rate was the number of women receiving a diagnosis of breast cancer at the beginning of a 10-year period, and the numerator was the number of deaths from breast cancer within 10 years after diagnosis.

On the assumption that the true underlying incidence of clinically meaningful cancer has remained unchanged (based on the observation that the rates of metastatic disease at diagnosis have been steady for decades, despite screening), the data suggest that 30 cases of cancer/100,000 women would have become large but were detected earlier, and the remaining 132 cases of cancer per 100,000 women were overdiagnosed—ie, screening-detected cancer cases that never would have led to clinical symptoms. 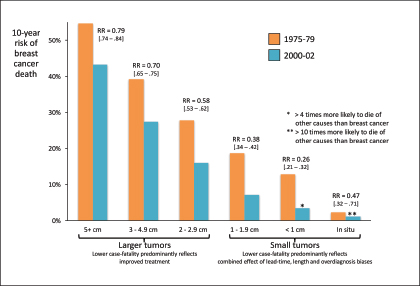 Effects of Screening and Improved Treatments

As stated by the investigators: “The potential of screening to lower breast cancer mortality is reflected in the declining incidence of larger tumors. However, with respect to only these large tumors, the decline in the size-specific case fatality rate suggests that improved treatment was responsible for at least two thirds of the reduction in breast cancer mortality.”

The investigators concluded: “Although the rate of detection of large tumors fell after the introduction of screening mammography, the more favorable size distribution was primarily the result of the additional detection of small tumors. Women were more likely to have breast cancer that was overdiagnosed than to have earlier detection of a tumor that was destined to become large. The reduction in breast cancer mortality after the implementation of screening mammography was predominantly the result of improved systemic therapy.” ■

Disclosure: For full disclosures of the study authors, visit www.nejm.org.

Overall Survival With the Addition of Daratumumab to VMP in Newly Diagnosed, Transplant-Ineligible Multiple Myeloma