On February 26, 2016, obinutuzumab (Gazyva) was approved for use in combination with bendamustine (Bendeka, Treanda) followed by obinutuzumab monotherapy for treatment of patients with follicular lymphoma who have relapsed after or are refractory to a rituximab (Rituxan)-containing regimen.1,2

Approval was based on demonstration of improved progression-free survival in an open-label phase III trial in which 321 patients with follicular lymphoma who had no response to or progressed during or within 6 months of a rituximab-containing regimen were randomized to receive six cycles of obinutuzumab plus bendamustine followed by continued obinutuzumab monotherapy for up to 2 years (n = 155) or six cycles of bendamustine (n = 166). Obinutuzumab was given by intravenous (IV) infusion at a flat dose of 1,000 mg on days 1, 8, and 15 of cycle 1, on day 1 of cycles 2 to 6, and then every 2 months until disease progression for up to 2 years. Bendamustine was given via IV infusion on days 1 and 2 for all treatment cycles (1–6) at 90 mg/m2/d when given in combination with obinutuzumab and at 120 mg/m2/d when given alone. The trial also enrolled 46 patients with marginal zone lymphoma and 28 with small lymphocytic lymphoma, who are not included in the efficacy analysis but are included in the safety analysis. 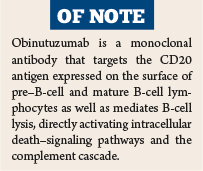 Overall, patients had a median age of 63 years, 88% were white, 56% were male, 34% had bulky disease (> 6 cm), 15% had at least one B symptom, and 95% had an Eastern Cooperative Oncology Group status of 0 or 1 at baseline. The median number of prior therapies was two (range = 1–10), with 46% receiving one and 33% receiving two prior therapies; 20% were refractory to monotherapy; 37%, to rituximab plus chemotherapy induction; 41%, to rituximab maintenance after rituximab plus chemotherapy induction; and 79%, to both rituximab and an alkylating agent during any prior regimen.

For combination treatment with bendamustine in patients with follicular lymphoma, each dose of obinutuzumab is 1,000 mg given via IV infusion in 28-day cycles on days 1, 8, and 15 of cycle 1 and day 1 of cycles 2 to 6; patients achieving stable disease, complete response, or partial response to the initial six cycles should continue on 1,000 mg every 2 months for 2 years. The recommended dose of bendamustine is 90 mg/m2 via IV infusion on days 1 and 2 of cycles 1 to 6.

All patients should receive premedication before infusion. On the first day of treatment, patients should receive an IV glucocorticoid (20 mg of dexamethasone or 80 mg of methylprednisolone) at least 1 hour before obinutuzumab and 650 to 1,000 mg of acetaminophen and an antihistamine (eg, 50 mg of diphenhydramine) at least 30 minutes before treatment. For all subsequent doses, all patients should receive acetaminophen; those with grade 1 or 2 infusion reactions should also receive antihistamine, and those with a grade 3 infusion reaction or a lymphocyte count > 25 × 109/L should also receive glucocorticoid treatment. All patients at high risk of tumor-lysis syndrome (those with a high tumor burden, circulating absolute lymphocyte counts > 25 × 109/L, or renal impairment) should receive prophylactic hydration and antihyperuricemics (eg, allopurinol or rasburicase). Antimicrobial prophylaxis is strongly recommended for patients with grade 3 or 4 neutropenia lasting more than 1 week, and antiviral and antifungal prophylaxis should be considered.

For grade 4 infusion reactions, obinutuzumab infusion should be stopped immediately and treatment permanently discontinued. For grade 3 reactions, infusion should be interrupted; if symptoms resolve, infusion can be resumed at no more than half the previous rate and, in the absence of further symptoms, escalated as previously noted. Treatment should be discontinued for a grade 3 reaction on rechallenge. For grade 1 or 2 reactions, the infusion rate can be reduced or infusion interrupted; if symptoms resolve, infusion can be continued or resumed, with escalation as previously noted in the absence of further reaction.

Hypotension may occur during infusion; withholding of antihypertensive treatment for 12 hours prior to and throughout each infusion and for the first hour after administration should be considered. Treatment interruption should be considered in patients experiencing infection, grade 3 or 4 cytopenia, or grade ≥ 2 nonhematologic toxicity.

Health-care professionals should report all serious adverse events suspected to be associated with the use of any medicine or device to FDA’s MedWatch Reporting System by completing a form online at http://www.fda.gov/medwatch/report.htm, by faxing (1-800-FDA-0178), by mailing the postage-paid address form provided online, or by telephone (1-800-FDA-1088).

Obinutuzumab carries a boxed warning for hepatitis B virus reactivation, which has resulted in fulminant hepatitis, hepatic failure, and death in some cases, and for progressive multifocal leukoencephalopathy, which has resulted in death. Obinutuzumab also has warnings/precautions for infusion-related reactions, tumor-lysis syndrome, neutropenia, thrombocytopenia, and immunization. Patients should not receive live virus vaccines prior to or during obinutuzumab treatment. Blood cell counts, renal function, and fluid balance should be monitored, and patients should be evaluated for infection and bleeding. Obinutuzumab is likely to cause fetal B-cell depletion. ■