Anticoagulation in Patients With Cancer: Understanding the Complexities of Prophylaxis and Management

We can reduce the risk of venous thromboembolism by about 50%, but there are associated side effects and costs. That is why it is important to risk-stratify patients.

The ASCO Post asked an expert in the area of anticoagulation, Jean M. Connors, MD, to share her thoughts on this important topic. Dr. Connors is Medical Director of the Hemostatic Antithrombotic Stewardship and Anticoagulation Management Services at Brigham and Women’s Hospital and Dana-Farber Cancer Institute and Assistant Professor, Harvard Medical School, Boston.

Why should we be concerned about venous thromboembolism in cancer patients?

In the average ambulatory cancer population, the overall risk of venous thromboembolism is 4% to 6%; however, this risk is clearly higher with certain tumor types—gastrointestinal cancers, especially gastric and pancreatic disease, along with lung cancer and a few others. Risk is increased for the first 3 months after diagnosis and accumulates over time. Bleeding complications are also increased in cancer patients, both with treatment and with the use of thromboprophylaxis.

We can reduce the risk of venous thromboembolism by about 50%, but there are side effects and costs associated with this strategy. That is why it is important to risk-stratify patients: to target the high-risk groups who are likely to realize the most benefit with the least harm.

So, we target patients at highest risk. How do we determine this?

There are a number of risk-stratification scores developed to try to identify patients at significantly increased risk. The most validated and easiest to use is the Khorana score, a simple model [developed by Alok Khorana, MD, and colleagues] that predicts thrombosis risk based on a collection of baseline clinical and laboratory variables—type of cancer, BMI [body mass index], and complete blood cell count (platelet, leukocyte, hemoglobin).1

The Khorana multivariate scoring model was applied in a derivation cohort of 2,701 cancer outpatients and validated in an independent cohort of 1,365 patients and is simple to use (Table 1).1 You can compile this risk assessment score and determine the risk for the individual patient. Patients at very high risk—those with Khorana scores ≥ 3—are intuitively likely to benefit from prophylaxis.

Is the use of prophylaxis for high-risk patients restricted to the hospital setting, or is it beneficial in any group of outpatients?

Venous thromboembolism prophylaxis is indicated for hospitalized cancer patients and those undergoing cancer-associated surgery. There has been a push over the past couple of years to adapt prophylaxis for ambulatory cancer patients undergoing chemotherapy, but this remains controversial, as studies involving all types of cancer patients result in only a modest overall incidence of venous thromboembolism. The consensus is that prophylaxis should not be given to all ambulatory patients, with the exception of persons with multiple myeloma receiving treatment with immunomodulatory agents.

A study by Khorana and colleagues presented at the 2015 American Society of Hematology (ASH) Annual Meeting, however, did examine the use of the low–molecular-weight heparin dalteparin [Fragmin] in a randomized trial of 98 outpatients deemed at very high risk, with Khorana scores ≥ 3.2 Venous thromboembolic events occurred in 12% on the dalteparin arm and 21% in the control arm, showing a 9% absolute risk reduction and a 42% relative risk reduction with dalteparin (95% confidence interval [CI] = 0.23–1.89). Major bleeding was similar in each arm, but clinically relevant bleeding was higher with dalteparin. Although there was a reduction in the number of venous thromboembolic events in ambulatory patients at high risk, the decrease in venous thromboembolism was associated with increased clinically relevant (though nonmajor) bleeding (see “Selected Abstracts From 2015 ASH Annual Meeting: Part 3,” in the March 10, 2016, issue of The ASCO Post).

Is the prophylactic and therapeutic management of venous thromboembolism different in patients with primary central nervous system (CNS) tumors or metastatic tumors in the brain?

Emerging data suggest that patients with primary CNS tumors or CNS metastases do relatively well on anticoagulation, but the data are from retrospective analyses. Venous thromboembolism prophylaxis and treatment in these patients have to be highly individualized and carefully monitored. The majority of patients in these analyses have had treatment, either systemic or localized to the brain metastases, which must be considered when assessing a patient with a CNS tumor and venous thromboembolism.

A study presented by Chatree Chai-Adisaksopha at ASH 2015 evaluated low–molecular-weight heparin in patients with primary or metastatic brain tumors, compared with patients with cancers but no CNS involvement. They found no differences in recurrent venous thromboembolism, major bleeding, or clinically relevant bleeding, though intracranial bleeding occurred more frequently in patients with brain tumors.3

What is the recommended duration of therapy for thrombosis associated with the use of catheters?

The general consensus is to treat for 3 months even if the line is removed. But if the catheter is still present, anticoagulation is continued while the catheter remains in place.

What is the best front-line therapy for cancer-associated venous thrombo­embolism?

Currently, in cancer patients with a new venous thromboembolism diagnosis, all societies endorse the use of low–molecular-weight heparin as first-line therapy during the first 3 to 6 months after the venous thromboembolism diagnosis. This is largely based on the 2003 CLOT study, which found that low–molecular-weight heparin had better efficacy than warfarin in preventing recurrent blood clots.4

During the 6-month study period, 27 of 336 patients in the dalteparin group had recurrent venous thromboembolic events, as compared with 53 of 336 patients on warfarin (hazard ratio [HR] = 0.48; P = .002). The probability of recurrent venous thromboembolism was 9% and 17%, respectively, with a risk reduction of 52%. Reanalyzing the data using competing risks methods instead of Kaplan-Meier survival rates demonstrated that the venous thromboembolism recurrence rate was still reduced by 30%. No significant differences were observed in the rates of bleeding. It is also important to note that a post hoc analysis indicated that, at 12 months (ie, 6 months post treatment, off therapy), a mortality benefit was noted for dalteparin in the subgroup of patients without metastatic disease (20% vs 36%, HR = 0.50, 95% CI = 0.27–0.95).5

Fondaparinux, a synthetic pentasaccharide that is not a low–molecular-weight heparin but an indirect factor Xa inhibitor, is the most easily tolerated injection, with no associated stinging or burning; however, its long half-life of 17 hours makes it less suitable for those at risk of bleeding. Enoxaparin (a low–molecular-weight heparin) at 1mg/kg twice daily is probably the safest choice in patients at high risk for bleeding, given its short half-life. For many patients, however, we select whichever parenteral agent—enoxaparin, dalteparin, or fondaparinux—is covered by their insurance. Some cancer patients are required to pay $3,000 to $4,000 per month, which is cost prohibitive for many patients.

Do specialty and society guidelines differ in any important ways in terms of their recommendations?

We have guidelines from the NCCN [National Comprehensive Cancer Network], ASCO, the ACCP [American College of Clinical Pharmacology], ESMO [European Society for Medical Oncology], and GFTC [Groupe Francophone Thrombose et Cancer]. All of these guidelines presently state that for cancer patients with new blood clots, treat with low–molecular-weight heparin for the first 3 to 6 months. After that, the guidelines vary somewhat in terms of next-step recommendations.

Do direct factor Xa or IIa inhibitors have a role in cancer-associated venous thromboembolism? 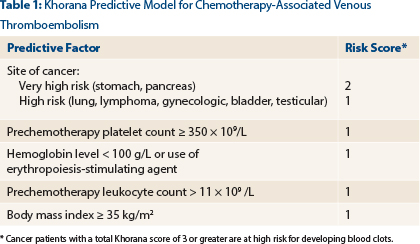 Several studies presented at ASH 2015 evaluated the safety and efficacy of rivaroxaban (Xarelto), the first direct oral anticoagulant to become FDA-approved for the treatment of venous thromboembolism. Two separate studies showed the rate of new or recurrent venous thromboembolism was 4.3%,6,7 but major bleeding rates differed. They ranged from 1.1% in a prospective quality initiative study by Simon Mantha, MD, MPH, and colleagues (which excluded patients with active gastrointestinal or genitourinary cancer, whose risk might be higher) to 10.8% in a retrospective review from Huntsman Cancer Center (see “Selected Abstracts” in The ASCO Post, March 10, 2016). The authors of these two studies concluded that rivaroxaban may be a safe and acceptable alternative to dalteparin in the treatment and secondary prevention of cancer-associated thrombosis.

A third study presented at ASH 2015, a single-center analysis in a retrospective comparison with dalteparin by Ateefa Chaudhury, MD, et al, also showed no efficacy or safety differences between these treatments.8

Do you have any guidance for managing patients beyond 6 months?

There are really no data to guide us here. The current standard is to continue patients on anticoagulation if they have persistent cancer or remain on treatment. With the current trend toward maintenance therapy in a number of malignancies, this can mean lengthy treatment that is expensive or inconvenient for many patients.

An important study that might provide some data was presented at ASH 2015 by Chatree Chai-Adisaksopha, MD, and colleagues, demonstrating that some patients can be switched from low–molecular-weight heparin to warfarin after 6 months.9 The study evaluated data from the RIETE Registry, selecting 1,502 patients who completed 6 months of low–molecular-weight heparin, then either continued low–molecular-weight heparin or switched to warfarin at the treating physician’s discretion. They found no statistically significant difference in recurrent venous thromboembolism between these groups (HR = 0.67, 95% CI = 0.44–1.02, P = .06) and no difference in major bleeding or total bleeding, although the number of events in both groups was low (see “Selected Abstracts” in The ASCO Post, March 10, 2016).

The authors concluded that in patients with cancer-associated thrombosis who complete 6 months of anticoagulation, switching to warfarin does not increase the risk of recurrent venous thromboembolism, major bleeding, or total bleeding as compared to continuing low–molecular-weight heparin in selected patients. It showed that warfarin can be an acceptable alternative anticoagulant in patients who, for one reason or another, do not desire long-term treatment with low–molecular-weight heparin.

Aside from the scenario of switching from low–molecular-weight heparin after 6 months, are there other situations where you would use warfarin?

I think there is also a role for warfarin in other patients: those who are on a treatment that does not affect warfarin metabolism, patients with low–thrombotic-risk tumors, those who are unable to give themselves daily injections, and patients who cannot afford low–molecular-weight heparin, which can cost $4,000 a month for those with poor insurance coverage.

For many patients with cancer, warfarin can be an acceptable anticoagulant, and we have retrospective data from the nonrandomized RIETE Registry showing that switching to warfarin at 6 months is as good as maintaining patients on low–molecular-weight heparin.9 Retrospective analysis of our data by Ariela Marshall and myself also demonstrate that for those patients deemed eligible for warfarin or for those who cannot afford or tolerate parenteral agents, the efficay and safety of warfarin are not inferior.10 Recent data from the CATCH trial also found no statistically significant difference between tinzaparin (not available in the United States) and warfarin in the upfront treatment of venous thromboembolism in cancer patients. However, the patient population in this study may have been different from that in the CLOT study.11

How are clinicians managing patients in the real world? Are they following the guidelines and practices we’ve discussed?

Despite the guidelines, in many patients it is impractical to use injectable or parenteral agents, and so, in the real world the guidelines are not always followed. In the study we discussed from the RIETE Registry, it was the clinician’s decision whether to continue low–molecular-weight heparin or switch to warfarin, and we saw that 739 of the 1,502 patients were switched.9 In these cases, the physician apparently determined the patient was a good candidate for warfarin (see “Selected Abstracts” in The ASCO Post, March 10, 2016).

Finally, how does the cost of anticoagulation figure into the management equation, or should it?

My colleagues Nathan Connell, MD, MPH, and Greg Abel, MD, MPH, and I aimed to characterize the effectiveness and costs associated with two management strategies for cancer-associated venous thromboembolism and presented our findings at ASH 2015.13 We concluded that while low–molecular-weight heparin is an effective treatment, it offers only a small gain in quality-adjusted life-years (QALYs) compared to warfarin, and that this gain is associated with a significant increase in cost.