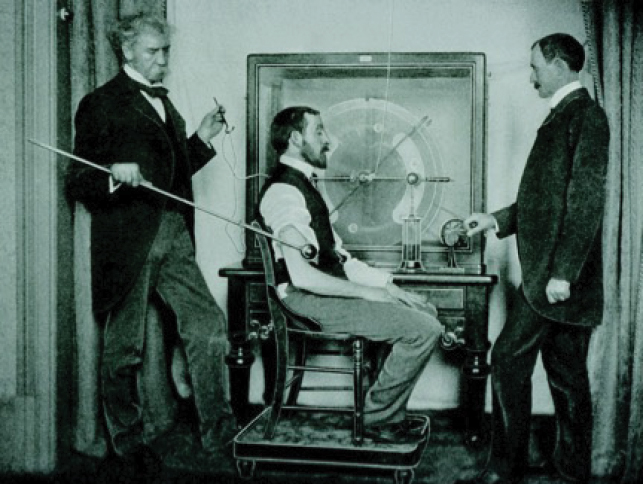 Fascination with electricity reached its peak in the last decades of the 19th century. Thomas Edison’s invention in 1879 of a practical light bulb set the stage for thousands of new devices. When Edison and Westinghouse created direct current (DC) and alternating current (AC) delivery plants, electricity was tamed for the benefit of mankind. English and German scientists had been experimenting with cadavers and electricity demonstrating some life activity—muscular movements with electric stimulation. The idea of electricity as a potential life-giving element was placed firmly into popular culture by Mary Shelley’s Frankenstein, published in 1816.

Physiologists ultimately found the electric potential of basic cellular life forces, further validating the use of electrical stimulation. In the late 1850s, pioneer French neurologist Duchenne de Bologne, MD, used electricity to show neural and muscular activity in the normal and abnormal states, providing further evidence of the use and importance of electricity in both the normal and disease states. In 1861–1862, he published the first book with medical photographs. During the 1860s and 1870s, a multitude of machinery was developed to deliver electricity in various forms.

In this photograph, a large static charge machine is being used to treat a patient with neuralgia from a neuroma. By this time, almost every disease from cancer to allergy was treated by various electrical charges. During its time, the static machine procedure was quite an impressive technique, and patients as well as physicians believed they were involved in the most advanced techniques in medical therapy. Electrical delivery devices used for medical treatment, diagnosis, research, and therapy were considered miracles, much like the laser of today. Although the general lack of clinical response led to the ultimate demise of electrotherapeutic machines, in some instances the “miracle” actually proved to be true. Through electrical studies of cathode ray tubes and other physical apparatus, the x-ray was developed. Electrocautery is still used in surgery, and electrical-stimulation implants are used in both pain relief and wound healing and are noteworthy remnants of electrotherapy. ■