Wrestling With the Challenges of Breast Cancer 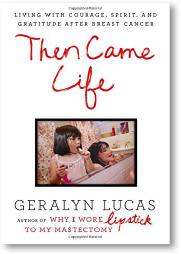 For 16 years, I have been walking that tightrope with cancer on one side and life on the other.

Over the past decade or so, the oncology community has increased its understanding and recognition about issues and challenges faced by our growing survivorship community. A universal challenge among survivors is the sudden recognition of mortality that comes with a diagnosis of cancer. From that moment on, a cancer patient moves into survivorship and views life through a lens that looks at the possibility of recurrence. Many cancer patients describe survivorship as a subconscious anticipation, waiting for the next shoe to drop.

Different disease sites also present with cancer-specific challenges. Breast cancer survivors wrestle with such issues as body image and sexual identity as they negotiate their way through life’s ups and downs, which are poignantly captured in the new book by Geralyn Lucas, Then Came Life: Living With Courage, Spirit, and Gratitude After Breast Cancer.

Ms. Lucas was only 27 years old when she was diagnosed with aggressive breast cancer. “Because of my age and the type of cancer, the prognosis wasn’t great: They expected me to have a recurrence within 2 years, and my future recurrence would more than likely be, as they said, treatable, not curable,” writes Ms. Lucas.

Now at age 45, she seemingly has a lot to celebrate, first and foremost being a happily married, 16-year breast cancer survivor with a great career as a television producer and two terrific kids. However, early on in the book, she poignantly summed up her private struggle: “For 16 years, I have been walking that tightrope with cancer on one side and life on the other.”

This metaphor speaks to an important reality that not just breast cancer patients but also all cancer patients share. Ms. Lucas voices the identity quandary that cancer patients face, separating themselves from the disease. And even after 16 years of survivorship, she still walked the tightrope. She further drove home this central issue of survivorship as she stared at herself in the mirror on the anniversary of her mastectomy.

Ms. Lucas writes, “My huge faded-red mastectomy scar seems just as fresh and tender now as it was at first. All these years later, I walk funny, holding one side of my body back protectively so no one can brush against me. My scar is a souvenir from that trauma. It is the badge I wear every day.”

A Sequel of Sorts

Then Came Life is a sequel of sorts to her first memoir published in 2005, Why I Wore Lipstick to My Mastectomy, which chronicles her experience as a 27-year-old, journalism school grad, having just landed her dream job as a reporter for the show 20/20, when she was diagnosed with breast cancer. But Ms. Lucas refused to capitulate to cancer and fall into the 24/7 gloom of victimhood. She penned Why I Wore Lipstick to My Mastectomy, because in her words, “I really thought I was going to die. All the films, all the books, were just so gloomy and traumatic. I wanted to show women that they are so much more than their breasts, that there is life at the other side of the pain.”

So, whereas her first memoir dealt with the shock of a breast cancer diagnosis, with all its rollercoaster, life-altering effects, Then Came Life has a slower, less volatile pace, dealing more with middle-aged angst, which is magnified by the looming shadow of recurrence that all survivors live with. Ms. Lucas mentions this on just about every page, but it never feels redundant; it simply reinforces the reality of survivorship.

The fact that the arc of these two “cancer” memoirs spans 16 years is important to readers of The ASCO Post, speaking directly to the remarkable advances made in oncology. There are also some frank and well-informed talks with her oncologists, which offer insight into the territory of “difficult conversations” between doctor and patient.

Then there’s a sudden tragedy right after Ms. Lucas takes the reader through the emotional ups and downs of her 16th “cancerversary.” Her 39-year-old cousin, Hallie, is diagnosed with stage IV breast cancer. Ms. Lucas nails the shock of diagnosis with pithy, well-informed experience. And she is a good cousin, full of support, giving a detailed description, replete with her own diagnosis flashbacks, of the mind-numbing cancer-diagnosis experience.

However, that’s where, at least for a while, the interesting content for the readers of The ASCO Post ends. This book, compelling as it is at times for Ms. Lucas’ sheer energy, wit, and moxy, has a tendency to read too much like a personal diary, filling the pages with things only she and her tight circle of friends would appreciate.

Such grievances aside, the book closes its final chapters with Ms. Lucas serving as one of the caregivers for her cousin Hallie, who after a brave fight, succumbs to breast cancer. Ms. Lucas, to her credit, treats this section, the book’s most powerful and best written, with the care and decency that dying cancer patients deserve. She writes, “For several days we watch over Hallie in the hospital, until we see the last pulsing vein in her neck…. The finality of it is stunning. My aunt Lydia crawls into bed with her daughter and hugs her baby for the last time…. She doesn’t want to let her go.”

No one wants to let go of a loved one, but sometimes we must, as Ms. Lucas ably described in her sometimes soapy, but otherwise sturdy read, especially for women in or near the breast cancer experience. ■